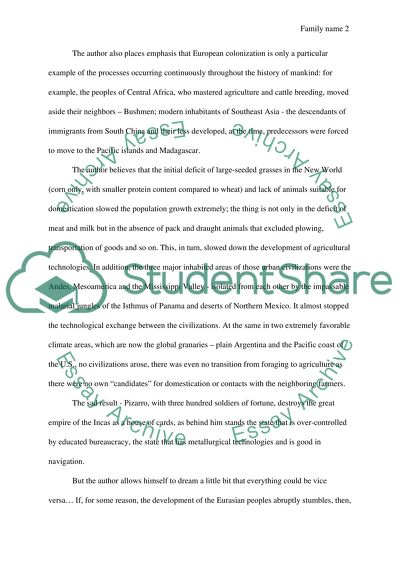 Family … History April 22, Guns, Germs and Steel. Conquest. Jared Mason Diamond is an American ornithologist, physiologist and geographer who rewrote the history of mankind from the naturalistic point of view. Basing on knowledge in geography, botany, zoology, microbiology, linguistics and other sciences, Diamond shows that uneven development of different human societies in different parts of the world is not an accident and is not a result of racial superiority but a set of factors, conditioned by climate, presence of animals for domestication and many other important reasons.
In the video we see, for example, that the Spanish conquistadores, who colonized America, largely owe their success to the European diseases - aborigines had no immunity from them. The diseases, in turn, were caught from the European livestock. Thus, the history of the modern civilization and current balance of political forces are rooted deeply in the distant pre-literate age.
The movie explains why the Incas and Maya did not use the wheels, though they undoubtedly knew about them and why Fernando Cortés and Francisco Pizarro, with a bunch of mercenaries, managed to conquer these ancient empires and defeat the armies that were 500 times bigger. Western civilization was certainly more advanced technology-wise and it helped it to conquest the Indians in the most rude and violent manner. As a result of this conquest the civilization of the North American Indians was almost completely destroyed. We get to know that Europe dominated the world due to a unique combination of natural and economic factors that made it the most favorable for the development of civilization.
The author also places emphasis that European colonization is only a particular example of the processes occurring continuously throughout the history of mankind: for example, the peoples of Central Africa, who mastered agriculture and cattle breeding, moved aside their neighbors – Bushmen; modern inhabitants of Southeast Asia - the descendants of immigrants from South China and their less developed, at the time, predecessors were forced to move to the Pacific islands and Madagascar.
The author believes that the initial deficit of large-seeded grasses in the New World (corn only, with smaller protein content compared to wheat) and lack of animals suitable for domestication slowed the population growth extremely; the thing is not only in the deficit of meat and milk but in the absence of pack and draught animals that excluded plowing, transportation of goods and so on. This, in turn, slowed down the development of agricultural technologies. In addition, the three major inhabited areas of those urban civilizations were the Andes, Mesoamerica and the Mississippi Valley - isolated from each other by the impassable malarial jungles of the Isthmus of Panama and deserts of Northern Mexico. It almost stopped the technological exchange between the civilizations. At the same in two extremely favorable climate areas, which are now the global granaries – plain Argentina and the Pacific coast of the U.S., no civilizations arose, there was even no transition from foraging to agriculture as there were no own “candidates” for domestication or contacts with the neighboring farmers.
The sad result - Pizarro, with three hundred soldiers of fortune, destroys the great empire of the Incas as a house of cards, as behind him stands the state that is over-controlled by educated bureaucracy, the state that has metallurgical technologies and is good in navigation.
But the author allows himself to dream a little bit that everything could be vice versa… If, for some reason, the development of the Eurasian peoples abruptly stumbles, then, around 5500 AD, the colonial vessels of the Indians, armed with firearms, could reach the European lands. Well, a good plot for a sci-fi movie.
References
Guns, Germs and Steel. Dir. Tim Lambert, Richard Bradley. National Geographic and PBS, 2004. Read More
Share:
Tags
Cite this document
(“Conquest-part 2 Guns,Germs and Steel Essay Example | Topics and Well Written Essays - 500 words”, n.d.)
Conquest-part 2 Guns,Germs and Steel Essay Example | Topics and Well Written Essays - 500 words. Retrieved from https://studentshare.org/history/1641661-conquest-part-2-gunsgerms-and-steel

The Collapse And Recovery Of Societies

...did not reach their isolated territories too (Diamond, 2005, 2). Hence, the Incas faced the problem of poor access to resources and knowhow regarding warfare technology. Through the “steel” part of the colonization process, a hundred conquistadores were enough to wipe out tens and thousands of natives. Another problem that humans posed to older civilizations is a form of natural biological weapon, the spread of germs. In Episode 3 of Guns, Germs, and Steel, Diamond (2005) described how European diseases single-handedly exterminated thousands of natives. He stressed the power of germs to weaken, not only...
5 Pages(1250 words)Essay

Guns, Germs, and Steel: The Fate of Human Societies

...?Guns, Germs, and Steel: The Fate of Human Societies Table of Contents Table of Contents 2 Introduction 3 Thesis ment 4 Guns, Germs, and Steel: The Fates of Human Societies: A Review 4 Conclusion 8 Work Cited 10 10 Introduction Tracing the developmental history of human civilization and its battle for sustenance through myriad twists and turns of external factors was not so easy. Human civilization and its actual trajectory have always been enigmatic and there are only a few insightful and fact–filled documentations on the hegemony of races and overreaching of one civilization over the other. The book,...
6 Pages(1500 words)Book Report/Review

...7 October A Response to Jared Diamond’s Guns, Germs and Steel In his book “Guns, Germs, and Steel”, Jared Diamond raises some critical questions about the uneven distribution of wealth, control and authority throughout the entire civilizations of the world, and asks how this precedent started off. In his book, he wrote: “For instance, why weren’t Native Americans, Africans, and Aboriginal Australians the ones who decimated, subjugated or exterminated Europeans and Asians?” (Diamond 15). He recognizes the control and ownership of guns, germ, and steel as the crucial explanation, marking...
3 Pages(750 words)Essay

Guns Germs and Steel the Fates of Human Society

...section of the book is known by the name, ‘From Food To Guns , Germs, And Steel’ and under this section there are four chapters namely ‘Lethal Gift of Livestock’, ‘Blueprints and Borrowed Letters’, ‘Necessity’s Mother’, and ‘ From Egalitarianism to Kleptocracy’. Part four of the book is titled as ‘Around the World in Five Days’ and consists of five chapters titled as ‘ Yali’s People’, ‘How China Became Chinese’, ‘Speedboat to Polynesia’ and ‘How Africa Became Black’ (Diamond, “Guns, Germs, and Steel: The Fates of Human Societies”). The prologue of the book is very unconventional and interesting. At the outset itself the...
5 Pages(1250 words)Book Report/Review

Evaluation Forms and their Application

Project management and how it relates to purchasing and supply management

...Guns, Germs, and Steel Guns, Germs and Steel: The Fates of Human Societies was ed by Jared Diamond in 1997. The book is transdisciplinary nonfiction, which discusses the survival tactics of Eurasian civilizations like North America. In addition, the book argues against the Eurasian hegemony which is attributed to inherited genetic superiorities and Eurasian intellectual morals (Diamond 2). According to Diamond, the power and technological gaps existing between human societies come as a result of environmental differences. These differences are enlarged by different positive feedback loops (Diamond 3). For instance, if...
2 Pages(500 words)Movie Review

...and take over other people’s culture. As Diamond explains, the conquest of Peru by the imperial Spanish came to a climax in 1562 when the Spanish Conquistador Francisco Pizarro conquered Inca emperor Atahualpa. During this battle, several things happened which actually proved how the culture of germs, guns and steel could be used in manipulating an already existing empire. I would like to begin by saying that Francisco successfully used guns to win the battle against his opponents. Although the emperor of Inca had a lot of soldiers in his base at Cajamarca, Peru, he was still defeated by his Spanish invaders who only had a handful of soldiers. To, the...
4 Pages(1000 words)Book Report/Review

12 Pages(3000 words)Essay
sponsored ads
Save Your Time for More Important Things
Let us write or edit the essay on your topic "Conquest-part 2 Guns,Germs and Steel" with a personal 20% discount.
GRAB THE BEST PAPER

Let us find you another Essay on topic Conquest-part 2 Guns,Germs and Steel for FREE!