Comments (0)
Add to wishlistDelete from wishlist
Cite this document
Summary
Despite a small group of Germans living in Sudetenland, the Germans had no right to annex the defenceless Czechoslovakia in 1939. At the Munich’s conference, the Czechs were not invited, yet…
Download full paperFile format: .doc, available for editing
HIDE THIS PAPERGRAB THE BEST PAPER97% of users find it useful 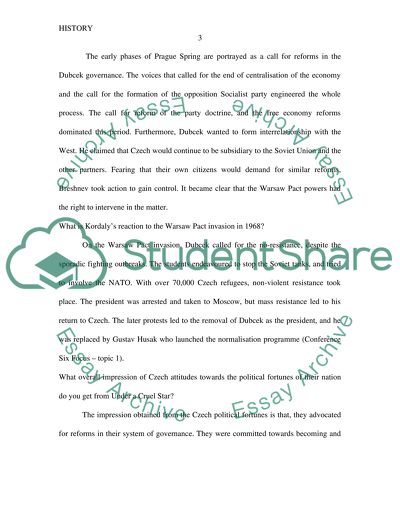 Cold War in Europe of Establishment Cold War in Europe Section How does the book Under a Cruel Star regard the Nazi occupationof Czechoslovakia?
The book describes the Nazi’s occupation of Czechoslovakia as non-ceremonial. Despite a small group of Germans living in Sudetenland, the Germans had no right to annex the defenceless Czechoslovakia in 1939. At the Munich’s conference, the Czechs were not invited, yet Hitler’s demand for Sudetenland was approved.
What is the initial impression of Communism in Czechoslovakia as Kovlay describes it?
Communism was not so popular in Czechoslovakia. There were stronger socialist parties, and the communist parties faded away with time because they were subservient to the Russians. There was also a determination for Czech to be an independent nation.
How does her attitude towards Communist rule change? What specific events crystallized this change for her?
The attitude of the writer towards communism changes when the Soviets take the occupation of Czech in the 1946 elections. After the Yalta agreement that ended the brutal German rule, there was a reprieve as the pre-war president, Edward Benes takes power. The communists did well in these elections, but they did not form the majority government. They later took the power and instigated their rule with initiation of a one party state.
How are the early phases of the “Prague Spring” portrayed in the book?
The early phases of Prague Spring are portrayed as a call for reforms in the Dubcek governance. The voices that called for the end of centralisation of the economy and the call for the formation of the opposition Socialist party engineered the whole process. The call for reform of the party doctrine, and the free economy reforms dominated this period. Furthermore, Dubcek wanted to form interrelationship with the West. He claimed that Czech would continue to be subsidiary to the Soviet Union and the other partners. Fearing that their own citizens would demand for similar reforms, Breshnev took action to gain control. It became clear that the Warsaw Pact powers had the right to intervene in the matter.
What is Kordaly’s reaction to the Warsaw Pact invasion in 1968?
On the Warsaw Pact invasion, Dubcek called for the no-resistance, despite the sporadic fighting outbreaks. The students endeavoured to stop the Soviet tanks, and tried to involve the NATO. With over 70,000 Czech refugees, non-violent resistance took place. The president was arrested and taken to Moscow, but mass resistance led to his return to Czech. The later protests led to the removal of Dubcek as the president, and he was replaced by Gustav Husak who launched the normalisation programme (Conference Six Focus – topic 1).
What overall impression of Czech attitudes towards the political fortunes of their nation do you get from Under a Cruel Star?
The impression obtained from the Czech political fortunes is that, they advocated for reforms in their system of governance. They were committed towards becoming and independent state with a democratic setting. The focus to development, other than war, was a gallant step towards their growth.
Section 2
What events in the period between 1947-1953 marked the hardening of the division of the continent into two hostile camps? (Be specific)
The events that marked the hardening of the division of the continent include the communist control of the cabinet, and the introduction of the Marxist-Leninist state.
How did Stalin consolidate Soviet control of Eastern Europe?
Stalin consolidated the Soviet control by the Marxist-Leninist system. The central economic system, forced industrialisation, collectivisation of private property, and removal of political and religious organisations hardened this consolidation.
What western steps contributed to this escalating chain of events?
The Western steps that led to these escalating events include the British support of the occupation of the Czech by the Germans. The German massacres also welcomed the Russians to establish their rule (Conference Six Focus – topic 1).
What was the impact of the Cold War in Europe?
The cold war led to the stabilisation of Europe as a continent. The boundaries of the conflict were clarified leading to this stabilisation. It also led to economic legacies that led to establishment of economically stable countries. It also led to emergence of military legacies with superpower countries getting established. It also led to security through the stabilisation of the nuclear energy programs and the control of weapons.
How did Europeans in the 1960s, both East and West, attempt to transcend the division of the continent into two Cold War camps?
Most countries opted for neutrality to transcend against the division of the two continents. Some countries build allies such as France with the Czech. This ensured an understanding between them hence fostering ties and security.
References
Conference Six Focus - Topic 1 Read More
Share:
Tags
Cite this document
(“Cold War in Europe Assignment Example | Topics and Well Written Essays - 500 words”, n.d.)
Cold War in Europe Assignment Example | Topics and Well Written Essays - 500 words. Retrieved from https://studentshare.org/history/1641451-cold-war-in-europe

CHECK THESE SAMPLES OF Cold War in Europe

The cold war in Europe

...?It was in 1940, all was quite at the eastern front, Germany and Russia, each hesitant to make the first move toward the other. At this time, Germanycontinued its battles in the west, but kept a keen eye at the eastern front, because the Russians were unpredictable. As the year 194 unfolded, Hitler and his army chose not to invade Britain, because they considered them as weak, and as a result not a threat. His attention was now focused on the east, towards Russia. The Soviet Union, at this time was very strong and united, and its leaders never cherished the thought that Hitler would dare try to attack them. At this time, Russia attempts to pursue its own plans of attacking Finland at the far north. The cold proves to be a...
2 Pages(500 words)Essay

The cold war in Europe

The Struggle to Create Post-Cold War Europe by Mary Sarotte

...?Book Review: 1989: The Struggle to Create Post-Cold War Europe by Mary Sarotte The book ‘The Struggle to Create Post – Cold War Europe’ by Mary Sarotte has been focused on the summer and autumn of 1989. The book focuses on the changes that were found due to the opening of the wall. Here the author also focuses on the struggle that was present in the process of creating the new Europe post the war. Here the author has discussed these details based on Germany as the main crux of the tactful dialogues. The author has developed a study which is concise and to the point and is based on the investigations and interviews of the multinational archrivals (Sarotte 2010). The author, Sarotte, has also been able to effectively bring together... book...
3 Pages(750 words)Essay

...? Cold War Matt Barras Historical Contexts & Literature Lib 316 Prof. Stiene 27 May Cold War According to diplomatic terminologies, there are three basic types of wars. They include the hot war, warm war and the cold war. The cold war is a term used to illustrate the relation between the Soviet Union and America (1945-1991). The war can be described as the persistent military state and political tension amongst the two states (Leffler, 2008). The Soviet Union and its associates branded the Eastern bloc while the United States and their...
8 Pages(2000 words)Essay

...A Critical Evaluation of the US Policy For the Cold War from 1946-1965 After the fall of Germany, for President Harry Truman, the Soviet leaders’ reluctance to retreat from the wartime frontline in Europe and the Middle East was essentially a clear sign of the Communist Imperialism which could severely hamper the United States’ interests in the oil-rich countries in the Middle East and European. After the Potsdam Conference and the uprising in Greece, several factors were clear that the Soviet leaders were not going to give up their control over the Eastern Europe and the Middle East. This perception of Truman’s Administration about the communist Russia’s expansionist...
5 Pages(1250 words)Essay

Explain how the situation in Europe immediately following the fall of Germany led directly to the Cold War. In your opinion, sho

...?Cold War and the end of Soviet domination of Eastern Europe Introduction The Cold War emerged as a major political and diplomatic issue in the era after the Second World War (Folly and Palmer 2010, p.134) as it was majorly a disagreement between the United States and the Soviet Union over issues that had been unresolved since the Russian Revolution of 1917. This occurred as the communist regime considered itself as the ultimate answer that could be used to replace or reshape the existing political order, in both the Western world and the whole world. After the end of World War 11, the United States hoped to instil in...
11 Pages(2750 words)Essay

...Cold War was a unique phenomenon of post WW2 international relations when the two nations, especially the two superpowers: USA; and USSR had developed hostile relations defined by sharp conflicts within political diplomacy and Economic areas. According to Murrin et al. (2011) cold war was not only confined to international relations but it had encompassed myriad aspects of domestic and international conditions which had huge impact on the people at large. He affirms that in international relations, Cold War affects social conditions at the national and local level and may also remain in background and serve as catalyst that may adversely...
1 Pages(250 words)Essay

Europe after the Cold War

...﻿Europe after the Cold War Introduction The Cold War had numerous effects on the past society as well as the current society for instance; Russia experiences a huge cut in military spending (Lieberman, 2010). The ramifications of this were huge since the military and industrial sectors had previously given employment to one out of every seven adults in the USSR. Therefore, the disintegration of the Soviets left a big part of the population across the entire former Union without any form of employment. The legacy of the Cold War persisted after the war was over through continually influencing global...
4 Pages(1000 words)Essay
sponsored ads
Save Your Time for More Important Things
Let us write or edit the assignment on your topic "Cold War in Europe" with a personal 20% discount.
GRAB THE BEST PAPER

Let us find you another Assignment on topic Cold War in Europe for FREE!