Comments (0)
Add to wishlistDelete from wishlist
Cite this document
Summary
The situation for peasants here in France has been quite bad for a very long time. However, the situation that exists right now is intolerable and I do not know how much longer we can…
Download full paperFile format: .doc, available for editing
HIDE THIS PAPERGRAB THE BEST PAPER91.8% of users find it useful 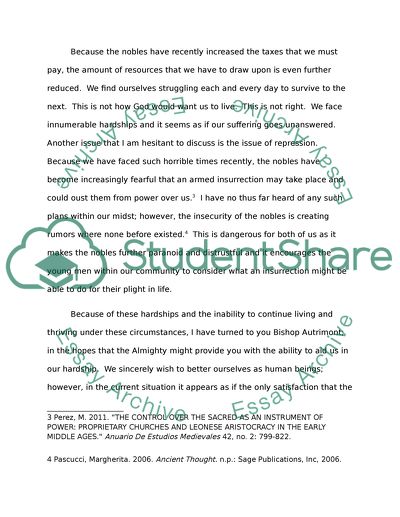 Section/# Letter to the Bishop To his holiness Bishop Rene Autrimont: I am writing this letter to you to begfor your assistance in speaking with the land owners. The situation for peasants here in France has been quite bad for a very long time. However, the situation that exists right now is intolerable and I do not know how much longer we can survive it unless changes are made. Firstly, there is the issue of sanitation and water. Unlike the nobles, our only source for water is local streams and reservoirs; as we do not have a well to drink from. Because our water comes from open sources, it is corrupted by animals, humans, and all manner of things. Several of our small commune have recently died as a result of this corruption. Without a good clean source of water, we are slowly being poisoned to death with the water that we must drink, wash with, and clean.1
Another problem that we are facing has to do with our food. Although it is the peasants that are responsible for toiling endlessly in the soil and making sure that the nobles receive their harvests, the amount of food that we are allowed to keep has been decreasing each and every year it seems. Although I do not say that this is the result of greed, it makes it impossible for us to live and raise our children on ever decreasing rations that are afforded to us.2 And then in addition to all of this, there is the issue of tax.
Because the nobles have recently increased the taxes that we must pay, the amount of resources that we have to draw upon is even further reduced. We find ourselves struggling each and every day to survive to the next. This is not how God would want us to live. This is not right. We face innumerable hardships and it seems as if our suffering goes unanswered. Another issue that I am hesitant to discuss is the issue of repression. Because we have faced such horrible times recently, the nobles have become increasingly fearful that an armed insurrection may take place and could oust them from power over us.3 I have no thus far heard of any such plans within our midst; however, the insecurity of the nobles is creating rumors where none before existed.4 This is dangerous for both of us as it makes the nobles further paranoid and distrustful and it encourages the young men within our community to consider what an insurrection might be able to do for their plight in life.
Because of these hardships and the inability to continue living and thriving under these circumstances, I have turned to you Bishop Autrimont; in the hopes that the Almighty might provide you with the ability to aid us in our hardship. We sincerely wish to better ourselves as human beings; however, in the current situation it appears as if the only satisfaction that the nobles can be troubled to have from us is one in which we are taxed, starved, and diseased to the point that we are no longer able to live as human beings.
Bibliography
Arnold, Benjamin. 2004. Power and Property in Medieval Germany: Economic and Social Change c.900-1300. n.p.: Oxford University Press, 2004. Oxford Scholarship Online, EBSCOhost (accessed April 16, 2014).
Davies, Wendy. 2007. "Lordship and Community: Northern Spain on the Eve of the Year 1000." Past & Present 19-33. SocINDEX with Full Text, EBSCOhost (accessed April 16, 2014).
Pascucci, Margherita. 2006. Ancient Thought. n.p.: Sage Publications, Inc, 2006. Gale Virtual Reference Library, EBSCOhost(accessed April 16, 2014).
Perez, M. 2011. "THE CONTROL OVER THE SACRED AS AN INSTRUMENT OF POWER: PROPRIETARY CHURCHES AND LEONESE ARISTOCRACY IN THE EARLY MIDDLE AGES." Anuario De Estudios Medievales 42, no. 2: 799-822. Arts & Humanities Citation Index, EBSCOhost (accessed April 16, 2014). Read More
Share:
Tags
Cite this document
(“English Peasant Essay Example | Topics and Well Written Essays - 500 words”, n.d.)
English Peasant Essay Example | Topics and Well Written Essays - 500 words. Retrieved from https://studentshare.org/history/1640467-english-peasant

CHECK THESE SAMPLES OF English Peasant

..., Joan was able to fulfill the visions despite the challenges she faced as a woman and a child born from a peasant background without formal education. In addition, she established her place in the king’s court as an important player with men who were old enough to be her grandfather despite her young age. Based on the aforementioned, it is evident that Joan of Arc’s transformation from a peasant and illiterate girl to a sophisticated and inspiring leader is astounding. Not only was she able to become an iconic and prolific figure in the Hundred Years’ War, Joan was an important beacon of hope for the French during their battle with the English. In addition, she represents virtue since...
5 Pages(1250 words)Essay

...?Fahad AL Falahi April/27 Writing 4B People have been killing this world and their own selves from the beginning of time. They have been destroying our plantation by pollution and wars, as they might not have seen it at the time where they started polluting it. The effect of this did not happen over night, rather it happened in a long period of time. But the same has a number of effects; after WW2 many industries sprung out, various factories also started mass production. After a huge economic decline, everybody wanted to be in the gold rush as in those days money was flowing and consumer needs were greater, There are many effects to pollution such as global warming, the widening of the Ozone hole and the increase in diseases... AL Falahi...
3 Pages(750 words)Essay

...? 28 May, Personality and dress: The way a person is dressed does speak volumes about that person’s personality or character. A person’s sense of style reflects in his/her dress. The validity of the argument that a person’s personality reflects in his/her getup can be estimated from the fact that old people generally wear dresses with dull and sophisticated colors like shades of white, grey, or brown, whereas children wear clothes with a myriad of bright and enchanting colors. Children can be seen wearing vibrant clothes. Young people also have a vast range of colors in their dresses but the overall look is much decent and sober as compared to the look of children’s clothes. The validity of this argument can also be judged... 28 May,...
1 Pages(250 words)Essay

...Instruction: Task: English Life is a matter of trials and errors hence there is a fundamental need for humanity to live harmoniously without acrimony. This suggests that; while there are the joys of life, it also has its fair share of tribulations that are uncontrollable. However, such setbacks can be prevented in terms of using medical practices that are safe. Therefore, Oliver Sacks his 1995 book of essays An Anthropology on Mars expounds on seven case studies that important for discussion. For example, by making analysis of conditions and syndromes of his patients and former colleagues, he allows readers to understand several issues (Sacks 145). These include the study on the workings of the brain and the body system...
4 Pages(1000 words)Essay

...English Literature ic and Modern), Essay Topic: English Introduction: The pages of American history are daubed in bloodshed of the blacks and contain accounts of discrimination and victimization of the highest order against them. To an extent history still asks the crying question. Can this country be made heaven-like where there is no trace of racial bias whatsoever? Not the legal provisions alone but human hearts full of positive vibrations, eyes full of understanding and life that refuses conflicts—enough these moral qualities are alone enough to reach that goal. Centuries ago, when slavery was practiced in South America in its crudest form, leave aside the plantation owners and politicians, even the...
4 Pages(1000 words)Essay

...1 Samriddhi Victoria 7 May2006 Vincent Van Gogh : Portrait of a Peasant Vincent Van Gogh,the eldest of six children was born to Theodorus van Gogh and Anna Cornelia Carbentus on on March 30, 1853, in Zundert, a village in Brabant, in the south of the Netherlands. He had a good hold on languages, studying French, English, and German. As Van Gogh matured he found he liked painting stuff that effected him emotionally. He then decided that painting is what he wanted for a living. He moved to Paris. He lived with Theo his relative in Montmartre, an artists' quarter of Paris. The move had a crucial role in the development of his painting style. Theo, who managed the Montmartre branch of...
2 Pages(500 words)Essay

...in 1348. There were also many incidents of robbery and peasants looted of noble's houses and castle which further added to the problems of situations. The disease and its consequences also became reason for English military weakness that in turn resulted in English defeat during the Hundred Years' War. Leadership and Allies Problem The world witnesses downfall in the English fortune after many early victories in the Hundred Years' War. When Edward II died in 1377, the position of England also became week and they lost many territories by 1374. The illness of Edward III further added to the weakness of English as he also suffered from severe diseases for...
9 Pages(2250 words)Essay

...﻿Dead Peasant Insurance Policies Question 1 Insuring top executives in a firm is paramount. Replacing them is usually very expensive and leads to a loss of performance by the firm since they will require spending countless hours recruiting a new corporate leader for the company. It is, however, unethical to cover only the top executives of the firm while ignoring the other employees. All workers are valuable, and they should be covered. It should not be a matter of whom to cover. Question 2 A company owned insurance policy is a good idea if the company observes integrity.. When the company demands that a person seeking for a job has to use the company owned insurance policy, it shows that the company is self-centered and...
2 Pages(500 words)Essay
sponsored ads
Save Your Time for More Important Things
Let us write or edit the essay on your topic "English Peasant" with a personal 20% discount.
GRAB THE BEST PAPER

Let us find you another Essay on topic English Peasant for FREE!