Comments (0)
Add to wishlistDelete from wishlist
Cite this document
Summary
According to Bojana, this article was written with the aim of diverting from the usual simple explanations pertaining to ethnic conflict to dealing with more complex approaches towards peace building and strategies of post-conflicts development in societies that are…
Download full paperFile format: .doc, available for editing
HIDE THIS PAPERGRAB THE BEST PAPER96.3% of users find it useful 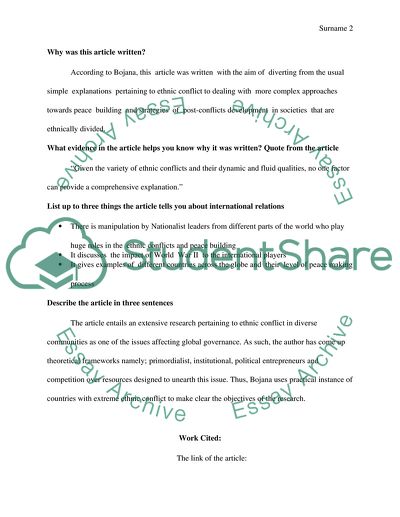 Ethnic Conflict Type of Article This is a research article that explores on the major ethnic conflict theories that are put together to explain the causes of conflict around the world
Citation
Blagojevic, Bojana. “Causes of Ethnic Conflict: a conceptual framework.” Journal of Global Change and Governance 3.1(2009):1-22
List up to five things the author argued that you think are important
There must be continuous examination of the causes of conflict to develop a better understanding of what causes peace breakdown in various multi- ethnic contexts
Each ethnic conflict has unique characteristics where some of the elements are more prominent than others, although all of them serve as common denominators for ethnic conflict
Most institutions are known to contribute towards the regulation of conflict ethical potential levels.
Politicians play a huge role in the exploitation of ethnic difference through the use of historical memories of grievances
The mobilization of ethnic identities by politicians has continuously resulted to ethnic intolerance and competition over rights and resources
Why was this article written?
According to Bojana, this article was written with the aim of diverting from the usual simple explanations pertaining to ethnic conflict to dealing with more complex approaches towards peace building and strategies of post-conflicts development in societies that are ethnically divided.
What evidence in the article helps you know why it was written? Quote from the article
“Given the variety of ethnic conflicts and their dynamic and fluid qualities, no one factor can provide a comprehensive explanation.”
List up to three things the article tells you about international relations
There is manipulation by Nationalist leaders from different parts of the world who play huge roles in the ethnic conflicts and peace building
It discusses the impact of World War II to the international players
It gives examples of different countries across the globe and their level of peace making process
Describe the article in three sentences
The article entails an extensive research pertaining to ethnic conflict in diverse communities as one of the issues affecting global governance. As such, the author has come up theoretical frameworks namely; primordialist, institutional, political entrepreneurs and competition over resources designed to unearth this issue. Thus, Bojana uses practical instance of countries with extreme ethnic conflict to make clear the objectives of the research.
Work Cited:
The link of the article:
http://www.globalaffairsjournal.com/wpcontent/uploads/2011/08/CausesofEthnicConflict.pdf Read More
Share:
Tags
Cite this document
(“Ethnic conflict Assignment Example | Topics and Well Written Essays - 500 words”, n.d.)
Retrieved from https://studentshare.org/history/1635611-ethnic-conflict

CHECK THESE SAMPLES OF Ethnic conflict

Analysis of Ethnic Conflict in KOSOVO

...? Analysis of an Ethnic Conflict (Kosovo) Introduction The collapse of the iron curtain has been a catalyst for the formation and breakaways of various regions within the European communist bloc. The area had already been severely fragmented gaining an infamous reputation as a shatter zone1. Central and Eastern Europe is dotted with small regions that are often antagonistic and are very divided and most people here are on villages united by their ethnicity and are interdependent on each other. This paints a very volatile picture since the area can erupt into civil war especially if inter-ethnic group conflicts are not resolved properly. Furthermore, the...
9 Pages(2250 words)Essay

...?Running Head: Ethnic Conflict Ethnic Conflict [Institute’s Ethnic Conflict Philip Mason s that dominance of one party overanother is as “old as Pharaohs”, meaning that they date back to the times of ancient civilizations. Since there has been a growth in multi-ethnicity in different countries, all around the world, there will be an increase in ethnic conflict in contemporary times (Marger, 2006). After World War II, the dynamics of the world have changed, and the world has witnessed an increase in national and religious self-determination movements across continents, for example, in...
5 Pages(1250 words)Research Paper

How to Resolve an Ethnic Conflict- Case Study of Bosnia

...? Resolving an Ethnic Conflict- Case Study of Bosnia Dustin Ayres Resolving an Ethnic Conflict- Case Study of Bosnia Ethnic conflicts exist in different forms such as cultural, social, and political oppression of the minorities. Powerful communities in a multiethnic society can form cartels in order to control the minorities and deprive them of their share of national resources. Bosnia was a multiethnic society where the Bosnian Muslims were a minority and weak community. Ethnic conflicts are caused by structural factors such as the weakness of a state, changes in the military and geographical location...
3 Pages(750 words)Research Paper

... real and imagined political opponents and ideological opponents. As the years increased, the police officials incarcerated Jews, Roma and other people due to ethnic and racial hatred in those camps. They wanted to monitor their population. In 1945 and 1944, Nazi German government brought millions of Jews from German, from the countries of many of its partners and from the used territories to killing places. They also called extermination camps, those people killed in gassing facilities made. According to Peter Suedfeld, “Theories of the Holocaust: Trying to Explain the Unimaginable,” he did a research to analyze the variables as those who survived the killing about the world and their power over it, general living satisfaction... Unit: In...
3 Pages(750 words)Essay

Why does ethnic conflict occur How can it be avoided

...? Causes of ethnic conflicts and how they can be avoided Ethnic conflict refers to a situation where two or more distinct ethnic group comes up against each other due to ethnic nationalism. In some cases they results to war crimes or genocide which makes them of great interest to the international community. They usually fall under the following categories namely instrumentalist, primordialist and constructivist. Instrumentalist seeks to explain the role of community leaders in ethnic conflict while primordialist relates ethnic conflicts as being caused by a common...
9 Pages(2250 words)Essay

...? Factors that led to the emergence of the Liberation Tigers of Tamil Eelam (LTTE) Introduction After independence, it was assumed that Sri Lanka would flourish among its other newly independent Asian neighbours (DeVotta, 2004). It gained voting rights in 1931, and enjoyed a peaceful transition from colonial rule to a national government in 1948. The minority group in the State comprised mainly of the Tamils and they were noted as a passive in nature and not fond of violence (DeVotta, 2004). Despite these favourable factors, Sri Lanka soon witnessed an ethnic conflict that is considered in the world’s history as the one of the most violent secessionist movements since WWII and “one of the world’s most...
12 Pages(3000 words)Essay

.... In this context, it becomes difficult to justify the claim that aggression is defence, and that it is rational. This essay will elaborate on this assessment by perusing appropriate scholarly resources. Ronald Suny article ‘Why We Hate You: The Passions of National Identity and Ethnic Violence’ attempts to sort through theories of ethnic conflict. It peruses the case of Soviet Union, before and after its collapse, to identify underlying motives of ethnic conflict. The author disagrees with the view forwarded by certain academics that Primordialism, which springs from an innate, natural identity, is at the root of most ethnic...
12 Pages(3000 words)Essay

...Topic 2: Primordialism, Ethnic Conflict and the work of Walker Connor Connor W. “Beyond Reason:  The Nature of the Ethnonational Bond” in Connor (ed.) Ethnonationalism, Princeton University Press, 1994. The reading titled “Beyond Reason: The Nature of the Ethnonational Bond”, written by Walker Connor, will provide the contextual background for this think-piece exercise. The central argument of the author is that ethno-national bond is much stronger than patriotic bond. The basis for the formation of ethno-national bonds are never fully based on fact and evidence, but rather on some vague but convincing feeling of kinship within a group of people. In other words, the concept of ethno-nationality...
12 Pages(3000 words)Annotated Bibliography
sponsored ads
Save Your Time for More Important Things
Let us write or edit the assignment on your topic "Ethnic conflict" with a personal 20% discount.
GRAB THE BEST PAPER

Let us find you another Assignment on topic Ethnic conflict for FREE!