Comments (0)
Add to wishlistDelete from wishlist
Cite this document
Summary
The battle between Christianity and political forces acted as a major setback in the economic and social aspects in Japan during the late 16th and early 17th century. Japan had influenced by foreign missionaries who were aimed at spreading Christianity in Japan but in turn got…
Download full paperFile format: .doc, available for editing
HIDE THIS PAPERGRAB THE BEST PAPER98.9% of users find it useful 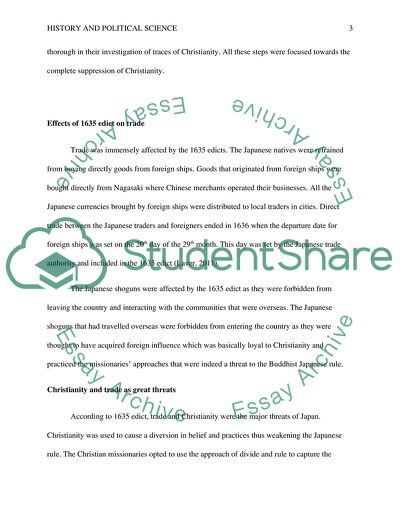 Topic: Conflict between Japanese politics and Christianity Conflict between Japanese politics and Christianity Introduction
The battle between Christianity and political forces acted as a major setback in the economic and social aspects in Japan during the late 16th and early 17th century. Japan had influenced by foreign missionaries who were aimed at spreading Christianity in Japan but in turn got interested in the political and economic aspiration of Japan which was intended to help them gain more masses.
Steps taken to Christianity suppression
Christianity became a major threat to the political influence in Japan thus leading the force of its suppression by the killing of Christian priests and converts. The intense moment of Christianity suppression process came in the year 1635 as a result of the 1635 edicts which forbid the Japanese from any affiliation with foreigners especially the foreign missionaries. The Japanese people were forced to denounce Christianity through either reward or punishment. The rewards included a high political role in the society while the punishment was basically death and intense torture (Laver, 2011). The 1635 edict demanded for all incoming ships to be investigated for Christian priests before entering Japan. A reward was offered if any high ranking priest was located and presented to the authorities. Foreign ships which brought goods to Japan were investigated of any Christian influence. The Japanese citizens were forbidden from leaving or entering the country after staying in overseas for a long time. The Japanese authorities were thorough in their investigation of traces of Christianity. All these steps were focused towards the complete suppression of Christianity.
Effects of 1635 edict on trade
Trade was immensely affected by the 1635 edicts. The Japanese natives were refrained from buying directly goods from foreign ships. Goods that originated from foreign ships were bought directly from Nagasaki where Chinese merchants operated their businesses. All the Japanese currencies brought by foreign ships were distributed to local traders in cities. Direct trade between the Japanese traders and foreigners ended in 1636 when the departure date for foreign ships was set on the 20th day of the 29th month. This day was set by the Japanese trade authority and included in the 1635 edict (Laver, 2011).
The Japanese shoguns were affected by the 1635 edict as they were forbidden from leaving the country and interacting with the communities that were overseas. The Japanese shoguns that had travelled overseas were forbidden from entering the country as they were thought to have acquired foreign influence which was basically loyal to Christianity and practiced the missionaries’ approaches that were indeed a threat to the Buddhist Japanese rule.
Christianity and trade as great threats
According to 1635 edict, trade and Christianity were the major threats of Japan. Christianity was used to cause a diversion in belief and practices thus weakening the Japanese rule. The Christian missionaries opted to use the approach of divide and rule to capture the politics and economy of Japan which would enable them to have ease in the spreading of Christianity in the county (Laver, 2011). Similarly, trade acted as the economic pillar which was one of the key points of control in Japan. The Japanese government of 1635 which was under the rule of Tokugawa Lemitsu felt that an influence on the country’s economic activities might pose a great treats to his rule. In this case, he implemented full Japanese isolation policy.
Reasons for promulgation
The fifth edict of 1639 which was also the final one was made as an impact of the Shimabara Rebellion. It was basically a war between the Japanese rulers and the Christianized Japanese peasants. The edict banned the Portuguese and Spanish ships from using the Japanese waters completely (Laver, 2011). This is because the Japanese rulers thought that the rebellion was highly influenced by the Spanish and Portuguese trade affiliations with the Christianized Japanese thus the promulgation was a precaution for more future rebellions.
Conclusion
The war between foreign Christianity introduction by foreign missionaries and native Buddhist rulers led to a decline in economic level of Japan. This was as a result of the 1635 and 1639 verdicts which isolated Japan preventing her from foreign affiliations. This aspect prevented Japan from enjoying economic upraise due to political differences.
References
Laver M, S. (2011). The Sakoku Edicts and the Politics of Tokugawa Hegemony: New York. Cambria Press Read More
Share:
Tags
Cite this document
(“History J2 Essay Example | Topics and Well Written Essays - 500 words”, n.d.)
Retrieved from https://studentshare.org/history/1633135-history-j2

CHECK THESE SAMPLES OF History J2

...Diplomacy was a foreign policy that was pursued by President William Howard Taft and Secretary of State Philander C. Knox in 1909-1913. Its goal was to create stability and order promoting American Commercial interests and using private capital to further U.S. interests abroad. It was successful in the Caribbean and Central America but failed in Mexico, the Dominican Republic, Nicaragua, and China. It grew out of President Theodore Roosevelt's peaceful intervention in the Dominican Republic by guaranteeing loans made to foreign countries. It is a form of colonizing the finances of struggling countries to ensure that the U.S. is protected from other Powers...
2 Pages(500 words)Essay
sponsored ads
Save Your Time for More Important Things
Let us write or edit the essay on your topic "History J2" with a personal 20% discount.
GRAB THE BEST PAPER

Let us find you another Essay on topic History J2 for FREE!