Comments (0)
Add to wishlistDelete from wishlist
Cite this document
Summary
This paper is being carried out to evaluate and present the beat generation, a group of new cultural and literal movement in America who emerged after World War II. They became more prominent in the 1950s with their new cultural phenomenon…
Download full paperFile format: .doc, available for editing
HIDE THIS PAPERGRAB THE BEST PAPER92.3% of users find it useful 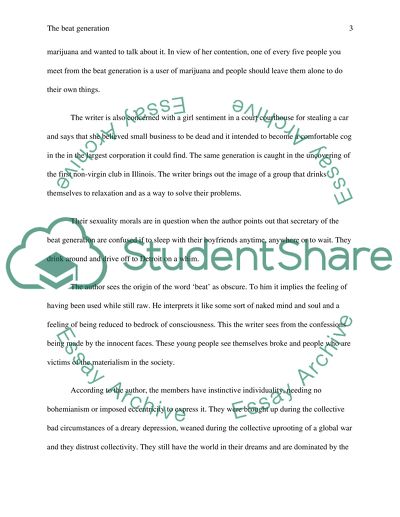 Extract of sample "The Beat Generation"

The beat generation The beat generation The beat generation was a group of new cultural and literal movement in America who emerged after the World War II. They became more prominent in the 1950’s with their new cultural phenomenon. The beat generation was a product of questioning the materialism and the reappraisal of the conventional structures of the society that was evident after the World War II. They railed against the stifling prudery of their parents’ generation.
The adjective ‘beat’
The term ‘beat’ refer to the new culture that came with the beat generation characterized by rejection of received standards, innovation style, experimentation with drugs, alternative sexualities, interest in eastern religion, and rejection of materialism and claims of national consciousness. Kerounac, one of the ‘beat’ writers allows that it was it was street hustler Harbert Huncke who originally used the phrase ‘beat’ in an earlier discussion with him. ‘beat’ could colloquially mean ‘beaten down’ with the African-American community of the period and had developed from the image ‘beat to his socks’. One of the beat writers however altered the image and the meaning to include the connotations upbeat, beatific and a musical association of being ‘on the beat.
The image of The Beat Generation
John Clellon Holmes writes the article ‘This is the Beat Generation’ in New york Times Magazine in November 16, 1952 which gives several sentiments about the generation culture. The first concern is an eighteen-year old California girl who had been picked up for smoking marijuana and wanted to talk about it. In view of her contention, one of every five people you meet from the beat generation is a user of marijuana and people should leave them alone to do their own things.
The writer is also concerned with a girl sentiment in a court courthouse for stealing a car and says that she believed small business to be dead and it intended to become a comfortable cog in the in the largest corporation it could find. The same generation is caught in the uncovering of the first non-virgin club in Illinois. The writer brings out the image of a group that drinks themselves to relaxation and as a way to solve their problems.
Their sexuality morals are in question when the author points out that secretary of the beat generation are confused if to sleep with their boyfriends anytime, anywhere or to wait. They drink around and drive off to Detroit on a whim.
The author sees the origin of the word ‘beat’ as obscure. To him it implies the feeling of having been used while still raw. He interprets it like some sort of naked mind and soul and a feeling of being reduced to bedrock of consciousness. This the writer sees from the confessions being made by the innocent faces. These young people see themselves broke and people who are victims of the materialism in the society.
According to the author, the members have instinctive individuality, needing no bohemianism or imposed eccentricity to express it. They were brought up during the collective bad circumstances of a dreary depression, weaned during the collective uprooting of a global war and they distrust collectivity. They still have the world in their dreams and are dominated by the childhood fantasies; these justify their actions and behaviors. They lusted for freedom during childhood and when they finally during their late youth age they use it to do all sort of imaginable promiscuity, narcotics, black-markets and everything they are able to.
Conclusion
The author brings out the picture of the generation of wild boys and girls who lost their future. They had lust for freedom and when they finally got it they break from the society culture to their own new generation culture. Their culture is constantly at conflict with the society values that the older people are at shock with the horror and bewilderment demands of this generation. This generation did not however live longer after 1960 and it was replaced by new generations.
References
Kerouac, J. (20072005). Beat generation. Oxford: Oneworld Classics.
McNally, D. (1979). Desolate angel: Jack Kerouac, the Beat generation, and America. New York: Random House. Read More
Share:
Tags
Cite this document
(“Essay Example | Topics and Well Written Essays - 500 words - 134”, n.d.)
Essay Example | Topics and Well Written Essays - 500 words - 134. Retrieved from https://studentshare.org/history/1624412-essay

CHECK THESE SAMPLES OF The Beat Generation

The Beat Generation & The Hippie Movement

...English Literature 09 April The Beat Generation & the Hippie Movement When we talk about youth protest movements inAmerica, the hippies and the 1960s come into our heads at once. But the fact is that the sixties witnessed only the second wave of youth revolts and student revolutions that have irrevocably changed the world. However, the first youth upheavals - clumsy, without any clear program, but rough and wild, began in the 1950s and paved the way for the successors. The Beat Generation as a cultural phenomenon clearly manifested itself in the early and mid 1950s. Kerouac, who coined the term, stated that it derives from the word “beatitude” – beat and...
10 Pages(2500 words)Research Paper

...? The of the Beat Generation and their Role in Rebellion and Reflection Research Plan and Preliminary Autobiography Professor: Date: The purpose of this paper is to look at the revolutionary nature of the Beat Generation, particularly the writers from this period in American history, and consider the way in which these writers presented views that were controversial. In addition, the paper will consider the ways that the writers spurred on rebellion within their environment, which had previously been subject to high levels of censorship. My approach to examining this topic will consist of multiple aspects. The first aspect will be to examine literature and research that has been done on this time period to consider the way... in which the...
25 Pages(6250 words)Research Paper

The Beat Generation and the Sixties

...?The Beat Generation and the Sixties The 1950s is often seen as the ‘calm before the storm’, a decade of relative peace and prosperity between the Second World War and the social revolution of the sixties. It was a time of domestic tranquility and social stability where most Americans were focused on raising families in the period of relative prosperity. However, within this calm, the seeds for the cultural and social revolution of the 1960s were sown, in the form of the Beat generation. The Beat generation was post World War II youth, especially writers, who were prominent in the 1950s. The generation and the literature that it developed has been extensively debated by academics and journalists . They were a postwar generation... , and the...
6 Pages(1500 words)Essay

...?Introduction The beat generation has been described as “the most influential cultural and political countermovement of the 20th century America” (Wagner, 5). The possibilities of living outside the ‘normal’ life provided the beat generation writers with their ultimate exotica (Wagner, 10). This ‘other’ life was personified through physical and spiritual expressions like drugs, madness, holiness, music, culture and sexuality. To put the ethos and aesthetics of the beat generation in a single sentence, they “sought knowledge through experience, especially experience from the underside of life” (Wagner, 12). The works of these authors had...
8 Pages(2000 words)Research Paper

...A White Woman's Need to Control Black 'Manhood LeRoi Jones's Dutchman America in the 1960s was an arena of racial and communal conflict. LeRoi Jones explores this volatile situation in his play Dutchman(1964) through the words, actions and interactions of Lula and Clay who, at first glance, might seem to be rather obvious representations of either side of the racial divide. A closer examination of the play, and more specifically, of three of Lula's statements, reveals a larger complexity. It seems apparent that Lula's ill-intentioned but seemingly motiveless targeting of Clay is perhaps the result of a combination of three factors-her hatred of blacks, her antipathy to manhood, and her obsessive desire for control. When... White Woman's...
3 Pages(750 words)Essay

...The Howl and On the Road Beat Literature Analysis 'The Howl' is a poem by Allen Ginsberg while 'On the Road' is a story by Jack Kerouac. These pieces of work have become a part of the canon of 'beat' literature. In order to understand how, this paper will first understand beat literature as well as the beat generation before going on to define the basis on which the literature discussed in this paper can be described as beat literature. For this, the paper will compare both pieces of work in terms of certain elements that form a part of beat literature. To begin with, the term 'beat...
8 Pages(2000 words)Book Report/Review

...Beat Generation In April 1951 Jack Kerouac wrote “On the Road”. This autobiography is written as a tributary of consciousness as well as based on the impulsive road trips of Kerouac along with his friends across mid-century America. It is often thought of as an important work of the postwar Beat Generation that was motivated by jazz, poetry, and drug experiences. Jack Kerouac came up with the phrase “Beat generation” and he was well known both positively as well as negatively as a “beatnik” writer for the majority of his short but productive career. Response to “On the Road” has been fairly miscellaneous; the novel has been called the...
9 Pages(2250 words)Essay

Howl of the Beat Generation

...Howl of the Beat generation The year is 1955 and a fretful and unpublished poet in his late 20s has a feeling that time is running out for him. He wants to be the greatest writer ever to have walked the face of the earth but fate has not been so kind. The poet Gary Snyder predicted that the night would be a “Poetik all bombshell” and sure enough, it was. On that night at the Six Gallery reading in San Francisco, Allen Ginsberg read the poem Howl and it did stir mixed feelings among the public but one thing is for sure Allen had gotten the attention of the people. In the 1950s, the society was confined in following the social dogma without asking questions, many a things were considered taboo and they...
4 Pages(1000 words)Assignment

Let us find you another Essay on topic The Beat Generation for FREE!