Comments (0)
Add to wishlistDelete from wishlist
Cite this document
Summary
The two were among the first ten presidents of the United States after gaining independence. Analyzing these two personalities can help give a…
Download full paperFile format: .doc, available for editing
HIDE THIS PAPERGRAB THE BEST PAPER96.4% of users find it useful 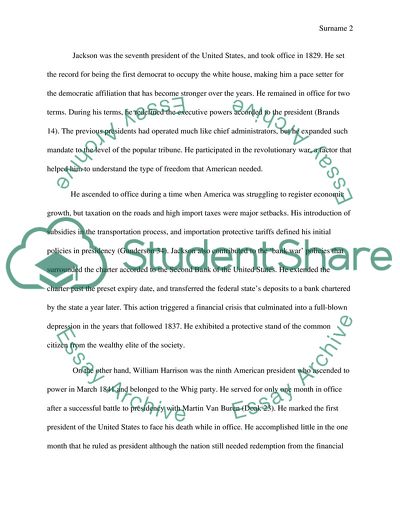 Comparison of Andrew Jackson and William Henry Harrison Andrew Jackson and William Harrison are in the history of the American politics as the seventh and ninth presidents respectively. The two were among the first ten presidents of the United States after gaining independence. Analyzing these two personalities can help give a glimpse of the leadership patterns of the United States presidents. Such information is critical in understanding where the great nation of American is coming from, and relating the leadership priorities then and today. This paper will compare the two personalities.
Andrew Jackson born in 1767, and William Harrison born in 1773, occupied the white house in the same era, 1829-1841. Apparently, the circumstances surrounding the United States during that period were similar. Both of these presidents were born during a time when the United States was under the British colonial rulership. This translates to the fact that both Jackson and Harrison were aware of the struggle towards independence, which was of critical importance to the kind of leadership they exercised. Before rising to the presidential positions, both Jackson and Harrison had held numerous positions in the government that served to prepare them for presidency.
Jackson was the seventh president of the United States, and took office in 1829. He set the record for being the first democrat to occupy the white house, making him a pace setter for the democratic affiliation that has become stronger over the years. He remained in office for two terms. During his terms, he redefined the executive powers accorded to the president (Brands 14). The previous presidents had operated much like chief administrators, but he expanded such mandate to the level of the popular tribune. He participated in the revolutionary war, a factor that helped him to understand the type of freedom that American needed.
He ascended to office during a time when America was struggling to register economic growth, but taxation on the roads and high import taxes were major setbacks. His introduction of subsidies in the transportation process, and importation protective tariffs defined his initial policies in presidency (Gunderson 34). Jackson also contributed to the ‘bank war’ policies that surrounded the charter accorded to the Second Bank of the United States. He extended the charter past the preset expiry date, and transferred the federal state’s deposits to a bank chartered by the state a year later. This action triggered a financial crisis that culminated into a full-blown depression in the years that followed 1837. He exhibited a protective stand of the common citizen from the wealthy elite of the society.
On the other hand, William Harrison was the ninth American president who ascended to power in March 1841 and belonged to the Whig party. He served for only one month in office after a successful battle to presidency with Martin Van Buren (Doak 23). He marked the first president of the United States to face his death while in office. He accomplished little in the one month that he ruled as president although the nation still needed redemption from the financial problems created by Jackson. However, he succumbed to a cold in April the same year (Gaines 40).
Evidently, the two presidents highlighted above were born when America was still under the British rule. They had witnessed the revolutionary war that earned America freedom. The first democrat president Jackson had eight years in office that he used to expand the executive powers to a new level. On the other hand, William Harrison had no time to build himself a legacy because he succumbed into a cold that he had developed in his inauguration period.
Work Cited
Brands, H W. Andrew Jackson: His Life and Times. New York: Anchor Books, 2006. Print.
Doak, Robin S. William Henry Harrison. Minneapolis: Compass Point Books, 2004. Print.
Gaines, Ann. William Henry Harrison: Our Ninth President. Mankato, Minn: Childs World, 2009. Print.
Gunderson, Megan M. Andrew Jackson. Edina, Minn: ABDO, 2009. Print. Read More
Share:
Tags
Cite this document
(“Andrew jacks and William Henry Harrison Essay Example | Topics and Well Written Essays - 500 words”, n.d.)
Retrieved from https://studentshare.org/history/1623747-andrew-jacks-and-william-henry-harrison

CHECK THESE SAMPLES OF Andrew jacks and William Henry Harrison

...﻿Harrison Bergeron The present epoch witnesses disparities in terms of economies, culture and profession but plots (year, 2081) akin to Harrison Bergeron emerged to portray equality amongst individuals corresponding to the nature on its inhabitants and equality imposition by law. An attempt to display equality in terms o f smartness, looks, talent, strength and pace is accredited to the 211th, 212th and 213th Amendments to the Constitution. In the plot correspondence was accomplished through handicap equipments. These devices or equipments were located on the persons to diminish their prominent capabilities. For instance, personnel amid prominent powers were presented through the additional heaviness to...
1 Pages(250 words)Book Report/Review

...﻿Andrew Jackson and Henry Clay were both well-known politicians in the course of United States history, often because of their differing views on politics and policy. Both had strong wills and even stronger ideals about the way that the country should be run, advocating different paths for the growth and development of the country. Both men had the power to curry favor with various politicians. Both came into politics during the 1820s, an era when the United States was growing rapidly, voters had increased, and the country was trying to find out and come into its own as a country, still leaving behind the stigma of once being a colony of Great Britain while establishing itself as a world power (Davidson,...
4 Pages(1000 words)Essay

A Dialogue between Andrew Jackson and Henry Clay

Before embarking upon the dialogue, it would be advisable to present a brief introduction of both the personalities under discussion. Andrew Jackson serves as one of the most influential statesmen the USA has ever produced. By dint of his talent, wisdom and foresight, he achieved the height of triumphs against his political opponents and was elected to be the seventh and eighth President of America. Jackson adopted courageous strategic policies and combated with several internal and external challenges in a successful manner. However, his economic policies are aptly criticized by the opponents to be inadequate ones. Similarly, Henry Clay is also regarded to be a considerable personality in the early history of America, who served...
6 Pages(1500 words)Research Paper

...? Harrison Company Case Rubric Question # 2 – Ethical and Socially Responsible Decisions It is important to highlight that the company faces multiplesocial and ethical issues. The issues are being identified and discussed in the table below: Issue Description about the issue Association in terms of outsourcing with a Honduran company that engages unethical manufacturing practices in its units The issue of unethical manufacturing practices engaged by a Honduran company came into focus when one of the ex employees of the company spread the word in the media that the company share a buyer relationship with the Honduran company that follows slave like working conditions for its employees. The ex employee brought the...
20 Pages(5000 words)Case Study

...Introduction Men should be treated as equals. But are they really equal People are different, but are they all equal And if I say people are not equal, does this mean I find other people to be inferior, the same way Hitler found the Jews According to William A. Henry III, in the effort to promote the egalitarian doctrine - that all people should be treated as equals, we forget "the simple fact that some people are better than others, smarter, harder working, more learned, more productive, harder to replace. Some ideas are better than others, some values more enduring, some works of art more universal. Some cultures, though we dare not say it, are more accomplished than others and therefore more worthy...
4 Pages(1000 words)Essay

...ANDREW JACKSON AND WILLIAM SHERMAN It was way back in 1829, when the seventh president of the United s arrived to Washington in a train and leftback in the same manner after a period of two years that consisted of successive periods of turbulent presidency. This period helped the United States progress along the lines of prosperity and resulted in the growth of the market economy. Another person, whose control and charisma was as dominant and evident as that commanded by Jackson was William Sherman, who embraced the challenge of war without batting an eyelid. His strategy of pursuing a scorched earth policy was relentless in cruising though the grip of the confederacy. Despite their...
2 Pages(500 words)Essay

...Henry George and Andrew Carnegie Henry George was born in Philadelphia on September 2, 1839. He is known to be a very famous political economist whose theories are still well accepted all over the world. He started as a common man but later turned out to successfully write on his theories to help people understand his views on wealth and equality (Henry & Wenzer XIII). Andrew Carnegie was born on November 25, 1835 in Dunfermline, Scotland. Carnegie started from the scratch as a worker to reach a very high position of owning a steel mill in the United States of America. He personally had his own theories regarding wealth and equality too which he later on...
6 Pages(1500 words)Essay

... there are views that he would be disappointed with, lets say for example aspects such as homosexuality and secularization would not please the statesman. Works Cited Adams, John. Diary and Autobiography of John Adams, edited by Lyman Butterfied. Cambridge. 1961 Library of Congress. Journals of Continental Congress, Vol 5, pp. 506-514. 1774-1789. Smith, Howard, William. Benjamin Harrison and the American Revolution. Edward M. Riley, editor. Williamsburg, Va: Virginia Independence Bicentennial Commission, 1978.... ﻿Viewpoints of Benjamin Harrison Born on April 5, 1726, Benjamin Harrison V rose the political ranks to be an icon in the struggle for American dawn characterized by the independence from the...
3 Pages(750 words)Research Paper
sponsored ads
Save Your Time for More Important Things
Let us write or edit the essay on your topic "Andrew jacks and William Henry Harrison" with a personal 20% discount.
GRAB THE BEST PAPER

Let us find you another Essay on topic Andrew jacks and William Henry Harrison for FREE!