Comments (0)
Add to wishlistDelete from wishlist
Cite this document
Summary
In the book “Desert exile, the uprooting of a Japanese-American family”, Yoshiko Uchida narrates his experiences as a Japanese-American before the war, as well as during the war. The author gives an account of what took place in his life before the war started and the…
Download full paperFile format: .doc, available for editing
HIDE THIS PAPERGRAB THE BEST PAPER93.6% of users find it useful 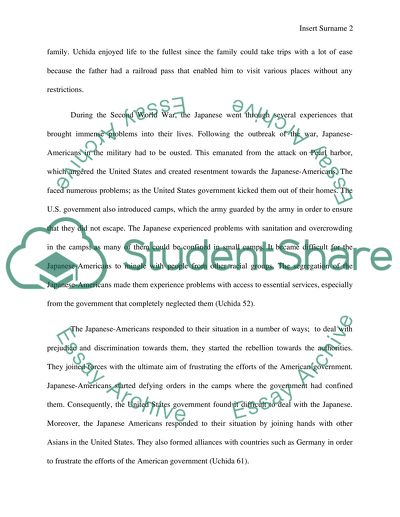 CHECK THESE SAMPLES OF Desert Exile

Personal statement on going to graduate school for speech pathology

Apples from the desert

...Apples from the Desert What are some perspectives about Israeli society that the seems to highlight? That is, what are some things with which you are perhaps not so well acquainted, but as a reader may make you curious about the society and culture of Israel as presented by Savyon Liebrecht? Savyon Liebrecht highlighted experiences regarding marriage, divorce, mother – daughter relationships, daughter of concentration camp survivors, among others. In “A Married Woman”, the author presented the irony of a Hannah Rabinsky, woman married to Moshe, a man known as a womanizer, an alcoholic, and a gambler, and later stressed that the “marriage wasn’t really a marriage”. Due to her Pnina’s (daughter’s) prodding and her love...
2 Pages(500 words)Essay

...Life in an Internment Camp through the Eyes of a Victim: Desert Exile by Yoshiko Uchida Reading “Desert Exile”, the autobiographical book by Yoshiko Uchida for the first time would shock any American. The author lays bare the unpalatable truth of the ‘internment camps’ in which the Japanese Americans were forced to live in, after Pearl Harbor. Writing in a simple and lucid style, the author describes first hand, the experiences of the Japanese Americans living in the United States before and during World War II. Being a Japanese American herself, born in the United States to émigré Japanese parents, Yoshiko was also subjected to the unsettling experience of the...
4 Pages(1000 words)Essay

Book review on when the empire was divine

...beneath. This is well illustrated by the use of short sentences with deep significance. Bibliography Girdner, Audrie and Loftis, Anne. The Great Betrayal: The Evacuation of the Japanese-Americans During World War II. The Macmilan Company.1969, 326 – 510. Levine, Ellen. A Fence Away From Freedom: Japanese Americans and World War II. Putnam Juvenile. 1995, 101-215. Munley, Lisa. Books on The Brain. Book Review. 2009. Otsika, Julie. When The Emperor Was Divine. New York: Anchor Books. 2003, 1-160. Taylor, Sandra. Jewel of the Desert: Japanese American Internment at Topaz. University of California Press. 1993, 122-305. Uchida, Yoshiko. Desert Exile: The Uprooting of a Japanese-American...
6 Pages(1500 words)Book Report/Review

...Operation Desert Storm Introduction Operation Desert Storm is part of the Gulf War, and its occurrence is between January 17, 1991 – February 28, 1991. The whole war was by combat forces, and Operation Desert Storm happened in the combat phase of the Gulf War. The war had a total of thirty-four nations led by the United States of America against Iraq. The purpose of the war was due to Iraq’s invasion of Kuwait. The war was the first major foreign crisis for America since the cold war. The essay will focus on why US Army was unprepared for the war, the root factors that affect US Military, and the role of Non-Commissioned Officer in preparing Soldiers to conduct combat...
6 Pages(1500 words)Research Paper

...Environmental Studies Environmental Studies The Desert rat-kangaroo (Caloprymnus campestris) Discovered in the 1840s and previously common in the desert areas of Central Australia, the desert rat-kangaroo was officially listed as extinct under the 1999 Act of Environmental Protection and Biodiversity (Fisher & Blomberg, 2010). Apart from females with young offspring that lived in nests, it was typically solitary and its native habitat was arid land with sparse cover although it was also found in Australia’s loamy flats and clay pans. However, its extinction is still marred in ambiguity mainly because there were reports of its rediscovery, albeit short-lived, after its 90-year...
4 Pages(1000 words)Essay
sponsored ads
Save Your Time for More Important Things
Let us write or edit the essay on your topic "Desert Exile" with a personal 20% discount.
GRAB THE BEST PAPER

Let us find you another Essay on topic Desert Exile for FREE!