Comments (0)
Add to wishlistDelete from wishlist
Cite this document
Summary
He is a journalist from England. He is committed to democratic socialism, and against totalitarianism. He is known for his wit, humor and satire. The entire humankind is his…
Download full paperFile format: .doc, available for editing
HIDE THIS PAPERGRAB THE BEST PAPER92.9% of users find it useful 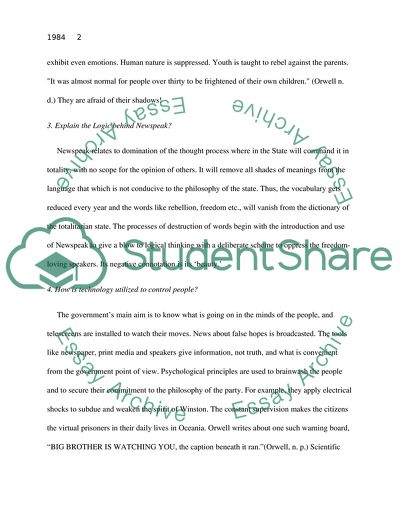 Essay, History and Political Science Topic: 1984George Orwell
1. What was the purpose behind the writing of the novel? Explain who the author was and who the audience is.
The author of the novel 1984 is Eric Arthur Blair (1903-1950) known by his pen name George Orwell. He is a journalist from England. He is committed to democratic socialism, and against totalitarianism. He is known for his wit, humor and satire. The entire humankind is his audience and the purpose behind this novel is to make the people aware what a tragedy it is to live under totalitarian regimes.
2. How does the society I this dystopian world of Oceania work?
The dystopian world of Oceania is a terror-ridden society, where "War is Peace; Freedom is Slavery; Ignorance is Strength" (Orwell n.d.). Unrealistic and negative messages are its hallmarks. All privacy of the people is done away with. An individual cannot express, he is part of the collective conformity. Each citizen is required to be a loyal follower of the government. Physical and emotional tortures are the accepted procedures to achieve the reformation goals. The supreme leader eliminates the fundamental rights and freedom of expression of the citizens. They are like the dumb, driven cattle. Since each movement is monitored, people are afraid to exhibit even emotions. Human nature is suppressed. Youth is taught to rebel against the parents. "It was almost normal for people over thirty to be frightened of their own children." (Orwell n. d.) They are afraid of their shadows!
3. Explain the Logic behind Newspeak?
Newspeak relates to domination of the thought process where in the State will command it in totality, with no scope for the opinion of others. It will remove all shades of meanings from the language that which is not conducive to the philosophy of the state. Thus, the vocabulary gets reduced every year and the words like rebellion, freedom etc., will vanish from the dictionary of the totalitarian state. The processes of destruction of words begin with the introduction and use of Newspeak to give a blow to logical thinking with a deliberate scheme to oppress the freedom-loving speakers. Its negative connotation is its ‘beauty.’
4. How is technology utilized to control people?
The government’s main aim is to know what is going on in the minds of the people, and telescreens are installed to watch their moves. News about false hopes is broadcasted. The tools like newspaper, print media and speakers give information, not truth, and what is convenient from the government point of view. Psychological principles are used to brainwash the people and to secure their commitment to the philosophy of the party. For example, they apply electrical shocks to subdue and weaken the spirit of Winston. The constant supervision makes the citizens the virtual prisoners in their daily lives in Oceania. Orwell writes about one such warning board, “BIG BROTHER IS WATCHING YOU, the caption beneath it ran.”(Orwell, n. p.) Scientific research and progress will only fulfill the goals set out by the party. Artificial insemination and methods for psychological manipulation are the tools to exercise control over the citizens. Technological tools create a frightening environment for the citizens. History is distorted and re-written to suit the needs of the party.
5. Explain the relationship between OBrien and Winston
O’Brien wants to implant the communist party philosophy of dictatorship in the mind of Winston who is the member of the outer party. Winston loves freedom, a trait of the proletariat, and he questions and argues. O’Brien perceives this as the threat to the party and thinks that it is his duty to save the party to which he is deeply committed. O’Brien is a total conformist, will not like any deviation from the party line, he is not personally against Winston, but is duty-bound to carry out the directives of the party. The theme of government mind control is revealed through the antagonist O’Brien, who is a member of the surveillance on Winston Smith by the thought police. Apparently they look like friends, and Orwell writes about his personality, “But at any rate he had the appearance of being a person that you could talk to if somehow you could cheat the telescreen and get him alone.”(Orwell n. p.) but O’Brien is committed to party philosophy and on that consideration, the beauty of the friendship is confronted to duty towards the communist philosophy.

CHECK THESE SAMPLES OF 1984 George Orwell

1984 by George Orwell and Big Brother

...? Order 528459 Topic: 1984 by George Orwell and Big Brother The wise saying goes—you can fool some for all time, and all for some time, but not allfor all time! If someone had tendered this advice to George Orwell’s Big Brother, things would have been smoothened for him to lead the Communist Philosophy to success. Kellner writes, “The novel opens with evocations, frequently repeated that "BIG BROTHER IS WATCHING YOU." Then it quickly plunges the reader into an oppressive environment where omnipresent television sets not only incessantly broadcast government propaganda but actually serve as instruments of surveillance.” The subtle aspect of Communism as perceived by George Orwell is doublespeak. The Michal Buchowski at el. writes... ,...
3 Pages(750 words)Research Paper

...Totalitarianism:"1984" by George Orwell and "Ella Minnow Pea" by Mark Dunn Introduction Totalitarianism is a political arrangement whereby the state or a single political party holds absolute control and authority over its society. The objective of such a system is to control every aspects of a group of citizens’ public plus private life. The “1984” story by George Orwell is based on a "future" society whereby individualism is purged by totalitarianism, and propaganda is massively applied for a few people to encompass power over the masses. Furthermore, perpetual war is incessantly waged by the elite so as to preserve their perception of...
6 Pages(1500 words)Essay

...Essay, English Revision set on 05-02 15:12:07 3) Connectively, proofread the paper in full for format, grammar, and syntax so that the paper may successfully pass our next QAD check With these in mind, please, make necessary alterations in a timely manner. QAD Topic: 1984 By: George Orwell Themes Manipulation The main theme of manipulation runs through all other subsidiary themes in the novel 1884, like repression, loyalty, rebellion, psychological manipulation, memory and the past etc. Even the name, George Orwell is manipulated and his real name is Eric Arthur Blair (1903-1950)! A reader is the witness, as to how the theme of manipulation is...
5 Pages(1250 words)Essay

...George Orwell George Orwell is a famous English novelist and essay who was a strong critic. Born as Eric Arthur Blair in Motihari, India on 25th June 1903, Orwell rose into fame through penning novels, Animal Farm in 1945 and Nineteen Eighty-Four in 1949.Most of his writings focused on the politics of those days. His early life was not very rosy but he overcame the challenges to emerge one of the greatest writers I the world today. He had a wife and together they adopted a child (John and Kathleen 3). Orwell’s family lived in India during his early days. His father was a civil servant, who worked in India, a British empire by then, where...
5 Pages(1250 words)Essay

... 1984 In his well-known book 1984, George Orwell predicted some technological and societal developments that would happen in future. Although many did not believe what he predicted at the time, most of his predictions have indeed come to pass. This essay examines some of the predictions that have come true and those yet to be fulfilled. Orwell foresaw how technology could be used by the Party as ‘Big Brother’ in monitoring the movements and actions of people. Specifically, one of such devices was the ‘telescreen’, which ‘received and transmitted simultaneously’ (Orwell, 5). He predicted that this device could pick out the sounds people made and monitor the movements of a person who is within its ‘field of vision’ (Orwell, 5). More... ...
3 Pages(750 words)Essay

...﻿1984 by George Orwell “1984” by George Orwell, is a symbolic satire of the communist ideals being preached in the 19th century. George Orwell has undertaken a similar satirical approach with in the novel Animal Farm, which described the communist revolution which happened in Russia where there were implicit references or allusions to the main players in the Communist reform .For example in the Animal Farm the reference to Manor farm depicted Russia and the Title of the Animal Farm implicitly referred to Russia. In his book 1984 where he takes his criticism a step further is a similar...
3 Pages(750 words)Essay

...﻿1984 by George Orwell The novel 1984 was published in 1949 and became one of the most popular literary works in 2oth century. This novel belongs to utopian literary works portraying totalitarian government and problems caused by strict government control and strict regime. Critics admit that Orwell's book is one of the central defining texts of the genre of dystopian fiction, dealing in important ways with almost all of the central motifs associated with the genre (Argyros 109). For example, in the Oceania of Orwell's book certain mechanical applications of technology lend themselves directly to political oppression, even while science...
12 Pages(3000 words)Book Report/Review

...1984 by George Orwell 1984 is a book that explains events that were bound to happen in the future. The book explains a situation whereby power is split into three equal groups. These groups include Eastasia, Eurasia and Oceania. The main character in this book is Winston Smith. He is a middle-aged man who has an unhealthy character. The Party demonstrates the totalitarianism that has taken place after the 20th century. In this case, people are subjected to 24 hour surveillance. Moreover, people’s thoughts are controlled to ensure that they live pure lives as required by the oligarchical system that has been set in place (Askeda, 1). In this case, the system is...
4 Pages(1000 words)Essay

...Module Module ID: 1984 The present paper aims to explore whether there exists any association between the initial part of a work with its subsequent portions by concentrating upon the novel 1984 (2004) created by George Orwell. One of the most significant objectives behind discovering the relationship between the first part and further developments includes whether or not the introductory passages should represent the theme of a work. Since introductory portion of the works provide an imperative clue to the further progress to be made in them, the readers are prepared to analyse and assess the work by sticking to the details drawn out in the initial passages; the same...
2 Pages(500 words)Essay

... Introduction The life of Brian Arthur Blair, who was and is popularly known as George Orwell, can only be termed as ordinary. Nothing out of ordinary jumps out when you read what is left of him to read about. He was born of, a normal British imperial family, raised by a mother who cared for him a little too much, enrolled in normal schools and followed basically all the systems that were there to be followed. His life starts changing when he grows up and is posted as an assistant superintendent in Burma. Henceforth, he leads an ordinary life of “interest” until he met his untimely death in the mid-20th century. Life and Works of George OrwellGeorge was born Brian Arthur Blair, on June 25 1903, in Bengal India, a protectorate... humanity,...
4 Pages(1000 words)Essay
sponsored ads
Save Your Time for More Important Things
Let us write or edit the essay on your topic "1984 George Orwell" with a personal 20% discount.
GRAB THE BEST PAPER

Let us find you another Essay on topic 1984 George Orwell for FREE!