Comments (0)
Add to wishlistDelete from wishlist
Cite this document
Summary
A federal system of government is government system that divides government’s power between the federal (national) government and state and local governments (Grant 256). For example, the U.S. established a federal system referred to as federalism. In federalism system of…
Download full paperFile format: .doc, available for editing
HIDE THIS PAPERGRAB THE BEST PAPER93.8% of users find it useful 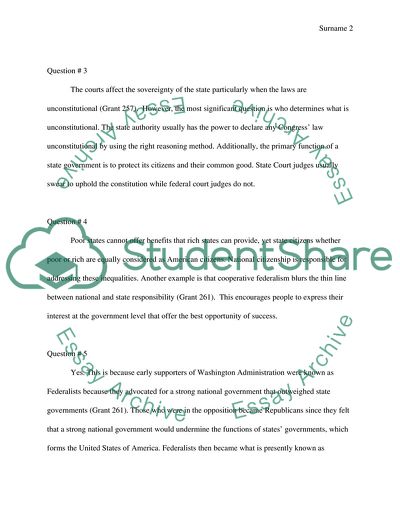 Assignment Part A Question A federal system of government is government system that divides government’s power between the federal (national) government and state and local governments (Grant 256). For example, the U.S. established a federal system referred to as federalism. In federalism system of government, each level of government has sovereignty in some regions while share power in other regions. For instance, only the federal government can declare war while both federal and state governments can tax (Grant 256).
Question # 2
Cooperative federalism is a constitutional and a political concept that was created in the Twentieth Century, and it stresses on the decentralization of government powers, but not equal sharing of government responsibilities between local, state and federal institution and agencies (Grant 257). This implies that both federal and state governments are concurrently independent and interdependent with a common region of financial resources and functions. Therefore, it is difficult for a single government to accumulate all the powers.
Question # 3
The courts affect the sovereignty of the state particularly when the laws are unconstitutional (Grant 257). However, the most significant question is who determines what is unconstitutional. The state authority usually has the power to declare any Congress’ law unconstitutional by using the right reasoning method. Additionally, the primary function of a state government is to protect its citizens and their common good. State Court judges usually swear to uphold the constitution while federal court judges do not.
Question # 4
Poor states cannot offer benefits that rich states can provide, yet state citizens whether poor or rich are equally considered as American citizens. National citizenship is responsible for addressing these inequalities. Another example is that cooperative federalism blurs the thin line between national and state responsibility (Grant 261). This encourages people to express their interest at the government level that offer the best opportunity of success.
Question # 5
Yes. This is because early supporters of Washington Administration were known as Federalists because they advocated for a strong national government that outweighed state governments (Grant 261). Those who were in the opposition became Republicans since they felt that a strong national government would undermine the functions of states’ governments, which forms the United States of America. Federalists then became what is presently known as democrats. Even in the current U.S. government, the democrats are in the government while republicans are the opposition (Grant 257).
Part B
Question # 1
In this quotes, the President was telling American citizens about the significance of state of the union. He is calling upon all American citizens to come and work together towards achieving the American dream. For example, when it comes to security matters, all citizens are expected to make an effort and participate in maintaining national security since it is not an individual’s affair.
Question # 2
In this speech, the President was trying to indicate that the constitution sometimes gives him power to act above the Congress decisions. According to the American Constitution, the President has significant discretion in how the Congress pass laws, implement laws or express will. Therefore, the president can at times reject a law passed by Congress or partially implement the law. He also has the power to increase or decrease expenditure of money approved by Congress.
Question # 3
The President was referring to the U.S. Constitution, Article 2, section 3 that says, “The president shall from time to time give to the Congress Information of the State of the Union, and recommend to their considerations such measures as he shall judge necessary and expedient’’ (The Guardian)). Therefore, President Obama is right when he says that he is mandated to report the state of union and improve it, and all American citizens are required to participate in the implementation process.
Question # 4
In his speech, the President demonstrated how much a state of the union could bolt up policy territory from providing clean energy to the mortgage market to infrastructure repair to pre-school education. In relation to pre-school education, most states have noted that the earlier a child begins his or her schooling, the better they get down the road. I propose that allocating more dollars in high-quality early education will significantly save the nation from more expenses by reducing child pregnancy, booting education and reducing violent crime among the youths. Therefore, all the kids should be given this excellent opportunity to better their future lives.
Question # 5
Rubio’s response to the President’s state of the union speech evoked nothing significant in the current American society, but the past. He is not willing to defend the impacts of the Republican Party’s policies, and even change these policies. He thus poses as federalist who strongly advocated for a strong national government that overpowered state governments. In other words, he is a supporter of the olden Washington Administration.
Works Cited
Grant A. R. The American Political Process. New York: Routledge, 2004. Print Read More
Share:
Tags
Cite this document
(“Assignment Example | Topics and Well Written Essays - 500 words - 74”, n.d.)
Assignment Example | Topics and Well Written Essays - 500 words - 74. Retrieved from https://studentshare.org/history/1615387-assignment