Comments (0)
Add to wishlistDelete from wishlist
Cite this document
Summary
In the paper “Cultural Makeup of Early Civilizations,” the author analyzes a number of forces that played a part in the cultural composition of early societies. Several forces had much more influence on cultures than others which influenced cultures to a minimal extent…
Download full paperFile format: .doc, available for editing
HIDE THIS PAPERGRAB THE BEST PAPER92.4% of users find it useful 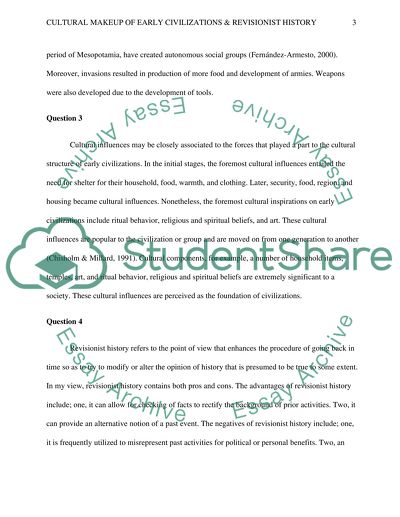 ﻿
Cultural Makeup of Early Civilizations
Question 1
There are a number of forces that played a part to the cultural composition of early societies. Several forces had much more influence to cultures than others which influenced cultures to a minimal extent. There are a number of forces that played a part in structuring early civilization. They include economics, the artifacts held by the communities, forms of occupation, religion, and literacy. In addition, the early civilizations focused on developing new tools to enhance their existence and survival. Worship and forms of religion helped in shaping a number of early civilizations. Religion and worship provided a means by which early civilizations could give explanations of mysterious issues in their existence (Chisholm & Millard, 1991). These forces played a part because a unit’s culture is highlighted as a demonstration that is present in religion, art, and customs.
Question 2
Several social issues occurred as a result of the cultural makeup. They include invasions, conquests, and wars. A civilization’s religious and spiritual convictions, forms of occupation, artifacts, literacy, and political activities, may cause those social issues. In addition, social concerns also entailed the economic difficulties that were a threat to the early civilizations. Moreover, there was a development of ethnocentrism. Ethnocentrism arose because of the emergence of social class. Ethnocentrism may include small units of people between civilizations and societies, and within a community. For instance, a number of groups in the history of Iraq, going back to the period of Mesopotamia, have created autonomous social groups (Fernández-Armesto, 2000). Moreover, invasions resulted in production of more food and development of armies. Weapons were also developed due to the development of tools.
Question 3
Cultural influences may be closely associated to the forces that played a part to the cultural structure of early civilizations. In the initial stages, the foremost cultural influences entailed the need for shelter for their household, food, warmth, and clothing. Later, security, food, region, and housing became cultural influences. Nonetheless, the foremost cultural inspirations on early civilizations include ritual behavior, religious and spiritual beliefs, and art. These cultural influences are popular to the civilization or group and are moved on from one generation to another (Chisholm & Millard, 1991). Cultural components, for example, a number of household items, temples, art, and ritual behavior, religious and spiritual beliefs are extremely significant to a society. These cultural influences are perceived as the foundation of civilizations.
Question 4
Revisionist history refers to the point of view that enhances the procedure of going back in time so as to try to modify or alter the opinion of history that is presumed to be true to some extent. In my view, revisionist history contains both pros and cons. The advantages of revisionist history include; one, it can allow for checking of facts to rectify the background of prior activities. Two, it can provide an alternative notion of a past event. The negatives of revisionist history include; one, it is frequently utilized to misrepresent past activities for political or personal benefits. Two, an alternative view derived from revisionist history may cause inaccuracies and miscalculations (Sayre, 2013).
References
Chisholm, J., & Millard, A. (1991). Early civilization. New York: Usborne.
Fernández-Armesto, F. (2000). Civilizations. New York: Macmillan.
Sayre, H. M. (2013). Discovering the humanities (2nd ed.). New Jersey: Pearson Education, Incorporation.
Read More
Share:
Tags
Cite this document
(“Cultural Makeup of Early Civilizations Assignment”, n.d.)
Cultural Makeup of Early Civilizations Assignment. Retrieved from https://studentshare.org/history/1615113-cultural-makeup-of-early-civilizations-revisionist-history

CHECK THESE SAMPLES OF Cultural Makeup of Early Civilizations

...interference show us that the people of the early Mesopotamian region reflected deeply on the matters of social order, culture, and politics. The heroes on their travels met various challenges with great courage and in solving many problems; they demonstrated a confidence in human endeavour that exemplifies their entrepreneurial home culture. Furthermore, we have examples of social stratification in ancient civilizations even more than today's ones. Our ancient societies have a social hierarchy based on the economic and political powers of an individual. Of the four, India had the most rigid type of social stratification which persisted even today, even if with less...
15 Pages(3750 words)Essay

...that contributed to the cultural makeup of early civilizations and that of today. Human beings learned to subdue nature, invented agriculture that allowed production of a food surplus, manufactured new types of tools, and domesticated animals (The University of North Carolina at Pembroke, 2006). They eventually become skilled in architecture, developed a penchant for music, expressed their thoughts and emotions through arts, and appreciated the “divine existence”. Poiycratis G.S., in an opening lecture at the Athens MBC Meeting, discussed several main cultural influences on early civilizations. It was mentioned that the...
3 Pages(750 words)Essay

The Similarities and Differences of Two Early Civilizations

...), Mesopotamia was located between Tigris and Euphrates rivers in the Persian Gulf and it is the oldest recorded civilization. The rivers provided water for irrigation and fertile silt, which formed rich agricultural land for the Mesopotamians. These favorable conditions amidst the harsh desert climate in the region attracted the settlement of Sumerians. Sumerians are credited for the creation of the earliest civilization in Mesopotamia and for introducing city-states, education, and better technology in addition to foundation of organized institutions. Though city-states shared the same culture, they were autonomous. Each city-state had its own government that was led by its own leaders...
3 Pages(750 words)Essay

...classes have developed here, with the only difference being that they are not called classes? Now there are the same parasites who live at the expense of others.” (Davis) Women: Critical to African Development This document states the obstacles to women’s participation in economic development to be the planning of development around male conceptualization of life which fails to take into account the activities of women and the designing of the development plans around an urban outlook which does not factor in the dynamics of rural life. Ambassador Tau views the sources of sexual inequality to be largely a result of the male dominated culture in Africa. This is evident throughout the article when she draws parallelisms...
3 Pages(750 words)Assignment

... 09 July 2007 History Geographical location and natural environment had a great impact on civilizations and their social, economic, political and cultural development. Environment influenced outlooks, philosophies and early religious traditions of the civilizations determining their attitude towards the world around and other people. Researchers state that severe climate resulted in a strict philosophical tradition reflecting ideas of sufferings and endurance while mild and warm climate caused more liberal philosophical dogmas and norms based on the idea of contemplation and self-observation. The example of China and Mesopotamia vividly portray that geographical location and climate in different parts of the world 'caused' similar... ,...
3 Pages(750 words)Essay

...Christians and Muslims views of the first crusade Christians and Muslims views in the first crusade The first crusade illustrated the religious favor that engulfed Christendom, the newly construed idea of holy war and the laws of an active papacy, which was misused by the Church in its providence of indulgence. The crusades were conducted as penitential acts of powerful persuasion and devotion for the atonement of all the sins committed by the people. The idea of the crusades interlinked various ideologies both those preached in the church and inherit within individuals. The crusades began when the Seljuk Turks emerged victorious in their war with the Byzantine army and prevented Christians from accessing Jerusalem. The first... and Muslims ...
5 Pages(1250 words)Essay

...30 November Cultural Makeup of China In the current constantly advancing business world, the cultural characteristics of key societies such as those of China have recently become a subject of great concern. To be precise, business stakeholders have been fighting tooth and nail to comprehend China’s cultural makeup. This is because the country’s large cultural values have laid the building blocks to most of the day-to-day global business operations. That is, most businesspersons consider comprehension of the Chinese culture as a key requirement in successful execution of the global business operations particularly when...
4 Pages(1000 words)Essay

... Mindwalk Q1: The film Mindwalk is a philosophical movie presented in dialogue form where characters of different professions meet. These people include A). Jack Edwards, a destitute politician B). Thomas Harriman, a poet/free-spirited writer and C). Sonia Hoffman, a physicist. Q2: The film Mindwalk displays a holistic vs. atomistic approaches of viewing the world. In the film, Hoffman the scientist who secludes herself from the society, talks to her companions (Edwards and Harriman) about her perception of the world. She views the world in a holistic way and tells her friends that the world is unified. Hoffman presents a disillusioned figure as she talks standoff and rubble of years of industrialization and governments. She... Mindwalk Q1:...
1 Pages(250 words)Assignment
sponsored ads
Save Your Time for More Important Things
Let us write or edit the assignment on your topic "Cultural Makeup of Early Civilizations" with a personal 20% discount.
GRAB THE BEST PAPER

Let us find you another Assignment on topic Cultural Makeup of Early Civilizations for FREE!