The End of the British Empire - Research Proposal Example

Comments (0)
Add to wishlistDelete from wishlist
Cite this document
Summary
I have always been fascinated with Great Britain and am intrigued to learn just how much influence they garnered in the world at one time. In fact, it was…
Download full paperFile format: .doc, available for editing
HIDE THIS PAPERGRAB THE BEST PAPER94.2% of users find it useful 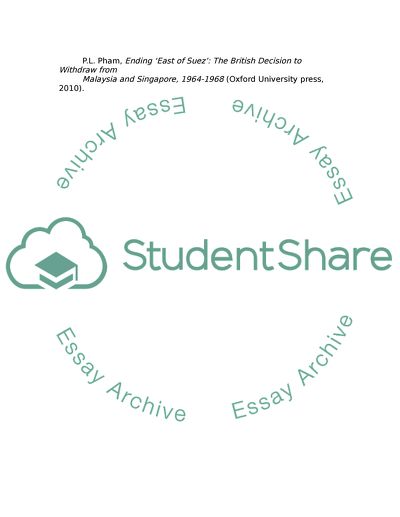 Extract of sample "The End of the British Empire"

A Research Essay Proposal for HIST 101: “The End of the British Empire” While there are numerous interesting topics to choose from for this essay, Ihave chosen to study the end of British Empire. I have always been fascinated with Great Britain and am intrigued to learn just how much influence they garnered in the world at one time. In fact, it was not that long ago, as I understand it, that the British had overseas possessions and trading posts scattered throughout the globe. It will be interesting to discover, then, what led to the end of the Empire, as we know it. To do this, I will need to first look at the history of the British Empire, the state of the world at the time it began to decline, and what exactly occurred to cause the United Kingdom to relinquish most of its overseas possessions.
In anticipation of writing this paper, I have located a number of secondary sources that are certainly worthy of study when considering this topic. The sources that I uncovered are a combination of historical overviews, coupled with a synopsis of opinions from scholars that have, themselves, attempted to better understand what led to the demise of the British Empire. All of these resources are available electronically from the library. My preliminary list of sources include:
Bernard Porter, “Cutting the British Empire Down to Size,” History Today
62 (2012), p. 22
G. Glazebrook, “British Empire Migration,” Pacific Affairs 7 (1934), pp. 437 –
439.
H.V. Bowen, “The British Empire,” History, 79 (1994), pp. 263-266.
Ronald Hyam, “Understanding the British Empire,” History Today 46 (2011),
pp. 135-136.
Simon J. Potter, “The British Empire,” Historian 81 (2004), p. 32.
In addition to these sources, I have located the following two sources that I will need to borrow via an interlibrary loan. Those sources are:
Nicholas Canny, The Origins of Empire, The Oxford History of the British
Volume 1 (Oxford University Press, 1998).
P.L. Pham, Ending ‘East of Suez’: The British Decision to Withdraw from
Malaysia and Singapore, 1964-1968 (Oxford University press, 2010). Read More
Share:
Tags
Cite this document
(“The End of the British Empire Research Proposal Example | Topics and Well Written Essays - 250 words”, n.d.)
The End of the British Empire Research Proposal Example | Topics and Well Written Essays - 250 words. Retrieved from https://studentshare.org/history/1614868-the-end-of-the-british-empire

CHECK THESE SAMPLES OF The End of the British Empire

World War One marked the beginning of the end of the British Empire. Is it so

Art and the British Empire

...﻿Art and the British Empire Visual arts refer to forms created in a way that they can be viewed. They include drawings, portraits, sculptures, printmaking, designs, photographs, films, videos, e\architecture and others (Barringer, Quilley & Fordham 2007). Today, visual arts include fine arts, decorative arts and crafts. In Britain, art and crafts movement started in 20th century and before this movement, the term artist was designated to a person working as a fine artist such as painters, sculptors and film makers (Loring & Jennie 2011). With the introduction of art schools, there was a need to render art a dynamic phenomenon and, therefore, art has been defined in an amorphous way because it has always been in a state of becoming... &...
10 Pages(2500 words)Essay

...Section/# Tax, Resistance, and Hubris: The Case of Colonial Resistance to British Parliament and Taxation The issue of early Colonial resistance to the British Empire was not something that could easily be defined. As a result of the unique American experience, the issue of taxation without representation has been proven to be an irritant but served more as a flashpoint of contention between the already irritated colonials. As a function of seeking to understand some of the nuances that exist within this situation, the following essay will seek to briefly trace the issues that precipitated the resistance against taxation by the British Empire as well as...
5 Pages(1250 words)Essay

...? British East India Company The East India Company was initially commissioned as Company and Governor of London Merchants trading in the Eastern Indies. It was habitually termed as the Honorable Eastern India Co. In 1707, it became the British joint-stock Co as well as a megacorporation created to pursue trade undertakings in the Eastern Indies. The company ended up dealing mostly with the Northern-west frontier region, Indian mainland as well as Balochistan. The British East India firm dealt mostly in silk, indigo dye, cotton, salt, opium, tea and saltpeter (Bowen, Margarette & Nigel, 2003). In 1600, Queen Elizabeth contracted a Royal Charter to the company, thereby,...
5 Pages(1250 words)Essay

...“internal colonialism”, those relationships, according to Levine, did little, if anything, to narrow the gap between the rich and the poor, but exploited the divide for colonial ends (11). Insofar as the poor had found a solution, although not always an easy one, to their problems, migrating in large numbers from their impoverished regions into distant lands, the eighteenth- and nineteenth-century British Empire is largely considered “a significantly Scottish enterprise” (Levine 11). On the other hand, as Judd points out, the primary motive and most powerful drive behind the establishment of the Empire and its global growth was the “desire for profitable trade, plunder...
10 Pages(2500 words)Essay

The End of the Ottoman Empire

...Module Module ID: ‘The End of the Ottoman Empire’ The present paper aims to make a critical evaluation of the work ‘The End of the Ottoman Empire’ created by Elie Kedourie (1968), by elaborating the reasons behind the fall of the mighty empire as well as the abolishment of the traditional caliphate, which had been an essential part of the age-old political system of the vast region encompassing the entire Middle East for the last five centuries. The end of the Ottoman Empire apparently looked to be the outcome of the military defeat of the Triple Alliance in WWI by the opponent politico-strategic alliance; somehow, the...
5 Pages(1250 words)Essay

...Padmajah Badri Email, padmajah@gmail.com Citation Style, MLA March 16, 2009 Discuss the evolutionary process leading the colonies to the point of rebellion using specific examples of British policies and Colonial response. British colonies were gaining more power by the end of 17th century leading to the origin of colonial government like royal, proprietary and corporate. There was a drastic change in eighteenth century as the corporate and proprietary colonies were transformed in to royal colonies imposing more restrictions on colonies like Sugar Acts of 1733 and 1764 and Iron Act of 1750.There was a steep increase in colonial trade in 1764 with a revenue of 2 million for Great Britain...
6 Pages(1500 words)Essay

... much changed our fortune as revealed realities" (Louis, page 129). Where as Roger Louis state it by saying that, "the goal was not that Britain should sustain the Empire but that the Empire, in a new form, should continue to sustain Britain."(Louis) Basically the interest of Britain in Palestine expressed itself in the capitulations won from the Turks. It allowed them to find charitable works such as exploratory surveys, hospitals and like those of the Conder. In the nineteenth century there were over athousand British surveys. These exploratory travels like Burton and Livingston preceded British imperial involvement in the region.British interest in the Middle East increased by the end of the nineteenth century for the reason... ,...
10 Pages(2500 words)Essay

Was the British Empire a force for good

...British Empire was not a Force for Good  The empire began in the early 1600s and ended some years after the end of World War 2 where most of its colonies had assumed independent state before 1970. When the World War 1 came to a stop, the British Empire covered approximately 25 percentage of the entire world land mass. The chief motive of development of this empire by the Britons was built along enhancing trade, cultural expansion, and religion facilitating modernisation to move in line with time standards (Walsh, 2003); although, this did not happen. The British empire introduced significant changes to the colonies that they controlled including infrastructural development, cultural integration and communication changes. A number... of...
5 Pages(1250 words)Essay
sponsored ads
Save Your Time for More Important Things
Let us write or edit the research proposal on your topic "The End of the British Empire" with a personal 20% discount.
GRAB THE BEST PAPER

Let us find you another Research Proposal on topic The End of the British Empire for FREE!