Comments (0)
Add to wishlistDelete from wishlist
Cite this document
Summary
But he also believes that to maintain those values in changing times, people must come together to evolve new mechanisms that would help meet the…
Download full paperFile format: .doc, available for editing
HIDE THIS PAPERGRAB THE BEST PAPER97.9% of users find it useful 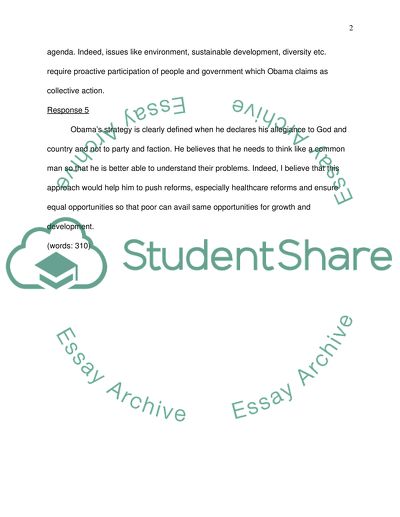 Response President Obama upholds the fundamental values of founding constitution for ensuring equality and freedom to pursue happiness. But he also believes that to maintain those values in changing times, people must come together to evolve new mechanisms that would help meet the challenges of time.
Response 2
The philosophy of collective action to meet the challenges of time is integral to the inaugural address of President Obama. The fast changing technologies, rapid globalization, environment degradation, increasing terrorism etc. are important issues which need to be addressed collectively.
Response 3
When Obama refers to absolutism, he indirectly refers to the rigidity of republicans to embrace change. Obama has directly challenged the political ideologies of republicans that thrive of rigid principles and says that they must evolve with times to meet new challenges successfully. He is actually referring to the realistic values of American democratic process that is able to acknowledge change and innovate to ensure the fundamental values of freedom and equality to the people.
Response 4
President Obama’s inaugural address asserts his agenda for the current presidential tenure. He is serious in promoting universal healthcare, greater opportunities for marginalized population and new responses to face other challenges of times. New issues like climate change, gays’ rights etc. have also been included in his agenda. Indeed, issues like environment, sustainable development, diversity etc. require proactive participation of people and government which Obama claims as collective action.
Response 5
Obama’s strategy is clearly defined when he declares his allegiance to God and country and not to party and faction. He believes that he needs to think like a common man so that he is better able to understand their problems. Indeed, I believe that this approach would help him to push reforms, especially healthcare reforms and ensure equal opportunities so that poor can avail same opportunities for growth and development.
(words: 310)
Reference
The New York Times. (2013, January 21). Barack Obamas Complete 2013 Inauguration Speech. Podcast retrieved from http://www.youtube.com/watch?v=zncqb-n3zMo Read More
Share:
Tags
Cite this document
(“President Obama's Innauguration Address Assignment - 1”, n.d.)
President Obama's Innauguration Address Assignment - 1. Retrieved from https://studentshare.org/history/1613590-president-obamas-innauguration-address

...? Barack Obama: The 44th President of the United s living an American Life and finding Common Good for All
5 Pages(1250 words)Research Paper

...? President Obama s Introduction: Every now and again, there are times when events redefine history and set precedents that generations follow. The idea of a black man leading the charge of the most powerful country in the world would have been ridiculed and ignored not so long ago; however the emergence of Barack Obama has transformed realities and created an incomparable precedent for the world to follow. The reality of his performance, however, has been subject to serious scrutiny. Barack Obama is the 44th president of the United States. Having a Kenyan father and spending some time in Indonesia, Obama is considered as...
8 Pages(2000 words)Essay

...in the international scenario. As the BBC Radio 4’s Today program evaluates, President Obama has not just been the first black man in the White House but also ‘a new sort of American president’: thoughtful, reflective and determined to represent all of his country. (Mardell). This remark about the leadership of the president very well reflects the various aspects of the policies of his government. All through his tenure, the President has given great thought and reflective attitude towards the various issues facing the nation, be it economic crisis, employment issues, or matters of international affairs. Most of the Americans considered,...
4 Pages(1000 words)Essay

...A Critique of President Obamas Inaugural Address: President Obama’s historic inaugural speech on 20th January, 2009 was powerful and persuasive. Coming at a time when the nation was confronting the worst economic slump in seventy years, the speech contained within it the necessary reassurance and the promise of change that were so desperately needed. To his credit, the new President was mild in his criticism of his predecessor George W. Bush. To the contrary, the speech appeared to focus on the progress and prosperity in the years ahead rather than point finger at the perpetrators of the present state of chaos. In the very beginning of...
4 Pages(1000 words)Essay

...of Osama Bin Laden, these efforts didn’t occur until his second term as president. (Davis 2003) From the beginning of Obama’s Presidency these conflicts in the Middle East were central concerns of his foreign policy. In his inaugural address President Obama indicated that he would begin withdrawing troops from Iraq and that the war in Afghanistan would continue. Indeed, soon after taking office he sent an additional 17,000 troops to the region. The war in Afghanistan has remained a central, yet controversial issue for the Obama Presidency. While a deadline for withdrawal has been given as July 2011, this...
10 Pages(2500 words)Term Paper

...The Presidency of Barack Obama Barack Obama, the 44th President of the United s and first African American to hold the office was inaugurated on January 20, 2009 amidst a deep global economic recession, involvement in two long-standing foreign wars, crippling National Debt, skyrocketing unemployment and a global climate change crisis among other major problems. Obama was introduced to the national audience during the 2004 Democratic convention.  He rejected the divide in America between “Red States” and “Blue States” saying “there is not a liberal America and a conservative America. There is the United States of America.” His inspiring...
7 Pages(1750 words)Research Paper

...Task Remarks on President Obama’s Speech at CU Denver President Obama said that he would approve changes involving federal policies, which would make it easier for college students to be able to reimburse their loans. These changes that will make it possible for college loans to be at affordable prices and at the same time make it easier for the students to be able to repay the loans back after clearing with school. The president urged the students to first know what the loans were all about before applying to get them. He told the students about a plan that would enable graduates repay their loans with a maximum of 10 percent, the income they got after...
2 Pages(500 words)Essay

...President Obama’s Inauguration Address As the president set up his address with these comments, he is trying to get at a point that the aspiration set up by the founding fathers of the United States are still pertinent and essential to everyone. As such, he is informing his audience that they have a duty to uphold the spirits of the American constitution. 2. The philosophy that the president suggests in this sort of phrases is that of collectivism. He implies some sort of independence between the citizens of United States. It is for this reason that he has emphasized on facing the current agenda together. He in fact stipulates that...
1 Pages(250 words)Essay

...far. Obama is a transformational leader going by his stance on America’s relations with other countries, especially those in the Middle East. While many of his predecessors preferred to brush shoulders violently with other countries, Obama prefers to approach other countries with respect, encouraging dialogue. During Obama’s presidency, the U.S. has not faced a serious security threat of the kind of 9/11. This being the case, it remains to be seen how Obama would lead the country against a nation or people that the country considers a serious security threat. All the same his charisma has been seen in the way he dealt with the financial crisis and the...
1 Pages(250 words)Essay

...President Washington’s Inaugural Address Washington’s first inaugural address is seen as one of the most remarkable speeches of US presidents as it set certain rules and conventions. The president gave his oaths and revealed his ideas on his presidency and the future of the nation. The address is quite solemn and it appeals to people’s hearts as it has references to major American values. It is possible to note that Washington defined presidency as the president’s responsibility “to recommend” to people’s “consideration, such measures as he” would “judge necessary and expedient” (as...
2 Pages(500 words)Assignment
sponsored ads
Save Your Time for More Important Things
Let us write or edit the assignment on your topic "President Obama's Innauguration Address" with a personal 20% discount.
GRAB THE BEST PAPER

Let us find you another Assignment on topic President Obama's Innauguration Address for FREE!