Comments (0)
Add to wishlistDelete from wishlist
Cite this document
Summary
There have been arguments that African states, for instance, are not ready for democracy. Take for instance in Kenya, violence erupted after the disputed elections. This brings back the old…
Download full paperFile format: .doc, available for editing
HIDE THIS PAPERGRAB THE BEST PAPER97.3% of users find it useful 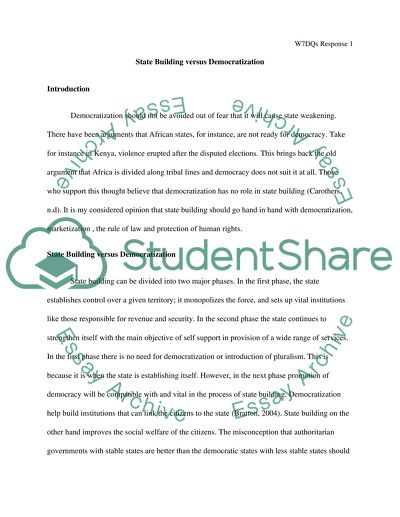 Running head: HISTORY AND POLITICAL SCIENCE W7DQs Response Insert Insert Grade Insert Building versusDemocratization
Introduction
Democratization should not be avoided out of fear that it will cause state weakening. There have been arguments that African states, for instance, are not ready for democracy. Take for instance in Kenya, violence erupted after the disputed elections. This brings back the old argument that Africa is divided along tribal lines and democracy does not suit it at all. Those who support this thought believe that democratization has no role in state building (Carothers, n.d). It is my considered opinion that state building should go hand in hand with democratization, marketization , the rule of law and protection of human rights.
State Building versus Democratization
State building can be divided into two major phases. In the first phase, the state establishes control over a given territory; it monopolizes the force, and sets up vital institutions like those responsible for revenue and security. In the second phase the state continues to strengthen itself with the main objective of self support in provision of a wide range of services. In the first phase there is no need for democratization or introduction of pluralism. This is because it is when the state is establishing itself. However, in the next phase promotion of democracy will be compatible with and vital in the process of state building. Democratization help build institutions that can link the citizens to the state (Bratton, 2004). State building on the other hand improves the social welfare of the citizens. The misconception that authoritarian governments with stable states are better than the democratic states with less stable states should be avoided at all. In such countries the state may provide most of the needs of the people but the human rights are not respected. The wealth of such states is not equally shared. The political elites own most of the wealth while the majority of the masses are left poor. The people are oppressed and they do not live freely. The regimes saw the seed of their own destruction. They deny the citizens the political goods and their stability is short lived. The aggrieved or neglected sections of the society will rise up against the government to demand recognition and this might lead to overthrow of existing governments.
It is also important to note that there can be no democracy without state building. A state with weak institutions cannot promise its citizens free and fair elections. These states lack both democracy and state building capacity. They are failed states. But I would not prefer to live in an authoritarian stable state as opposed to weak failed states because in both cases there is suffering both home and abroad. Take for instance foreign aid; both sides may not access it.
Conclusion
In conclusion, it is important to note that state building and democracy should go hand in hand. A country should establish its territory, gain control over it, and establish the necessary institutions. The following period involves strengthening the state by ensuring the state can be self supporting. This should be done with promotion of democracy. Lack of democracy invites protests and revolutions in countries and should be avoided at all costs. A citizen should not breathe a sigh of relief for being in an authoritarian stable state because some citizens in the same country may be suffering as those in failed states.
Reference List
Bratton, M. (2004). State Building and Democratization In Sub-Saharan Africa: Forwards, Backwards, Or Together? Working Paper No. 43. AfroBarometer
Carothers, T. (n.d). Democracy Promotion and State Failure. Retrieved January 26, 2013 from http://www.boell.org/downloads/hbf_failed_states_talk_series_Rotberg(1).pdf Read More
Share:
Tags
Cite this document
(“W7DQs Response Assignment Example | Topics and Well Written Essays - 500 words”, n.d.)
W7DQs Response Assignment Example | Topics and Well Written Essays - 500 words. Retrieved from https://studentshare.org/history/1613501-w7dqs-response

CHECK THESE SAMPLES OF W7DQs Response

...Response to and 2 al Affiliation: Response to and 2 Response to The conversation between student 1 and his mother in an example of a transactional model of communication. Their communication is surrounded by a lot of obstructions. However student 1 and the mother seemed happy after the conversation. This indicates that communication between them was successful. The moods of both student 1 and his mother are influential in facilitating the conversation. I agree with the student’s idea that good moods facilitate effective communication. They are in a happy and excited mood and are able to communicate well. Student 1 claims that the noise from the television distracted their attention a...
1 Pages(250 words)Assignment
sponsored ads
Save Your Time for More Important Things
Let us write or edit the assignment on your topic "W7DQs Response" with a personal 20% discount.
GRAB THE BEST PAPER

Let us find you another Assignment on topic W7DQs Response for FREE!