The U.S. energy crisis in the 1970's - Assignment Example

Comments (0)
Add to wishlistDelete from wishlist
Cite this document
Summary
Among these were the affluent consumerist lifestyle of the American citizens, the so-called “peak oil” concept in which proven oil supplies from existing wells were declining…
Download full paperFile format: .doc, available for editing
HIDE THIS PAPERGRAB THE BEST PAPER98.3% of users find it useful 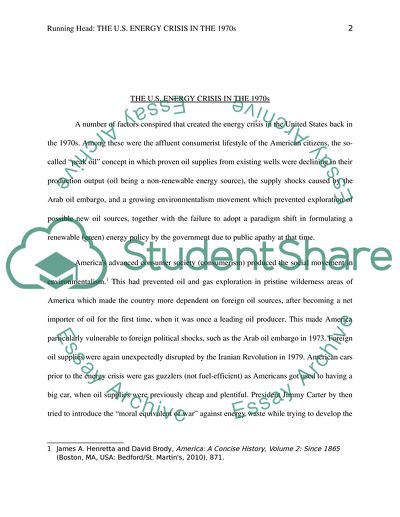 THE U.S. ENERGY CRISIS IN THE 1970s (A Response Paper) Full ID Number: of of School (University)
Word Count: 390
Date of Submission: January 11, 2013
THE U.S. ENERGY CRISIS IN THE 1970s
A number of factors conspired that created the energy crisis in the United States back in the 1970s. Among these were the affluent consumerist lifestyle of the American citizens, the so-called “peak oil” concept in which proven oil supplies from existing wells were declining in their production output (oil being a non-renewable energy source), the supply shocks caused by the Arab oil embargo, and a growing environmentalism movement which prevented exploration of possible new oil sources, together with the failure to adopt a paradigm shift in formulating a renewable (green) energy policy by the government due to public apathy at that time.
Americas advanced consumer society (consumerism) produced the social movement in environmentalism.1 This had prevented oil and gas exploration in pristine wilderness areas of America which made the country more dependent on foreign oil sources, after becoming a net importer of oil for the first time, when it was once a leading oil producer. This made America particularly vulnerable to foreign political shocks, such as the Arab oil embargo in 1973. Foreign oil supplies were again unexpectedly disrupted by the Iranian Revolution in 1979. American cars prior to the energy crisis were gas guzzlers (not fuel-efficient) as Americans got used to having a big car, when oil supplies were previously cheap and plentiful. President Jimmy Carter by then tried to introduce the “moral equivalent of war” against energy waste while trying to develop the rational national energy plan but the concept of alternative energy was just a nascent idea then.2 The government had implored people to reduce energy use, such as setting the speed limit at 55 miles per hour and turning off unnecessary electric lights, like not lighting their Christmas trees.3 But perhaps most importantly, people had not yet grasped the full importance of the concept of “peak oil” which means oil supplies will continue on an irreversible downward trend forever.4 It simply means people cannot continue using oil like they did before, as supplies are running out; people need to find alternative energy sources which are environment-friendly too. Moreover, the social movement of environmentalism had some extremist advocates, who did not want any type of exploration activities at all; the idea of conservation did not appeal to them (the wise and prudent use of natural resources) and all they want is complete preservation.5
Bibliography
Abdullah, Bilaal. Peak Oil Paradigm Shift: The Urgent Need for a Sustainable Energy Model. Trinidad and Tobago, West Indies: Medianet Limited, 2004.
Anonymous. “Time Trip: The 1970s Energy Crisis,” Current Events 105, no. 10 (November 11, 2005): 2.
Black, Brian. “Jimmy Carter and the Energy Crisis of the 1970s: Crisis of Confidence,” Environmental History 11, no. 1 (January 2006): 141-142.
Cutter, Susan L., and William H. Renwick. Exploitation, conservation, preservation: A geographic perspective on natural resource use. Hoboken, NJ, USA: John Wiley & Sons Incorporated, 2004.
Henretta, James A., and David Brody. America: A Concise History, Volume 2: Since 1865, 4th ed. Boston, MA, USA: Bedford/St. Martins, 2010. Read More
Share:
Tags
Cite this document
(“The U.S. energy crisis in the 1970's Assignment Example | Topics and Well Written Essays - 250 words”, n.d.)
Retrieved from https://studentshare.org/history/1612598-the-us-energy-crisis-in-the-1970s

CHECK THESE SAMPLES OF The U.S. energy crisis in the 1970's

The growth of the U. S. Military

...the 1970-1980s, the Soviet Union was coming down because of the financial crisis. The union lacked adequate finances to run the system. Russian political and social reforms that came under new leadership did not favor the survival of the union. In 1991, the union split and withdrew from the Cold War marking its end. The United States then obtained a monopoly in global control. It is the only existing global power (Gaddis, 2011). Effects of the Cold War on American Military The Cold War defined the organization, policies and spending of the American military since 1945. The military has a civilian control of a secretary of the military who works under the president to control five of the seven uniformed...
6 Pages(1500 words)Research Paper

...New Right and 1970's - 1990's Introduction The New Rights period started around the 1970’s in America with the election of Ronald Regan as the county’s president (Nelson 7). Other leading countries in the world adapted the New Rights between 1970’s and 1980’s. These countries were; Australia, Chile, France, Germany, Netherlands, New Zealand, Poland, Romania, South Korea and the United Kingdom. Many reasons contributed to this change in world politics. Economic problems became serious political problems in American politics with massive government programs of the 1960s and the economic problems in the...
5 Pages(1250 words)Essay

...? World War II through the 1970’s A turning point is an event which most observers would agree that what happens next is inevitable.At a time when a war is going on, the fog of the war often makes it difficult to identify all the effects of any one victory. There were several turning points in America through the 1970s. These were the points of time when a significant change occurred. They were also moments of decision. At this time, there were many changes taking place around the world. Millions were dead, and the United States had become a super power (Finkelman, 2005). A sweeping historical turning point during the Second World War through the 1970s was the Watergate...
5 Pages(1250 words)Research Paper

...? HOW DID THE 1970'S OIL CRISIS AFFECT THE US SAUDI RELATIONS? Introduction The diplomatic relations between the United States and Saudi Arabia is a historic one. Commencing even before the onset of the Second World War, the relationship between the two countries has continued to flourish for decades. This has mostly been attributed to the symbiosis kind of relations between the two countries. During the Second World War and cold war, Saudi Arabia benefitted from the constant supply of latest weapons. In addition to that, it received direct military support from Washington, to guard its territories against any potential external aggression. On her part, the United States was in need of...
12 Pages(3000 words)Essay

...Dixit Page 5 Academia research Satyaprakash dixit Satyaprakash dixit 12th August 12, 2007 Topic: American films in the 1970s. The 1970s are widely considered to be the golden age of American cinema. The decade witnessed a revolutionary period for American cinema that left its impacts on not only on the American film industry but the entire world cinema. The decade, for the first time saw a new American movie culture that saw the production of stylishly entertaining movies that could be enjoyed both emotionally and intellectually. Some of the finest film makers of the era such as Arthur Penn, Mike Nichols, Robert Altman, Coppola, Scorsese, Spielberg and John Cassavetes banged their entry into the film...
5 Pages(1250 words)Essay

..., 2005). Work citied Greenberg, Brian, and Linda S. Watts. Social History of the United States. Santa Barbara, Calif: ABC-CLIO, 2009. print. Hamilton, Neil A. The 1970s. New York: Facts On File, 2006. Internet resource. Horowitz, Daniel. Jimmy Carter and the Energy Crisis of the 1970s: The "crisis of Confidence" Speech of July 15, 1979 ; a Brief History with Documents. New York, NY [u.a.: Bedford/St. Martins, 2005. Print.... "Crisis of Confidence" in the United s The United s was a dominant world power in the 1970’s even though the countries self-perception was mired in doubt and malaise. The stagflation of the country’s economy, the experience and...
2 Pages(500 words)Admission/Application Essay
sponsored ads
Save Your Time for More Important Things
Let us write or edit the assignment on your topic "The U.S. energy crisis in the 1970's" with a personal 20% discount.
GRAB THE BEST PAPER

Let us find you another Assignment on topic The U.S. energy crisis in the 1970's for FREE!