Comments (0)
Add to wishlistDelete from wishlist
Cite this document
Summary
That was beset with many conflicting problems with Bush Administration. Earth-shaking events in some part of the world, does not mean that America has to intervene, when its interests are not at stake. The…
Download full paperFile format: .doc, available for editing
HIDE THIS PAPERGRAB THE BEST PAPER93.1% of users find it useful 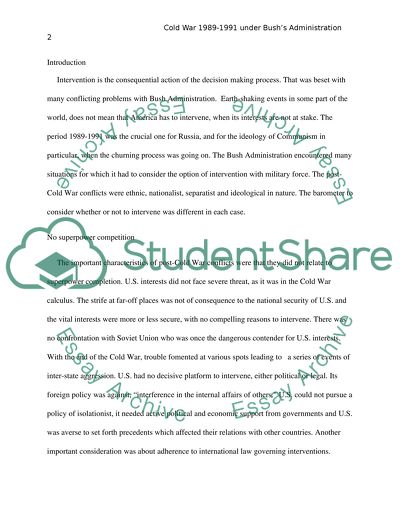 Introduction
Intervention is the consequential action of the decision making process. That was beset with many conflicting problems with Bush Administration. Earth-shaking events in some part of the world, does not mean that America has to intervene, when its interests are not at stake. The period 1989-1991 was the crucial one for Russia, and for the ideology of Communism in particular, when the churning process was going on. The Bush Administration encountered many situations for which it had to consider the option of intervention with military force. The post-Cold War conflicts were ethnic, nationalist, separatist and ideological in nature. The barometer to consider whether or not to intervene was different in each case.
No superpower competition
The important characteristics of post-Cold War conflicts were that they did not relate to superpower completion. U.S. interests did not face severe threat, as it was in the Cold War calculus. The strife at far-off places was not of consequence to the national security of U.S. and the vital interests were more or less secure, with no compelling reasons to intervene. There was no confrontation with Soviet Union who was once the dangerous contender for U.S. interests. With the end of the Cold War, trouble fomented at various spots leading to a series of events of inter-state aggression. U.S. had no decisive platform to intervene, either political or legal. Its foreign policy was against, “interference in the internal affairs of others." U.S. could not pursue a policy of isolationist, it needed active political and economic support from governments and U.S. was averse to set forth precedents which affected their relations with other countries. Another important consideration was about adherence to international law governing interventions. Without the correct international legal rationale, any intervention would be termed as an act of self-seeking, with motivated desires and with hidden agenda.
Confusing world scenario
Decisions for intervention needed to be taken, explained and defended. The break-up of the Soviet Union was an important development, but no American interests were threatened. Besides, it was an ideological conflict and power-struggle between two factions, both owing allegiance to Communism. Intervention decisions have far-reaching economic implications, besides the need for solid domestic support. In the confusing world scenario, with many set of actions taking place simultaneously in different parts of the world, the decision-making process cannot be expected to be orderly and well-structured. That the issue will be listed in the agenda of the decision makers on account of intensive media coverage in the entire world or a part of the world does not mean that the decision to intervene needs to be taken. For example, in the final analysis it is Bush who had to take the decision whether the confrontation in Yugoslavia was an act of civil war or a humanitarian tragedy.
Hands-off role played by Bush Administration
A question that constantly engaged Bush was the role of U.S. in the post-Cold-War period that was hailed as the new world order and protection of U.S. interests in the changed set of circumstances. U.S. was utilizing this period as the one learning from experience. The experts were formulating the checklist for intervention and that was the handy asset for Bush to take decisions. Initially, the decision making process was addressed by the Deputies Committee and then referred to Cabinet-level officials before being tendered to the President for the final decision. He has to take into opinion both the civilian and military aspects on the intervention. Therefore, decision-making turns out to be probabilistic and context-dependent. The most important underlying issue is not to intervene unless there is a high probability of success. Taking the above factors into consideration, the hands-off role played by Bush Administration is justifiable. The time of Cold War was entirely different and U.S. had strong reasons to defend its position against the Superpower Soviet Russia, which was then its contender (enemy) number one. The passive role during 1989-1991 was correct and there was no cause for intervene more forcefully. In his book “Decision Points,” George W Bush (2011) writes, “Decades from now, I hope people will view me as a President who recognized the central challenge of our time and kept my vow to keep the country safe; who pursued my convictions without wavering but changed course when necessary.”(p.476) Critical decisions shaped his Presidency, which were mostly correct.
Conclusion
The bloodless revolution in Czechoslovakia, the violence in Romania resulting in the defeat of Communism and change of political leadership, the breaking up of the Soviet Union (the Baltic States were annexed by Stalin in 1940), the trouble to the leadership of Gorbachev and his eventual resignation, were all serious issues but did not merit the military intervention by U.S. under the leadership of George Bush.

CHECK THESE SAMPLES OF Cold war 1989-1991 under Bush's Administration

...officially at the Malta Summit on December 3, 1989 by George Bush (Arne, 2007). There have been various literary contexts about the cold war like “The Remains of the Day by Ishiguro Kazuo”. The Remains of the Day incorporate two memory streams – the present, in 1956, and the past, in the 1920s and 1930s. The narrator, Stevens, goes on a trip where he reflects on his past and the happy days of England. He realizes the ideals he has stuck to in his entire life no longer hold. He is nostalgic of the old English ways and the world that ended with Lord Darlington’s death, his previous master. As Britain’s imperial power and role in world affairs come to an end, wealth and...
8 Pages(2000 words)Essay

...Prof’s The Cold War had many causes, but the fundamental causes were the fact that the United s and the Soviet Unions were by far the two most powerful countries in the world during the Cold War years (Chafe 2009: 117), and the fact that the two believed each other’s existence to be anathema to the other: that either capitalism or communism would need to be a new world order. The United State’s strategy during the Cold War shifted slightly, but also remained surprisingly constant. One of the pillars of this strategy was not ever involving the United States in direct confrontation with the Soviet Union: there was a very...
3 Pages(750 words)Essay

...in preparation for a Russian offensive that never came. There is no doubt that the cold war was a close call, and it showed the world the folly of another war since it is very unlikely there would have been a sure winner, but unequivocal that millions of lives would have been lost. Bibliography Nissani, Moti. “Weapons Of The Cold War Lives in the Balance: Chapter 4. The Cold War and American Politics.1945-1991” Wakefield, N.H: Hollowbrook Publishing. 1992. http://www.is.wayne.edu/mnissani/PAGEPUB/CH4.html [Accessed 6 November 2012.] Jeremi, Suri. “Explaining the End of the Cold War:A New...
5 Pages(1250 words)Research Paper

...A Critical Evaluation of the US Policy For the Cold War from 1946-1965 After the fall of Germany, for President Harry Truman, the Soviet leaders’ reluctance to retreat from the wartime frontline in Europe and the Middle East was essentially a clear sign of the Communist Imperialism which could severely hamper the United States’ interests in the oil-rich countries in the Middle East and European. After the Potsdam Conference and the uprising in Greece, several factors were clear that the Soviet leaders were not going to give up their control over the Eastern Europe and the Middle East. This perception of Truman’s Administration about the communist Russia’s expansionist intention played a...
5 Pages(1250 words)Essay

War on Terrorism under the Bush administration

...War on Terrorism Question The three foreign policy goals of political and economic freedom, peaceful inter relations, and respect for human dignity have not been realized under the Bush administration. Our political freedom has been hampered by the politics of fear and the ability of both parties to exploit the issue of terrorism for their own political gain. The economic cost of the war has necessitated that the US postpone and cancel the implementation of needed social programs such as health care and social security reform. Rather than giving the citizens greater freedom, the war on terror has enslaved the populous. The...
2 Pages(500 words)Essay

...History and Literature Through scholarly research, history and literature are inseparable. Literature portrays itself as a necessity in history especially during the cold world war. It was a period of conflict short of full-scale war, which was natured by mutual perceptions of hostile intentions of democracy and capitalism against communism and command economy between the U.S and the Soviet Union (Smith 18). This was due to greed for leadership. It is clear that subsequent wars known as the ‘proxy ‘ always broke out between two military-political alliances. The activities of the “The cold war (1945 - 1991)” prove the...
2 Pages(500 words)Essay

...The Cold War came up because of the competition on a global scale of the world’s two superpowers, the United s and the Soviet Union. There was a great fear in the United States of the Soviet Union’s ambition to spread the ideology of communism, which it followed, worldwide and this was not acceptable to the American government. In response, the American government chose to shore up those regimes, which were allied to it all over the world not only financially but also militarily to ensure that they combated the potential communist forces and parties which were to come up against them (Mueller 172). Moreover, the Soviet Union was very fearful of the American acquisition of atomic weapons,...
2 Pages(500 words)Essay

...Cold War was a unique phenomenon of post WW2 international relations when the two nations, especially the two superpowers: USA; and USSR had developed hostile relations defined by sharp conflicts within political diplomacy and Economic areas. According to Murrin et al. (2011) cold war was not only confined to international relations but it had encompassed myriad aspects of domestic and international conditions which had huge impact on the people at large. He affirms that in international relations, Cold War affects social conditions at the national and local level and may also remain in background and serve as catalyst that may adversely...
1 Pages(250 words)Essay
sponsored ads
Save Your Time for More Important Things
Let us write or edit the essay on your topic "Cold war 1989-1991 under Bush's Administration" with a personal 20% discount.
GRAB THE BEST PAPER

Let us find you another Essay on topic Cold war 1989-1991 under Bush's Administration for FREE!