Comments (0)
Add to wishlistDelete from wishlist
Cite this document
Summary
This paper attempts to provide critical response for two literary works namely ‘Contested Hegemony: The Great War and the Afro-Asian Assault on the Civilizing Mission Ideology’ and ‘Post modernism and Periphery’.
“In the decades before the Great War, white European…
Download full paperFile format: .doc, available for editing
HIDE THIS PAPERGRAB THE BEST PAPER91.3% of users find it useful 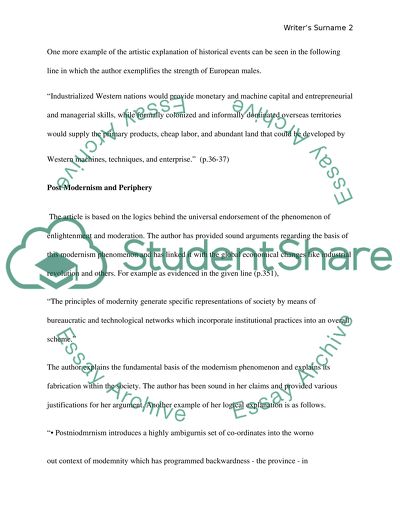 Reading Response This paper attempts to provide critical response for two literary works ly ‘Contested Hegemony: The Great War and the Afro-Asian Assault on the Civilizing Mission Ideology’ and ‘Post modernism and Periphery’.
Contested Hegemony
“In the decades before the Great War, white European males reached the pinnacle of their power and global influence.” (p.36). Being based on English history, the article provided a sound reflection of their impression the British rule laid on the cultural aspects of African and Asian nations. This particular line depicts the way the First World War impacted the European nations. However, reading the article I didn’t seem to be interested in the topic and my interest was further distorted by the difficult explanatory tactic applied by the author. It seems the article is formulated taking into consideration the historical documentation style. But since the period before and after the First World War did brought up drastic changes on the globe, the article provided me a quite wide picture on the era. So overall I initially resisted to read the article but with the progression in reading I started comprehending it and the style was no more naïve to me to understand.
One more example of the artistic explanation of historical events can be seen in the following line in which the author exemplifies the strength of European males.
“Industrialized Western nations would provide monetary and machine capital and entrepreneurial and managerial skills, while formally colonized and informally dominated overseas territories would supply the primary products, cheap labor, and abundant land that could be developed by
Western machines, techniques, and enterprise.” (p.36-37)
Post Modernism and Periphery
The article is based on the logics behind the universal endorsement of the phenomenon of enlightenment and moderation. The author has provided sound arguments regarding the basis of this modernism phenomenon and has linked it with the global economical changes like industrial revolution and others. For example as evidenced in the given line (p.351),
“The principles of modernity generate specific representations of society by means of bureaucratic and technological networks which incorporate institutional practices into an overall scheme.”
The author explains the fundamental basis of the modernism phenomenon and explains its fabrication within the society. The author has been sound in her claims and provided various justifications for her argument. Another example of her logical explanation is as follows.
“• Postniodmrnism introduces a highly ambigurnis set of co-ordinates into the worno
out context of modemnity which has programmed backwardness - the province - in
order to re-integrate it more readily into itt framework of global nsu tion.” (p.355).
It can thus be concluded that both documents are well written and the authors have done a great attempt in explaining the subject with various logical examples.
Works Cited
Adas, Michael. “Contested Hegemony: The Great War and the Afro-Asian Assault on the Civilizing Mission Ideology.” Journal of World History, Vol. 15, No. 1 (Mar., 2004), pp. 31-63. Print.
Riahard, Nelly. Postmodernism and Periphery” in Theory in Contemporary Art Since 1985, edited by Zoya Kocur and Simon Leung. pp.351-359. © 2005 Blackwell Publishing. Print. Read More
Share:
Tags
Cite this document
(“Reading Response Book Report/Review Example | Topics and Well Written Essays - 250 words - 2”, n.d.)
Retrieved from https://studentshare.org/history/1609674-reading-response

CHECK THESE SAMPLES OF Reading Response

...? Reading Response al Affiliation In Lievrouw and Livingstone’s work (as cited in Flew & Smith, , they deem that the determination and study of forms of new media is underlined by three basic principles. First is a detailed analysis of the tools and gadgets that create the ability to communicate. These tools may vary from mobile phones to computers and CD-ROMS. The second element of new media is a look into the communication behaviors, and the procedures that we undertake in the process of using these gadgets. Lastly, there is a consideration of the resultant social implications of the use of the communication gadgets, and the manner in which they are used. The social framework that forms around the use of the communication tools... Reading...
3 Pages(750 words)Essay

...Book Report/Review, Anthropology Reading Response The article "Sexuality at stake: The essentialist and constructionist approaches to sexuality in anthropology" by Jan Lofstrom focuses on exploring prominence of sexuality. Some of the main arguments made in this article focuses on the defining sexuality. The other argument focuses on perception of essentialist and constructionist regarding sexuality. The article also explores a discussion of Bronislaw Malinowski regarding sexuality; in fact, this discussion focuses in the theoretical configuration of sexuality that is considered to be an intrinsic feature in human beings (Lofstrom, 3). The other discussion focuses on Margaret Mead’s argument regarding...
3 Pages(750 words)Book Report/Review

...?Chapter 8 en d “Talking about Things” simply delves into the core of communication, particularly in the aspect of thought and message construction. Apparently, the point of the whole chapter points toward the importance of learning the basic and rudimentary rules in using a language, particularly the English language, which is quite complex: that words do not make complete sense on their own unless we combine them to create a sensible thought. The English language uses parts of speech i.e. noun, verb, pronoun, preposition, etc. and they are presented in words; nevertheless, these words do not make complete sense unless they are grouped together, in a relevant fashion, to create a complete thought that is comprehensible... 8 en d “Talking...
3 Pages(750 words)Essay

...Reading response Fredric Jameson in his essay ‘Postmodernism and Consumer Society’ describes the concept of postmodernism as it evolved from high modernism. Jean Baudrillardnin ‘The Ecstasy of Communication’ describes how technology has made communication in the world today obscene Jameson (2) indicates “Pastiche is one of the most significant features or practices of postmodernism”. Pastiche generally involves the imitation of other styles (Jameson 2). At this point, I agree with the author since most cultures are developed based on aspects adopted from other styles/ cultures. Post modernism developed from high modernism. However, Postmodernism may not entirely be based on imitation of other styles....
1 Pages(250 words)Book Report/Review

...Full Globalization is not Americanization Joseph Nye’s Fear Not Globalization clearly s his call to his readers notto be afraid of this phenomenon rather should embrace it as a means to better modern life. He acknowledges the fact that there are those who do not like the idea of globalization however, misunderstanding it to be synonymous to Americanization. The author clarifies this in his article by explaining that globalization does not necessarily mean that all other cultures will be wiped out as people around the world look to America as the primary culture. Instead, Nye says that globalization allows other nations or cultures bring out their best as a contribution to a democratic world which has the right to either embrace... Globalizatio...
1 Pages(250 words)Book Report/Review

...Response to the Article, “Don’t Put a Bird on It: Saving “Craft” from Cuteness” Times have changed and the way people perceive different things has continued to vary widely. As a result of changes in technology and quality of life, the world view of craft has changed tremendously. It is apparent that there are individuals who have taken craft to be outdated and obsolete. However, this is not the case for quite a reasonable group of people myself included. This article presents my opinion concerning Alexandra Lange’s article that was published in the New York Times entitled “Don’t Put a Bird on It: Saving “Craft” from Cuteness”. Craft is a very important component that helps people to be creative as well as promotes...
2 Pages(500 words)Essay

...Response Paper Response Paper The article ‘A Taste of Empire 1600-1800’ is written by James Walvin1 (Walvin 1997). I believe that James in the article illustrates about Asian crops such as sugar, tobacco and tea that British nation has become addictive. In the article, the author argues that these crops have created an imperial invasion on the Europeans. The global trade of the European nations during 1600-1800 rooted bloomed trading of cheap good from the other part of the world rather than European colonies. On the other hand, the article ‘Brewing up Strom’ by Promeraz and Topik argues that voyages lead to the global trade which allowed other goods from Asian countries, particularly tea in becoming part...
1 Pages(250 words)Essay

...to violate the rights of the people based on gender and race. Response to the article After accruing wealth, Andrew Carnegie developed the gospel of wealth which focused on the development of an inclusive society where wealth would be ensured in the betterment of the society. The gospel was put into practice by him. Immediately after selling his company, he decided to use the money to upgrade and improve the education and the health sector. The move led to greater improvement of the society through provision of better health and education services. The gospel of wealth by Carnegie is an effective tool that can be used to solve the inequality in the world because it advocates for the sharing and using of the wealth in...
2 Pages(500 words)Essay

...that an educated slave would become sad and worse, wild. This act, however, affirms Douglass’s zeal to learn how to read and write because it is sanctioned by his master. In other words, he learns that education is tied to liberation especially after comprehending the word ‘abolition.’ Going North and beginning the antislavery campaigns forms the third central episode in Douglass’s life. During this crucial moment, the narrator is determined to participate in activities that could eventually result to the abolition of slave trade. Contrastingly, his escape is fraught with endless pitfalls (Douglass 47). He is caught the first time he attempts to escape from Mr. Covey, a ruthless negro-breaker and jailed for two years....
4 Pages(1000 words)Essay

...Mengjie Zhang Mills English 1A 10-4 Reading response Comprehension response The explores how advertisers used gender based adsin order to attract buyers. They explore the differences found in male and female in order to appeal to their different motivations. He asserts that although some ads targets both men and women, the ad makers explore the different stereotypes on gender. According to the writer, ads that target the male are grouped as men’s women and men’s men while those that target women are women’s men and women’s women. He then goes further to explore the differences in advert by looking at different examples. It can be observed that ads for women and men are different depending...
2 Pages(500 words)Book Report/Review
sponsored ads
Save Your Time for More Important Things
Let us write or edit the book report/review on your topic "Reading Response" with a personal 20% discount.
GRAB THE BEST PAPER

Let us find you another Book Report/Review on topic Reading Response for FREE!