Comments (0)
Add to wishlistDelete from wishlist
Cite this document
Summary
The North was commercial and industrial, while the south was agricultural; and the two sections had a difference related to…
Download full paperFile format: .doc, available for editing
HIDE THIS PAPERGRAB THE BEST PAPER98% of users find it useful 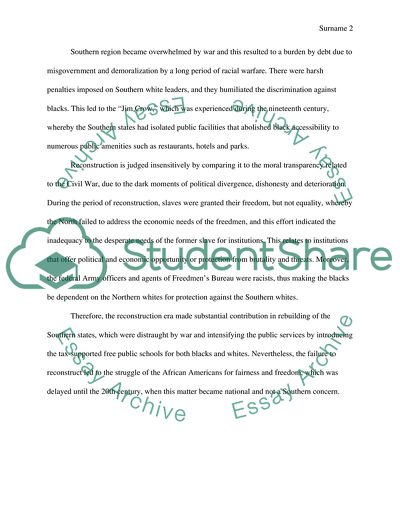 History and Political Science Civil War and Reconstruction There was a significant crisis faced by United s, whereby the Northern and Southern states had become less social, economical and political. The North was commercial and industrial, while the south was agricultural; and the two sections had a difference related to African-American slavery. In the North, there were efforts to limit the spread of slavery by abolishing it, while in the South, people wanted to maintain and expand the institution, hence making slavery a focal point of political crisis, in fact, during 1800-1860, the Southern economy built on "the backs of slaves". Therefore, the paper will focus on explaining the reason why the system failed and the reason behind the North winning the war, and it will explain the extent of the war and the reconstruction that followed in order to resolve the issues that created the breakdown.
After the elections in 1860 to the presidency of Republican Abraham Lincoln, there was a succession in the southern states from Federal Union in 1861, though it focused on establishing the independent Confederacy of state for protecting the slavery. On the other hand, the Northern Unionists focused on unconstitutional secession, whereby they were willing to apply the military force to keep the South in the Union. However, the Southerners who had no slaves were against the threatened Federal coercion. This resulted to a costly and bloody civil war and numerous American were killed in the Civil War, since the nations, wars were combined (Dew, 5).
Southern region became overwhelmed by war and this resulted to a burden by debt due to misgovernment and demoralization by a long period of racial warfare. There were harsh penalties imposed on Southern white leaders, and they humiliated the discrimination against blacks. This led to the “Jim Crow,” which was experienced during the nineteenth century, whereby the Southern states had isolated public facilities that abolished black accessibility to numerous public amenities such as restaurants, hotels and parks.
Reconstruction is judged insensitively by comparing it to the moral transparency related to the Civil War, due to the dark moments of political divergence, dishonesty and deterioration. During the period of reconstruction, slaves were granted their freedom, but not equality, whereby the North failed to address the economic needs of the freedmen, and this effort indicated the inadequacy to the desperate needs of the former slave for institutions. This relates to institutions that offer political and economic opportunity or protection from brutality and threats. Moreover, the federal Army officers and agents of Freedmen’s Bureau were racists, thus making the blacks be dependent on the Northern whites for protection against the Southern whites.
Therefore, the reconstruction era made substantial contribution in rebuilding of the Southern states, which were distraught by war and intensifying the public services by introducing the tax-supported free public schools for both blacks and whites. Nevertheless, the failure to reconstruct led to the struggle of the African Americans for fairness and freedom, which was delayed until the 20th century, when this matter became national and not a Southern concern.
Works Cited
Dew Charles. Apostles of Disunion: Southern Secession Commissioners and the Causes of the Civil War. Virginia: University of Virginia Press, 2001 Read More
Share:
Tags
Cite this document
(“Civil war and reconstruction Term Paper Example | Topics and Well Written Essays - 500 words”, n.d.)
Civil war and reconstruction Term Paper Example | Topics and Well Written Essays - 500 words. Retrieved from https://studentshare.org/history/1606012-civil-war-and-reconstruction

CHECK THESE SAMPLES OF Civil war and reconstruction

As it is popularly known in this time, the name Mark Twa...
12 Pages(3000 words)Book Report/Review

...2) Evaluate Samuel Huntington’s idea of the ‘clash of civilizations,’ and Edward Said’s concept of ‘Orientalism.’ Samuel Huntington in his article onclash of civilizations purports that ‘world politics is entering a new phase’; for him, the source of conflict in the new world is neither primarily ideological nor primarily economic. He believes that new pattern of conflicts of global politics in the new era will be based on the difference in various civilizations among the world nations and that “the clash of civilizations will dominate global politics” (Huntington 159). Huntington argues how the conflict among princes and nations gave way to the conflict of ideologies during and after the world wars. For him, the various civilizations...
10 Pages(2500 words)Assignment
sponsored ads
Save Your Time for More Important Things
Let us write or edit the term paper on your topic "Civil war and reconstruction" with a personal 20% discount.
GRAB THE BEST PAPER

Let us find you another Term Paper on topic Civil war and reconstruction for FREE!