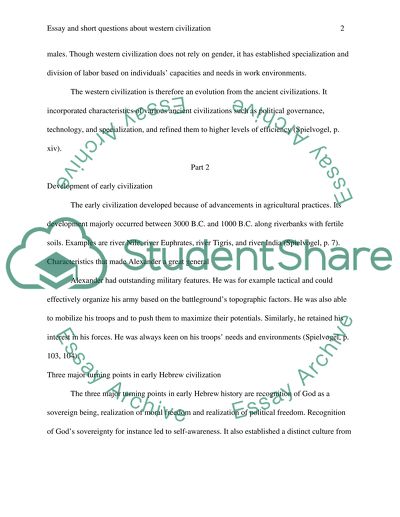 “Essay and Short Questions about Western Civilization - 1”, n.d. https://studentshare.org/history/1605083-essay-and-short-questions-about-western-civilization.
Comments (0)
Click to create a comment or rate a document

CHECK THESE SAMPLES OF Western Civilizations

... there was no strong religious caste that exerted considerable political power. It seems to be an exception in this case. In both Mesopotamia and the Indus Valley civilizations, there existed a clergy that wielded tremendous political power, similar to the papacy in the old Western civilization and also very similar to Islam today where politics and religion are one. The Epic of Gilgamesh is one of the earliest of all human literary works, which came from this part of the world. This work tells us the story of two noble half-brothers; both of them were related to the concepts of something between gods and men. This story of great battles and the burden of kingship in an uncertain world of natural disasters and unpredictable divine... ?Dario...
15 Pages(3750 words)Essay

...?Sur Lecturer Western Civilizations History The letter that President Roosevelt received from Albert Einstein laid down important details about the possibility of creating bomb when uranium element had undergone nuclear fission and went further ahead to emit energy and a great deal of it. Einstein explained the probability of sustained nuclear reaction which could have been made with the end result being a possible powerful bomb. Einstein went ahead to explain that these bombs, after their manufacture and when they are ready for use could be transported by ships even with a remote possibility that they could possibly be transported by planes. From the same understanding, Einstein made it clear that it was...
6 Pages(1500 words)Research Paper

...Review of Documents The two documents reviewed in this work both deal with the historical period that followed the decline of the Roman Empire and the two civilizations that followed – the Western and Byzantine civilizations, that evolved in the former Western and eastern Roman Empires. The Western civilization comprised the barbarians like the Anglo-Saxons and the Franks among others who took over the western regions and adopted much of the Roman culture which they admired, using Latin side by side with their tribal languages. The basic principles of Roman law were also adopted by this civilization which resulted in the primarily Catholic religion among these people. The eastern part of the Roman Empire achieved greatness... as the...
3 Pages(750 words)Essay

...The new idea that I encountered concerning the Judeo-Christian religion tradition is the similarity of the value system between the two religions. The Christian Old Testament is the Jewish Torah. In my background, I had always assumed that the Jewish and Christian religion could not get along, but this is not true. I have found that Christianity is just an extension of Judaism. Islam is also an extension of Judaism. If more similarities were pointed out between the religions maybe an interfaith peace could be achieved. The anti-Semitism in Europe and even in America made me believe that Judaism and Christianity were opposite religions. However upon second thought it makes sense that the two religions are similar. Both have... new idea that I ...
1 Pages(250 words)Essay

...to war so that the church would guard them. In addition, Christians thought that by going to war to recapture Jerusalem, they would claim wealth that they thought existed in the city of Jerusalem. The Byzantine emperor appealed to the papacy and western Christendom to come to rescue of Constantinople by staging a revolt or crusade that would free the city of Jerusalem from the Muslims. In addition, Christians saw the need to fight for their freedom after the destruction of many Christian sacred sites and the torture of Christians under the leadership of Fatimid Caliph Al-Hakim (Pomeranz et al, 2010). The notion of holy war against the Muslims was acceptable to Christians, as they knew it could lead to emergency of...
5 Pages(1250 words)Essay

...DRAFT How do you explain the actions of Hitler and Mussolini and Tojo throughout the 1930s and the reactions of the western democracies to those actions? What lessons might the western democracies have learned because of the 1930s and their reactions to aggression? Democracy is a form of government that allows all eligible citizens equal opportunities in making social, economic and political decisions affecting their lives. Democracy allows eligible citizens equal participation by electing their preferred representatives in planning, development and creation of laws of their land. Dictatorship is the opposite of the democracy, where the citizens are not allowed any freedoms. Hitler was a German leader...
2 Pages(500 words)Research Paper

A cold day in paradise summary from 1-56

2 Pages(500 words)Book Report/Review
sponsored ads
Save Your Time for More Important Things
Let us write or edit the essay on your topic "Western Civilizations" with a personal 20% discount.
GRAB THE BEST PAPER

Let us find you another Essay on topic Western Civilizations for FREE!