Comments (0)
Add to wishlistDelete from wishlist
Cite this document
Summary
Though issues such as the end of slavery, the place of the freed in the South and bringing back the states as one were raging on, the then president was determined to restore the…
Download full paperFile format: .doc, available for editing
HIDE THIS PAPERGRAB THE BEST PAPER97.3% of users find it useful 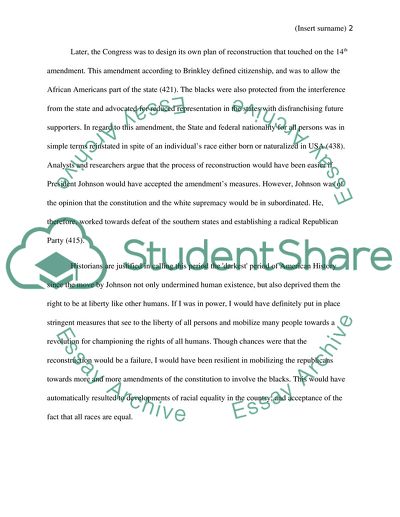 The New South and Reconstruction The reconstruction of the New South would be termed as a major landmark in the historyof America. Though issues such as the end of slavery, the place of the freed in the South and bringing back the states as one were raging on, the then president was determined to restore the states. This, according to Brinkley was met with diverse views by varying politicians in the Congress (435). The Congress and the then president, Lincoln conflicted in their thoughts regarding race, political beliefs and the union. With the Congress taking over, the reconstruction process began in 1877.
Presidents Lincoln and Johnson were of varying opinions that the war was to restore the stateliness of the mess up states. Due to the challenges faced in this process, Lincoln employed the military to not only reconquer the states, but also to regain the status of these states. The treacherous citizens were pardoned in that case, and Lincoln made voters take the oath of Liberation Proclamation (445). Andrew Johnson, an ex- slave possessor was of a low opinion on the blacks and that they should hold the low positions in the society. In this case, Johnson planned to restore the South by proclaiming reprieve on certain classes in the society, those of high class (444). Nothing much maturated from the 13th amendment on abolishing slave trade.
Later, the Congress was to design its own plan of reconstruction that touched on the 14th amendment. This amendment according to Brinkley defined citizenship, and was to allow the African Americans part of the state (421). The blacks were also protected from the interference from the state and advocated for reduced representation in the states with disfranchising future supporters. In regard to this amendment, the State and federal nationality for all persons was in simple terms reinstated in spite of an individual’s race either born or naturalized in USA (438). Analysts and researchers argue that the process of reconstruction would have been easier if President Johnson would have accepted the amendment’s measures. However, Johnson was of the opinion that the constitution and the white supremacy would be in subordinated. He, therefore, worked towards defeat of the southern states and establishing a radical Republican Party (415).
Historians are justified in calling this period the darkest period of American History since the move by Johnson not only undermined human existence, but also deprived them the right to be at liberty like other humans. If I was in power, I would have definitely put in place stringent measures that see to the liberty of all persons and mobilize many people towards a revolution for championing the rights of all humans. Though chances were that the reconstruction would be a failure, I would have been resilient in mobilizing the republicans towards more and more amendments of the constitution to involve the blacks. This would have automatically resulted to developments of racial equality in the country, and acceptance of the fact that all races are equal.
Work cited
Brinkley, Alan. American History, Connecting with the Past, Volume II. New York: McGraw Hill. 2011. Print. Read More
Share:
Tags
Cite this document
(“TEXTBOOK-Brinkley, American History, Connecting with the Past, Volume Essay - 2”, n.d.)
TEXTBOOK-Brinkley, American History, Connecting with the Past, Volume Essay - 2. Retrieved from https://studentshare.org/history/1602946-textbook-brinkley-american-history-connecting-with-the-past-volume-ii-mcgraw-hill-chapter-15

“TEXTBOOK-Brinkley, American History, Connecting With the Past, Volume Essay - 2”, n.d. https://studentshare.org/history/1602946-textbook-brinkley-american-history-connecting-with-the-past-volume-ii-mcgraw-hill-chapter-15.
Comments (0)
Click to create a comment or rate a document

CHECK THESE SAMPLES OF TEXTBOOK-Brinkley, American History, Connecting with the Past, Volume II, McGraw Hill CHAPTER 15

...industries and even products in manufacturing units however the most important thing was looking after the well being of each of the workers. Barons tried to maximize their profits and the country’s infrastructure boomed at the time paving the way for a public private ownership. Entrepreneurship has been a live aspect of American society since such an early time; from Coco Chanel to Andrew Carnegie and J.P Morgan, the foundations of American clothing, finance and education, to name a few, have been booming ever since. These events led up to some of the most important events in the history of American culture and have made the people and the nation what it is today. Works...
5 Pages(1250 words)Essay

..., restoring the prosperity that existed before the onset of the depression. In spite of the fact that not all of them were out rightly successful, the various programs that defined the New Deal contributed to the gradual and eventual recovery of the American economy (Brinkley, 632) Work cited Brinkley, A. (2012). American history: connecting with the past (14th ed.). Boston: McGraw- Hill Higher Education.... by Roosevelt in 1934 to restore the economy constituted the New Deal (Brinkley, 629). Immediately after assuming office, FDR closed all banks nationwide, and the Emergency Banking act was passed, giving the government a chance to inspect the banks’ heath. Congress formed the Federal Deposit Insurance Corporation (FDIC)...
4 Pages(1000 words)Essay

Antidepressants, Antipsychotics, and Other Biomedical Therapies

...American History II American History II The American System was a mercantilist financial plan that played a leading role in the American policy in the first half of the 19th century. A strategy to unify and strengthen America, the American System, was created by a number of leading politicians and the Democratic-Republican Party (Kaufman, 1998). The system was a fresh form of federalism, which comprised of a high tariff of securing the American industries. Derived from the “American School”, the plan incorporated three elements of the...
1 Pages(250 words)Essay

...-being: Roosevelt fought for the right of consumers and mine workers while Wilson focused in reducing tariffs that were unfavorable to the public and businesses. Consequently, both presidents showed a high level of collaboration with congress through consultations leading to implementation of several legislative initiatives (Alan 2011, pg.646). Work Cited Brinkley, Alan. "Chapter 20-21." American History: Connecting with the Past. McGraw Hill: Columbia University, 2011. 515-675. Print.... Introduction The progressivism was introduced in the American society by two famous American presidents (Roosevelt and Wilson) as a tool to foster change in the American Society. During this period, America...
4 Pages(1000 words)Essay

... American war prisoners and killed innocent citizens. However, this decision received a lot of criticism owing to the fact that Japan was gradually pulling out of the war. Moreover, the attack of Hiroshima and Nagasaki were also condemned by various leaders who argued that it was unethical to attack innocent civilians (Brinkley 701). Work Cited Allan, Brinkley. American history: connecting with the past (14th ed.). Boston: McGraw- Hill Higher Education., 2012. Print.... World War II Events that Led to World War II The major events that led to the occurrence of World War II were majorly ascribed to the tensions that occurred between different nations. Additionally, unresolved matters of the...
4 Pages(1000 words)Essay

Why Are Cosmetics So Attractive to Adolescent Girls

5 Pages(1250 words)Speech or Presentation
sponsored ads
Save Your Time for More Important Things
Let us write or edit the essay on your topic "TEXTBOOK-Brinkley, American History, Connecting with the Past, Volume II, McGraw Hill CHAPTER 15" with a personal 20% discount.
GRAB THE BEST PAPER

Let us find you another Essay on topic TEXTBOOK-Brinkley, American History, Connecting with the Past, Volume II, McGraw Hill CHAPTER 15 for FREE!