Comments (0)
Add to wishlistDelete from wishlist
Cite this document
Summary
According to Nikongo, this was during the colonial period where European countries struggled to lay hands on any piece of resourceful continents…
Download full paperFile format: .doc, available for editing
HIDE THIS PAPERGRAB THE BEST PAPER98.6% of users find it useful 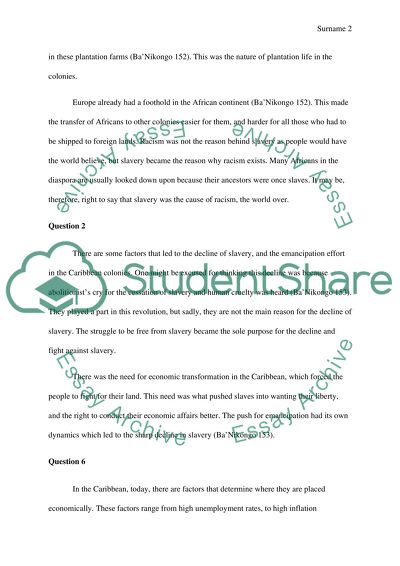 Reaction Paper to Ba’Nikongo: Caribbean Emancipation Synopsis Many continents in the world, today, have their sociocultural and political fronts structured as their colonial masters designed them. According to Nikongo, this was during the colonial period where European countries struggled to lay hands on any piece of resourceful continents they could find. This struggle led to the changing of the structure of these continents and the people in them altogether. During this period, many changes took place that changed the course of many lives. The effects are still felt to this present day. Race relations were affected during that period which led to the different treatment of people in present day. This paper will examine some of the events that led to what is usually seen today in most areas, in the world.
Question 1
In the Caribbean, there was the presence of labour. However, the plantation owners needed labour that was economically friendly to them at the time. They, therefore, opted to ship Africans from Africa to work in their plantation farms. In the colonies, labour was available. The only problem that existed with this labour was that, it needed extra capital to employ in the fields. Africans shipped to the Caribbean as human cargo were treated cruelly in these plantation farms (Ba’Nikongo 152). This was the nature of plantation life in the colonies.
Europe already had a foothold in the African continent (Ba’Nikongo 152). This made the transfer of Africans to other colonies easier for them, and harder for all those who had to be shipped to foreign lands. Racism was not the reason behind slavery as people would have the world believe, but slavery became the reason why racism exists. Many Africans in the diaspora are usually looked down upon because their ancestors were once slaves. It may be, therefore, right to say that slavery was the cause of racism, the world over.
Question 2
There are some factors that led to the decline of slavery, and the emancipation effort in the Caribbean colonies. One might be excused for thinking this decline was because abolitionist’s cry for the cessation of slavery and human cruelty was heard (Ba’Nikongo 153). They played a part in this revolution, but sadly, they are not the main reason for the decline of slavery. The struggle to be free from slavery became the sole purpose for the decline and fight against slavery.
There was the need for economic transformation in the Caribbean, which forced the people to fight for their land. This need was what pushed slaves into wanting their liberty, and the right to conduct their economic affairs better. The push for emancipation had its own dynamics which led to the sharp decline in slavery (Ba’Nikongo 153).
Question 6
In the Caribbean, today, there are factors that determine where they are placed economically. These factors range from high unemployment rates, to high inflation (Ba’Nikongo 159). These factors make the growth and development of Caribbean economies hard to rise. They are solely dependent on European economies such that, if the economic market in Europe and North America take a dip, they also take a dip. The Caribbean Islands owe large debts to the other developed nations (Ba’Nikongo 159). This makes it harder for them to mature and advance, while quietly paying up debt.
In conclusion, in order to have an in-depth knowledge of the situation facing the Caribbean Islands, it is best to start from the beginning. Like many developing continents, the right to enjoy the privileges, found in a continent’s resources, was taken from them by colonialists. They, therefore, have to start from scratch in order to fit into the global market. It may take time, but the Caribbean Islands will rise, as will many other developing continents.

CHECK THESE SAMPLES OF Reaction Paper to Ba'Nikongo: Caribbean Emancipation

...? Reaction to the lecture: Dr. Michael Brown’s illuminating lecture on new explorations in the outer solar system has really captured my imagination.His interesting and humor-filled account of the discovery of ‘Eris’ – a planet-like object orbiting the sun in an extremely elliptical pattern – has been a pleasure to listen to. In the lecture, Brown talks of how Eris is a conundrum to astronomers, for it displays characteristics of both a planet and an asteroid. Similar in size to that of Pluto, possessing a proper spherical shape and majorly comprised of rock, it qualifies to be a planet. On the other hand, its placement within the Kyper belt makes it part of other debris floating in this space. Its long distance away from Sun... Reaction to...
2 Pages(500 words)Essay

...Reaction Paper on Two Films Roll of Thunder, Hear My Cry For a very long time now, several people have tried to struggle and fight against discrimination. Roll of Thunder, Hear My Cry by Mildred Taylor is a very good example of a film that deals with this topic. The setting of the story is in the mid-part, but the film was done at the latter part, of the past century. From the time of the books’ setting to the time they were written, prejudice existed. In fact, if I let myself be so keen in observing, I would definitely feel that it still occurs in unpardonable amounts to this day. Throughout the film, there are several events where the characters are shown to suffer or endure discrimination. The author...
3 Pages(750 words)Essay

...Reaction Paper to Article: 'White House Upbeat About Economic Growth Summary: Government forecasts, issued in June 2006, predicted that economic growth was sound and would increase, and that unemployment figures would drop during the year. These figures were better than previous forecasts, where the GDP had been estimated at 3.4 percent; the figure was now 3.6. This happened, despite a rise in energy prices and was .4percent higher than 2005. Predictions for 2007 and 2008 were 3.3 percent and 3.2 percent growth respectively. The unemployment figures, 5.1 percent at the end of 2005, were expected to drop to 4.7 percent, better than the 5.0 percent originally forecast, but a rise to 4.8 percent was...
2 Pages(500 words)Essay

...Your Full Your 23 November Buried Alive Isabel Allende’s And of Clay are We Created, is a story about a reporter, Rolf Carlé, who goes to cover a story about a volcanic eruption, and ends up staying with a trapped girl, Azucena. Despite his pleas, and those of his partner, the narrator, a pump, needed to empty out the water and help release the girl, never arrives. Carlé stays with the girl for three days, telling her stories about his feats as a photographer. The girl eventually dies; however, Carlé is forced to face his past demons which he had buried deep where he could not be reminded of them. In essence, his memories were also buried alive within him, as Azucena was in the rubble. The first night, Carlé “kept talking... Full Your 23...
2 Pages(500 words)Assignment

... descent known as Arthur A. Schomburg who collected various books, documents and essays on the history of African people. The other notable individuals included Willis Huggins and John G. Jackson who wrote a number of books on African history. On the other hand, the organizations which focused on the history of Africans included Harlem history Club and the African Students Union both of which attempted to define African people before the advent of slavery. The works of these individuals and organizations were significant because they provided the missing links in the history of African people. Works Cited Ba’ Nikongo, Nikongo “The Caribbean: From Emancipation to Independence,” African Studies, 6.1 (2010): 151-162.Print... work place...
1 Pages(250 words)Essay

...Reaction on Reconstruction 1863-1877 Introduction Slavery had become a common aspect in many southern s with African Americans subjected to oppressive labor. President Abraham Johnson sought to establish the reaction of the southern states in 1865 after the emancipation efforts. Therefore, he commissioned Carl Schurz to move to the southern states and compile a report on how the states were fairing after the emancipation. He also needed the views of Southerners towards African Americans. Additionally, the report constituted reports on whether they had started to rebuild their local governments. Worth noting is the fact that the Southern States had practiced slavery for...
2 Pages(500 words)Essay
sponsored ads
Save Your Time for More Important Things
Let us write or edit the essay on your topic "Reaction Paper to Ba'Nikongo: Caribbean Emancipation" with a personal 20% discount.
GRAB THE BEST PAPER

Let us find you another Essay on topic Reaction Paper to Ba'Nikongo: Caribbean Emancipation for FREE!