Comments (0)
Add to wishlistDelete from wishlist
Cite this document
Summary
The late 18th century world as a precursor of enlightenment envisaged an alteration the aftermath of which included a series of revolutions across the Atlantic Ocean, namely the American and the French revolution. The two revolutions can be said to be similar in certain aspects,…
Download full paperFile format: .doc, available for editing
HIDE THIS PAPERGRAB THE BEST PAPER96.4% of users find it useful 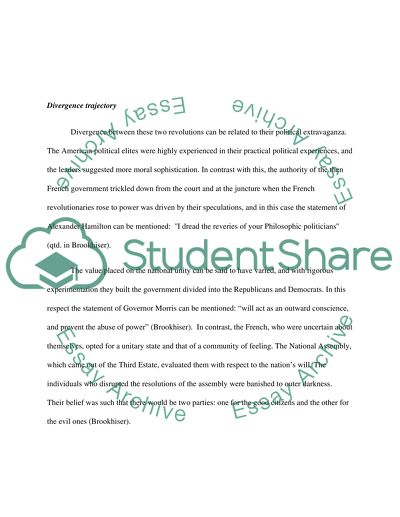 Comparison and contrast between the American and the French Revolution The late 18th century world as a precursor of enlightenment envisaged an alteration the aftermath of which included a series of revolutions across the Atlantic Ocean, namely the American and the French revolution. The two revolutions can be said to be similar in certain aspects, but they can also be judged as dissimilar with respect to their leadership dynamics and their outcome. Analogousness amongst them can be said to be related to their objectives – the attainment of rights to liberty, property and freedom.
Eliminating the preexisting traits
The seeds of radicalism can be said to have been embedded within the American Revolution. America aimed at the reconstitution of society by means of eradicating the existent monarchial society and its basics, which included the robust aspects of kinship, patriarchy, patronage, domination and so on. The eradication was to be accompanied by the substitution of the eradicated aspects with the elements of love, respect, consent, and equality. The dynamic target set by the American Revolution was the establishment of a moral government whose spillover effects would seep around the globe. The primal task of Americans was to introduce the idea of equality with respect to labor. In this respect the statement of Woods bears special significance, and it can be referred to as follows: “Perhaps nothing separated early-nineteenth-century Americans more from Europeans than their attitude toward labor and their egalitarian sense that everyone must participate in it” (qtd. in Launius).
Divergence trajectory
Divergence between these two revolutions can be related to their political extravaganza. The American political elites were highly experienced in their practical political experiences, and the leaders suggested more moral sophistication. In contrast with this, the authority of the then French government trickled down from the court and at the juncture when the French revolutionaries rose to power was driven by their speculations, and in this case the statement of Alexander Hamilton can be mentioned: I dread the reveries of your Philosophic politicians (qtd. in Brookhiser).
The value placed on the national unity can be said to have varied, and with rigorous experimentation they built the government divided into the Republicans and Democrats. In this respect the statement of Governor Morris can be mentioned: “will act as an outward conscience, and prevent the abuse of power” (Brookhiser). In contrast, the French, who were uncertain about themselves, opted for a unitary state and that of a community of feeling. The National Assembly, which came out of the Third Estate, evaluated them with respect to the nation’s will. The individuals who disrupted the resolutions of the assembly were banished to outer darkness. Their belief was such that there would be two parties: one for the good citizens and the other for the evil ones (Brookhiser).
In the American Revolution, moral sophistication was propounded by the chief thinkers. George Washington emphasized the dressing in a gentleman’s stature as it will inject a habit in the young men – a habit of behaving in a proper and adequate manner. In contrast, authenticity was rooted within the French revolution with simplicity of the soul, which resulted in the suffering of the French literature at that time (Brookhiser).
The Americans were comparatively wealthier than French people and took resort of the policy of modesty after the revolution. But the French were not wealthy, and vigorous bloodshed was encountered in comparison with minimal bloodshed in America with the establishment of a democratic government. In the Spanish ship Amistad, the slaves were killed brutally by the French, but when they revolted they came to America, where they were arrested and legally tried with every effort made by the jury to save them. It can be said that the French revolution was more liberal than the American Revolution (Brookhiser).

CHECK THESE SAMPLES OF History 3

...? Custine’s Assessment of Russia CUSTINE’S ASSESSMENT OF RUSSIA French envoy Marquis de Custine published famous letters during a trip to Russia in 1839, when Tsar Nicholas I was ruler. For political and personal reasons, Custine completes his work in a very bitter manner. The Marquis begins his journey by underlining the peculiarity and grandeur of the Russian empire during the 1830s. Among the French philosophers and intellectuals, Russia was very popular during the 18th century. This can be explained by the Empress Catherine the Great who accepted the enlightenment and knew how to deal with it. At some point in her reign, she accepted foreign influence into her court. Products were imported from Europe during her reign. Even... Custine’s...
3 Pages(750 words)Essay

...slaves before they were readmitted to the Union. Following the Reconstruction Act the Blacks acquired a say in the government regulations which was a remarkable step in the history of the American politics. Years later, however, counterrevolutionary players including the Ku Klux Klan would cause reversal of the legislations brought about by the Radical Republicans thereby spurring up hostility and white supremacy in the Southern States (Public Broadcasting Service a, n.pag.). The 1925 film The Birth of a Nation illustrated the same era of the Southern states after the American Civil War. The film distorted the reality of the Reconstruction period by showing the Blacks as dominating the Whites in the South thereby...
5 Pages(1250 words)Essay

...US History: Cultural Activities in the Progressive Era and the New Deal Era. The Progressive Era and the New Deal Era in American history are known for their paradoxical links and digressions among social, political, economic and cultural aspects. While the Progressive Era was apparently brimming with hope infested by the Modernist endeavor, the New Deal Era had to deal with the harsh realities of the stock exchange crash with which it started and the catastrophic impact of the conflicts in the international front. The socio-political ambience of both the periods were also linked their cultural means of production and distribution. “…Americans of the twenties sought to adapt to the rise of a new mass...
4 Pages(1000 words)Essay

.... Witchcraft and puritanical values dominated the social fabric of North America in the middle 17th century. The mixed cultural values of the various European settlers, is the highlight of the northern colony. Answer 3 Women through the ages have been perceived as inferior to men. In the early colonial America the dominant patriarchal society did not allow many rights to women. Maternity was regarded as the major social role for them. The girls were expected to follow their mother and learn cooking, cleaning and taking care of children. Education was not a priority area for the fair sex. In the early 16th century, the church was a powerful institution and did not seem to give any prominent role to women barring the...
6 Pages(1500 words)Essay

...organization of the society. Conclusion: Stages of history depict progress in society, however this may not be referred to as progress in that the modern world is characterized by factors that do not make it ideal, this include alimentation in the modern world, rationality that results into a scenario referred to as Weber as the lion cage of rationality whereby people are imprisoned are unable to get out. Durkheim also criticizes the modern world as characterized by the rise in organics solidarity and the decline in collective consciousness; therefore we cannot refer the modern world as ideal. (Giddens 17) 3. Rationalization and bureaucracy: Introduction: Rationalization refers to the attempt to...
6 Pages(1500 words)Essay

...Asian History al affiliation Asian History Question The floating world commonly referred by the Japanese as the Ukiyo describes the lifestyle of the people in the cities of Edo (now Tokyo), Osaka and Kyoto. During this period, 1615 to 1868 there was a significant increase in the number of the wealthiest merchants in those cities. These people lived a meaningless pleasure seeking life. These merchants were barred from assuming political office and as a result, they decided to come together and kill the boredom. They came together and enjoyed, musical performances, poetry, theater performances, sexual activities, tea parties, painting and calligraphy. Despite enjoying all these earthly pleasures, the...
2 Pages(500 words)Essay

...Phase 3: The “Oval Table with Falling Leaves” Given that it comes in many shapes and sizes, the oval table with falling leaves was created in the 17th century colonial America. There were oval tables that had multiple legs made from black walnut and white pines, others were made from black walnut, hard maple and white and yellow pine for drawers on the side. All of these tables can be found at the Metropolitan Museum of art, with different accession and gallery numbers. In this paper, I will focus on the oval table with falling leaves, from the Metropolitan Museum, made in 1909. This oval table dates back to the period between 1715 and 1740, created by using soft maple and Pine. Its accession number is 10.125.130, can be...
2 Pages(500 words)Essay

...16/10 19th Century Part s 19th century architecture history 19th-century architecture was significantly ive to prior architectural activities and foreign, striking styles, which were modified to the new technologies of the early modern age. Revivals of Gothic, Greek, and Renaissance plans were fused with fashionable engineering methods and equipment. In Europe, Historicism idealized past realms and acculturations, where they used motifs stirred by them to inspire national reminiscence. Two characteristics emerged in the century’s architectural design. First the need to incorporate the traditional styles with the emerging societies brought by industrialization, hence the old styles were incorporated to stamp authority in...
20 Pages(5000 words)Book Report/Review

High Failure Rates of New Products in the Market

2 Pages(500 words)Article
sponsored ads
Save Your Time for More Important Things
Let us write or edit the essay on your topic "History 3" with a personal 20% discount.
GRAB THE BEST PAPER

Let us find you another Essay on topic History 3 for FREE!