Comments (0)
Add to wishlistDelete from wishlist
Cite this document
Summary
The writer presents a reaction paper to Clarke’s "The Influence of Arthur Schomburg on My Concept of Africana Studies". According to Schomburg, in order to understand the African American culture, it is vital to understand the origin of African oppressors first…
Download full paperFile format: .doc, available for editing
HIDE THIS PAPERGRAB THE BEST PAPER94.5% of users find it useful 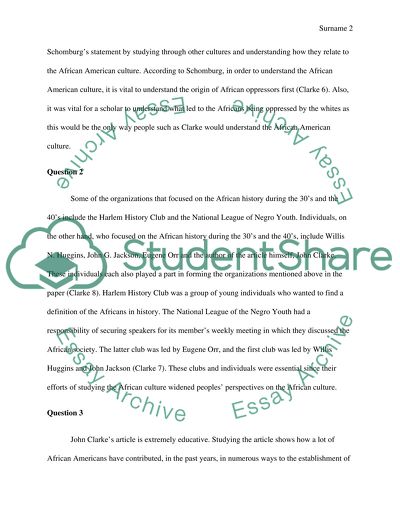 ﻿Reaction Paper to Clarke’s the Influence of Arthur A. Schomburg on My Concept of Africana Studies
Synopsis
The article by John Clarke talks about the influence of Arthur A. Schomburg with regards to John Clarke’s view and knowledge of African history. Arthur, in the article, is presented as the antecedent of the African American Studies Revolution as well as one of the ideological fathers of this age bracket of scholars.
Question 1
The author relates to how Schomburg says that scholars should approach the study of African history in various ways. First and foremost, John Clarke turns out to be a teacher due to the influence of Arthur A. Schomburg (Clarke 4). John quotes that Arthur was the person who influenced him in setting the establishment of his career as an educator, as a Socialist and a Pan Africanist. According to John Clarke, Arthur A. Schomburg was responsible for influencing him to become an individual who sees no problem in being a Pan-Africanist and a Socialist at the same time and an African World Nationalist at an early age of his life. Also, Clarke relates to Schomburg’s statement by studying through other cultures and understanding how they relate to the African American culture. According to Schomburg, in order to understand the African American culture, it is vital to understand the origin of African oppressors first (Clarke 6). Also, it was vital for a scholar to understand what led to the Africans being oppressed by the whites as this would be the only way people such as Clarke would understand the African American culture.
Question 2
Some of the organizations that focused on the African history during the 30’s and the 40’s include the Harlem History Club and the National League of Negro Youth. Individuals, on the other hand, who focused on the African history during the 30’s and the 40’s, include Willis N. Huggins, John G. Jackson, Eugene Orr and the author of the article himself, John Clarke. These individuals each also played a part in forming the organizations mentioned above in the paper (Clarke 8). Harlem History Club was a group of young individuals who wanted to find a definition of the Africans in history. The National League of the Negro Youth had a responsibility of securing speakers for its member’s weekly meeting in which they discussed the African society. The latter club was led by Eugene Orr, and the first club was led by Willis Huggins and John Jackson (Clarke 7). These clubs and individuals were essential since their efforts of studying the African culture widened peoples’ perspectives on the African culture.
Question 3
John Clarke’s article is extremely educative. Studying the article shows how a lot of African Americans have contributed, in the past years, in numerous ways to the establishment of Africanism, including the contributions that are unheard of or go unnoticed. Schomburg’s statement, “remake their past to shape their future” means that Africans need first to understand the world’s history so as to understand the basis of their suffering with an aim of improving their future. The statement means that Africans need study the account of their oppressors so as to understand how to improve the Africans future (Clarke 6).
Work Cited
Clarke, John. The Influence of Arthur A. Schomburg on My Concept of Africana Studies. Phylon 49(1) (1992): 4-9. Print. Read More
Share:
Tags
Cite this document
(“Clarkes the Influence of Arthur Schomburg on My Concept of Africana Essay”, n.d.)
Clarkes the Influence of Arthur Schomburg on My Concept of Africana Essay. Retrieved from https://studentshare.org/history/1602180-reaction-paper-to-clarkes-the-influence-of-arthur-a-schomburg-on-my-concept-of-africana-studies

“Clarkes the Influence of Arthur Schomburg on My Concept of Africana Essay”, n.d. https://studentshare.org/history/1602180-reaction-paper-to-clarkes-the-influence-of-arthur-a-schomburg-on-my-concept-of-africana-studies.
Comments (0)
Click to create a comment or rate a document

... only four performances. This early setback almost discouraged Miller from writing completely, but he gave himself one more try. Three years later, All My Sons won the New York Drama Critics' Circle Award as the best play of 1947, launching Miller into theatrical stardom. All My Sons, a drama about a manufacturer of faulty war materials, was strongly influenced by the naturalist drama of Henrik Ibsen. Along with Death of a Salesman (his most enduring success), All My Sons and The Man Who Had All the Luck form a thematic trilogy of plays about love triangles involving fathers and sons. The drama of the family is at the core of all of Miller's major plays, but nowhere is it more prominent than in the realism of All My Sons... but angry at the...
6 Pages(1500 words)Research Paper

...﻿ Historic Event / Individual or Issue Related to Africana Studies Similar to the arts of all individuals in the world, African art illustrate thought, attitudes, and values which are a result of African experiences in the past. Therefore, the study of African art gives an avenue for learning about the history of Africa. Through the study of African Art, individuals can find answers to the questions which have been engrossing the continent for long. Nonetheless, it is not only African art that can assist people get information on the past of Africa. Other elements, for example, lifestyle and stage of African development can also assist people gain additional information on the status of Africa in the globe. As individuals search... ...
4 Pages(1000 words)Essay

The Influence of My Life

...Tiffanie Blackshire The Influence of My Life Fortunately, there have been several people who have crossed my path and have left, an enduring and deep impression on my life. Those people include my mother, grandmother, Mrs. Eckert from my elementary school, my physician Dr. Cain and finally my favorite person from history, Jackie Kennedy Onassis. These people, each in their own way, taught me to seek the positive in life and to learn from every experience, large or small. They each heavily influenced my life and cultivated my strong self-motivation and...
2 Pages(500 words)Essay

All My Sons by Arthur Miller

...All My Sons: A Social Definition of Sons The conflicting responsibilities, whether to immediate family or to a more comprehensive social affiliation, permeate Arthur Miller's writing in "All My Sons." These conflicting responsibilities, in turn, are molded by the characters' different political, moral, and economic viewpoints. The reader is invited to participate in the debate and the underlying struggle; more specifically, Miller creates a series of scenes in which loyalty to family and loyalty to a broader notion of a social family are opposed. The play's tension derives from this essential conflict and the climax, Joe Keller's suicide, would appear to be Miller's personal judgment...
4 Pages(1000 words)Essay

...practices related to Enron Corporation. For Arthur Andersen, economizing results from the collaboration of the engineer and the economist to determine the best allocation of scarce resources among competing ends. Economizing is basically concerned with reaching a level of efficiency in the use of resources. It relies on engineering for designing the machines and determining the optimal way to use these machines in order to produce a maximum output within a given physical layout (Moore and Crampton n.d.). Arthur Andersen planning systems is based on four main types of planning: contingency, strategic, tactical and operations planning. Competition is the most important external factor which...
5 Pages(1250 words)Essay

...Schomburg Research Center Visit The Schomburg Center, located in Harlem, is a research library of the New York Public Library. It serves as a repository archive for information about people bearing African origins (Casper 31). This paper will write a brief history of the center and Arturo Schomburg’s relation with it. In 1901, Andrew Carnegie donated five million dollars to construct a library in New York with 65 branches (Casper 33). The library opened its doors in 1905 with 10,000 books. In 1920, Ernestine Rose, the then branch librarian, integrated an all white staff. The first African American, Catherine Latimer, was later hired and cooperated with schools and social organizations...
1 Pages(250 words)Essay

...Introduction to Africana Studies Assignment Question 2 Slavery is the treatment of a human being by another as a property that can be bought and sold. While a lot of evil things have happened in the history of mankind, slavery stands out as the most cruel. It is an issue that evokes intense feelings. The American civil war of 1861-1865 was largely caused by differences over the practice between the northern states (the Union) and the southern states (the confederacy). Resistance to slavery took both overt and covert forms (Winant 82). The first and most effective resistance tool against enslavement is sabotaging production. This could be done through delayed menstrual cycle, breaking tools, feigning...
2 Pages(500 words)Essay

... Factors that contributed to scramble and acquisition of African colonies The scramble for Africa, also known as race for Africa was the invasion, occupation and colonization, and later annexation of Africa by European powers, during the late 19th century. This was marked by the new imperialism period that transpired between 1881 and 1914.This happened due to what the European powers were facing evolution in the field of economics and military and numerous changes in social ways of life. Before the scramble, that is 1880s, only small part of Africa was under European rule. These areas were next to big rivers and coastal regions. Thereafter, the European powers struggled to create a sphere of influence for themselves in Africa... Factors that...
2 Pages(500 words)Essay
sponsored ads
Save Your Time for More Important Things
Let us write or edit the essay on your topic "Clarkes the Influence of Arthur Schomburg on My Concept of Africana Studies" with a personal 20% discount.
GRAB THE BEST PAPER

Let us find you another Essay on topic Clarkes the Influence of Arthur Schomburg on My Concept of Africana Studies for FREE!