Comments (0)
Add to wishlistDelete from wishlist
Cite this document
Summary
The papal visit was eagerly anticipated by Catholics who traveled many miles, in hot weather and immense crowds, to be present when the Pope spoke. The country suffered…
Download full paperFile format: .doc, available for editing
HIDE THIS PAPERGRAB THE BEST PAPER93.6% of users find it useful 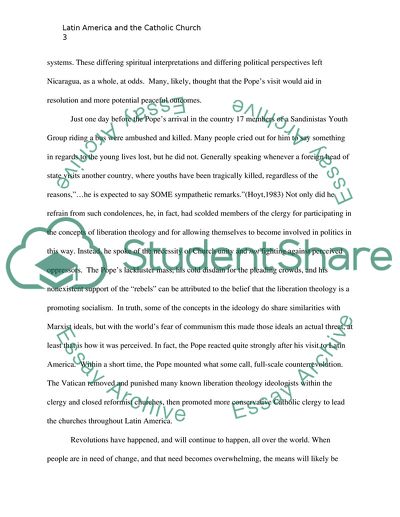 Extract of sample "Latin America and the Catholic Church"

Capitalism, Communism, and Communion Your Due In March 1983 Pope John Paul II visited Nicaragua, where he was to hold Catholic Mass in the city of Managua. The papal visit was eagerly anticipated by Catholics who traveled many miles, in hot weather and immense crowds, to be present when the Pope spoke. The country suffered from great poverty and civil unrest. The impoverished were desperate for the leader of their faith to speak some words of condolence for their lost loved ones, to support the poor in their efforts, and offer some words of peace. Many Catholics in attendance were very disappointed, because the Pope, in truth, did none of those things. At the conclusion of the lackluster oration, a BBC reporter stated, that the Pope gave,”…the most unusual mass of his career.”(qtd in Hoyt,1983) Why were so many Catholics so disappointed? What were the reasons for the Pope’s behaviors? What were the consequences in Nicaragua after the papal visit? These are all issues that will be discussed in the course of this essay.
Nicaragua in the late 1970s and 1980s was a land of revolution. Many citizens felt that their existing leader, Anastasio Somoza Debayle, was a tyrant. They saw the immense poverty, the hunger, the poor living conditions, the lack of employment available was directly related to the exploitation and oppression by their government; that this is the reason the poor suffered without relief. The plight of the poor Christians brought them to the rebel militias formed by the Sandinistas, who opposed Somoza, encouraged rebellion, and promoted the teaching of “liberation theology.”(Dillon,1999) This, sometimes, controversial interpretation of Christianity, relies heavily on the need to care for the poor and heavily rebukes traditional capitalist economic systems. These differing spiritual interpretations and differing political perspectives left Nicaragua, as a whole, at odds. Many, likely, thought that the Pope’s visit would aid in resolution and more potential peaceful outcomes.
Just one day before the Pope’s arrival in the country 17 members of a Sandinistas Youth Group riding a bus were ambushed and killed. Many people cried out for him to say something in regards to the young lives lost, but he did not. Generally speaking whenever a foreign head of state visits another country, where youths have been tragically killed, regardless of the reasons,”…he is expected to say SOME sympathetic remarks.”(Hoyt,1983) Not only did he refrain from such condolences, he, in fact, had scolded members of the clergy for participating in the concepts of liberation theology and for allowing themselves to become involved in politics in this way. Instead, he spoke of the necessity of Church unity and not fighting against perceived oppressors. The Pope’s lackluster mass, his cold disdain for the pleading crowds, and his nonexistent support of the “rebels” can be attributed to the belief that the liberation theology is a promoting socialism. In truth, some of the concepts in the ideology do share similarities with Marxist ideals, but with the world’s fear of communism this made those ideals an actual threat, at least that is how it was perceived. In fact, the Pope reacted quite strongly after his visit to Latin America. Within a short time, the Pope mounted what some call, full-scale counterrevolution. The Vatican removed and punished many known liberation theology ideologists within the clergy and closed reformist churches, then promoted more conservative Catholic clergy to lead the churches throughout Latin America.
Revolutions have happened, and will continue to happen, all over the world. When people are in need of change, and that need becomes overwhelming, the means will likely be found. The Pope spoke of church unity as a solution, but unity should not be used an as excuse to deny change. The Pope’s words, the Vatican’s actions, and the powerful means of wealthier conservative Catholics diminished the rebellion. By the 1990’s the fervor of the Sandinistas had, for the most part, been burnt out. A ban was placed on teaching liberation theology in and its most outspoken Latin American promoters silenced. Many would say that Nicaragua presently is far worse off than it was years ago. The church has withdrawn from activism and no longer involves itself heavily in social issues.(Hogan,2005) There are no guarantees that Nicaragua would have benefitted from liberation theology had the revolution been successful; no promise that it was the ideal solution, but it was a solution. Instead the needs of the people were lost in the games of religion and politics, and that is all too common reality of the world we all live in today.
References
Dillon, S. (1999, January 21). Ecatepec journal, a rebel creed, stifled by the pope, flickers still.
The New York Times. Retrieved from
http://www.nytimes.com/1999/01/21/world/ecatepec-journal-a-rebel-creed-stifled-by-the-pope-flickers-still.html?pagewanted=all&src=pm
Hogan, M. (2005, November 23). Latin america- an historical perspective of the politics of the
catholic church in latin america. Retrieved from http://www.alterinfos.org/spip.php?article103
Hoyt, K. (1983, March). The 1983 visit of john paul II to nicaragua. Retrieved from
http://www.hartford-hwp.com/archives/47/030.html Read More
Share:
Tags
Cite this document
(“Latin America and the Catholic Church Case Study - 2”, n.d.)
Latin America and the Catholic Church Case Study - 2. Retrieved from https://studentshare.org/history/1601616-latin-america-and-the-catholic-church

“Latin America and the Catholic Church Case Study - 2”, n.d. https://studentshare.org/history/1601616-latin-america-and-the-catholic-church.
Comments (0)
Click to create a comment or rate a document

CHECK THESE SAMPLES OF Latin America and the Catholic Church

Latin America and the Catholic Church

...?Running head: Latin America and the Catholic Church Latin America and the Catholic Church Insert Insert Insert 10 June 2011 What did some reform-minded Catholics in Nicaragua hope that the pope might do during his visit to that country? According to Hoyt (1983), when people gathered at Nicaragua to listen to the pope’s speech and thereafter for the mass that would be conducted by the pope, they had hoped that the pope would utter some words of consolation for the bereaved families who had lost their loved one during the recent killings of counter-revolution. A total of 17 members of the...
1 Pages(250 words)Case Study

.... After the Western Roman Empire failure, there were competitions between the Catholic Church and Arianism to convert the Barbarian tribes. In the late 15th century explorers and the European missionaries spread Catholicism in America, Asia and Africa. The Catholic Church had Church fathers. Church fathers were early eminent Christian teachers, bishops and influential theologians. The church fathers faced a number of theological disputes. For, example, Jesus Christ in the Eucharist was a sign of contradiction to the early church fathers. Some people did not believe that the Eucharist was...
4 Pages(1000 words)Research Paper

...Catholic Church: Responses to War and Peace 2009 Catholic Church: Responses to War and Peace Historically, the Catholic religious tradition included two distinct views on the matters of ware and peace: the pacifist or non-violent view and the 'just war' theory. As its name suggests, the pacifist view advocates the maintenance of peace using solely peaceful methods that do not involve any violence. By contrast, the just-war theory justified violence under certain circumstances. These two perspectives on war and peace have a long and exceptionally complex history that covers the period from the Sermon on the Mount to the recent statements of Popes and...
5 Pages(1250 words)Essay

...Within a few short years of the Resurrection, the followers of Jesus began calling themselves "Christians" (Acts 11:26), and by the end of the first century, the word "catholic"-meaning "universal"-was applied to the Church. Catholic religion provides a full-fledged membership with the application of the seven blessed sacraments which marks the life of every Catholic. Catholics become a full fledged member of the People of God, Christ's mystical body, the Church that Jesus Christ built on the Rock, Peter (Mt. 16: 16), and on his successors, the Bishops of Rome. For this purpose of His incarnation Jesus taught man His gospel, suffered...
2 Pages(500 words)Article

...Latin America: Geography and Ecosystem What happened to the ecosystems of the region when the people changed the environment? Where the changes made for the better or for the worse, for the region? Holmer (2008) defines an ecosystem as a term that encompasses the living things in a given natural environment, interacting with not only each other, but also with their non-living things such as atmosphere and soil. The environment in Latin America changed in three ways: subdivision of land, construction of dams and electric plants, and increased mining activities. Thus, the ecosystem changed a lot. So many animals around the areas where the dams were built died. Also, the...
2 Pages(500 words)Essay

... matters from the church. His decision was the best and the most significant solution to the situation at hand- the tension of war. References Bochenski M., (2013). Transforming Faith Communities: A Comparative Study of Radical Christianity in Sixteenth-Century Anabaptism and Late Twentieth-Century Latin America. United States: Wipf and Stock Publishers. Mannion G., (2008). The Vision of John Paul II: Assessing His Though and Influence. United States: Liturgical Press.... The 1983 Visit of Pope John Paul II to Nicaragua Affiliation Introduction Pope John Paul II had a pastoral visit to Nicaragua in March 1983. The visit was amidst the ongoing Contra war. It was the extreme polarization period between Nicaraguan Church...
2 Pages(500 words)Assignment
sponsored ads
Save Your Time for More Important Things
Let us write or edit the case study on your topic "Latin America and the Catholic Church" with a personal 20% discount.
GRAB THE BEST PAPER

Let us find you another Case Study on topic Latin America and the Catholic Church for FREE!