Comments (0)
Add to wishlistDelete from wishlist
Cite this document
Summary
The Geneva Accord of 1954 finally resulted in the culmination of the I Indochina War, and led to the bifurcation of Vietnam, marked by the Democratic Republic of Vietnam with Communist affiliations and the Republic of Vietnam with discernible democratic leanings. The Communist…
Download full paperFile format: .doc, available for editing
HIDE THIS PAPERGRAB THE BEST PAPER93.2% of users find it useful 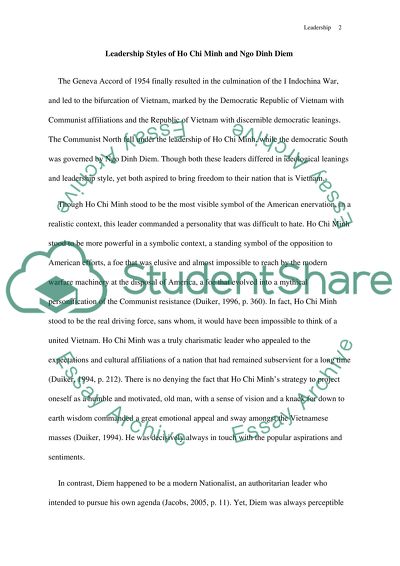 Leadership Styles of Ho Chi Minh and Ngo Dinh Diem of the History and Political Science of the Concerned July 20, Leadership Styles of Ho Chi Minh and Ngo Dinh Diem
The Geneva Accord of 1954 finally resulted in the culmination of the I Indochina War, and led to the bifurcation of Vietnam, marked by the Democratic Republic of Vietnam with Communist affiliations and the Republic of Vietnam with discernible democratic leanings. The Communist North fell under the leadership of Ho Chi Minh, while the democratic South was governed by Ngo Dinh Diem. Though both these leaders differed in ideological leanings and leadership style, yet both aspired to bring freedom to their nation that is Vietnam.
Though Ho Chi Minh stood to be the most visible symbol of the American enervation, in a realistic context, this leader commanded a personality that was difficult to hate. Ho Chi Minh stood to be more powerful in a symbolic context, a standing symbol of the opposition to American efforts, a foe that was elusive and almost impossible to reach by the modern warfare machinery at the disposal of America, a foe that evolved into a mythical personification of the Communist resistance (Duiker, 1996, p. 360). In fact, Ho Chi Minh stood to be the real driving force, sans whom, it would have been impossible to think of a united Vietnam. Ho Chi Minh was a truly charismatic leader who appealed to the expectations and cultural affiliations of a nation that had remained subservient for a long time (Duiker, 1994, p. 212). There is no denying the fact that Ho Chi Minh’s strategy to project oneself as a humble and motivated, old man, with a sense of vision and a knack for down to earth wisdom commanded a great emotional appeal and sway amongst the Vietnamese masses (Duiker, 1994). He was decisively always in touch with the popular aspirations and sentiments.
In contrast, Diem happened to be a modern Nationalist, an authoritarian leader who intended to pursue his own agenda (Jacobs, 2005, p. 11). Yet, Diem was always perceptible of popular aspirations and well understood that his leanings towards an American agenda will project him as a puppet nationalist, subservient to the will of the Americans. So, to achieve his purpose, he devised the strategy of rousing the South Vietnamese peasantry for support, while steadily reducing the nation’s dependence on America (Jacobs, 2005). Though being a competent leader, eventually he ended up being a scapegoat of the American disappointment. Though Diem pursued an authoritarian approach towards leadership, this approach on his part was necessary in the sense that a Western style approach towards leadership would not have gone well in a society that was given to a totalitarian approach towards power (Jacobs, 2005). That is why his death spelled the scattering of all the South Vietnamese war efforts as well as a big jolt to the American policy in Vietnam.
There is no denying the fact that both these leaders that are Ho Chi Minh and Ngo Din Diem were conversant with the socio-political culture of their country and hence improvised their own specific leadership styles, to suit their objectives and vision.
References
Duiker, William J. (1994). The US Containment Policy and the Conflict in Indochina.
Stanford, CA: Stanford University.
Duiker, William J. (1996). The Communist Road to Power in Vietnam. Boulder, CO:
Westview Press.
Jacobs, Seth. (2005). America’s Miracle Man in Vietnam. New York: Duke University Press
Books. Read More
Share:
Tags
Cite this document
(“Leadership Styles of Ho Chi Minh and Ngo Dinh Diem Essay”, n.d.)
Retrieved from https://studentshare.org/history/1600550-leadership-styles-of-ho-chi-minh-and-ngo-dinh-diem

...?Leadership Styles Introduction A key element in the success or failure of an organization is its leadership. Leadership is a crucial in organizational behavior because it has dynamic effects on the individual and organizational interaction (Obiwuru, Okwu, Akpa, and Nwankwere, 2011). The success or failure of these organizations is dependent on the leadership style adopted by all the stakeholders in the company or organization, particularly the top management. This is because the manager is supposed to be aware of the individual and group behavior as well as have the capability to communicate and motivate the employees. Their ability to...
7 Pages(1750 words)Research Paper

Ho Chi Minh: The One Who Led Vietnam toward Independence

...?Jerry Ciacho May 9, Ho Chi Minh: The One Who Led Vietnam Toward Independence The history of Vietnam is among the longest uninterrupted histories in the world and it has had its record of struggles and experiences of hardships and ordeals. Several countries have conquered it, but finally leading Vietnam toward independence was their unconventional hero Ho Chi Minh, called by many as Uncle Ho. He has greatly contributed to the events in the Vietnam War, and ultimately determined the result: Vietnamese independence and liberation. The Vietnam War was among the most famous of the clashes of the Cold War, a war that according...
5 Pages(1250 words)Essay

...? Leadership Styles Leadership Styles Introduction Healthcare organization is one of the growing sectors globally including the United States of America. These organizations serve as one prime source of income for the country, and thus many of them have transformed into giant bodies focusing on profit making more than public health and welfare (Zoubul, 2005). Incident Highlighting Leadership Attention A recent event in our organization that has highlighted a practice that needs to be corrected is of misleading the patient for the sake of profits. A patient was admitted in the hospital, being diagnosed with the symptoms of cancer, was asked to do blood,...
3 Pages(750 words)Term Paper

...College Leadership Styles Leadership may take different forms depending on the personality and strategies used by managers. However, the result and their effectiveness depends more on the approaches used in managing an organization or a team for that matter. Though there are different styles of leadership in organizations, some leaders may use a hybrid approach by integrating two or three leadership approaches while others choose to use the extremes in applying a single management method only. To illustrate the effects of different leadership approaches as used and its success and effectiveness, this report compares...
3 Pages(750 words)Case Study

Vietnamese History in the 20th Century

...as it was internally isolated because of continued cold war. With the helm of President Dwight Eisenhower and John Kennedy, Vietnam was able to make economic policy reforms, that have made it enjoy marked economic growth and reduced political repression, but corruption was still evident. The leadership styles of these leaders were had both effective and ineffective qualities. Independence and War in Vietnam Vietnam was under the rule of France, in the better part of the 20th century. Geneva conference of 1954 left Vietnam divided, with the North being ruled by Ho Chi Minh of communist government and the South being ruled by Ngo...
3 Pages(750 words)Essay

...JOINT INTELLIGENCE Military Sciences March 21, The United s of America has been on the support for war against terrorism and other related activities that destabilize the peace of a given country and economic downturn thus follows. Most of the enemies or the perpetrators and terrorists who conduct such activities have varied reasons for doing such acts. Intelligence activities include all the activities that are aimed at controlling, planning and understanding what the adversaries are planning and then the information obtained should be utilized to counter the activities before they are in operation. United States of America Intelligence departments use various principles that aid them to determine what the adversaries... INTELLIGENCE...
1 Pages(250 words)Assignment

...PLANNING FOR RISK AND RESILIENCE: CASE STUDY Ho Chi Minh Resilience Planning Project Introduction Studies have placed Vietnam as one of the countries that has been greatly affected by climate change. Vietnam has been placed by studies as among the top ten countries ranked in terms of both the total and the actual share of land and population located in low-lying coastal areas below 10m above men seal level (AMSL) (McGranahan, Balk, and Anderson, 2007). Studies carried out to affirm the geographical extensive study on urban flood risk and the vulnerability of port cities confirmed that HCNC is among the top to be affected by flooding (Nicholas et al., 2008a). Background to the...
9 Pages(2250 words)Essay
sponsored ads
Save Your Time for More Important Things
Let us write or edit the essay on your topic "Leadership Styles of Ho Chi Minh and Ngo Dinh Diem" with a personal 20% discount.
GRAB THE BEST PAPER

Let us find you another Essay on topic Leadership Styles of Ho Chi Minh and Ngo Dinh Diem for FREE!