Comments (0)
Add to wishlistDelete from wishlist
Cite this document
Summary
Luthers purpose of writing the “Disputation of Martin Luther on the Power and Efficacy of Indulgence” also known as 95 Theses was to reproach the materialism of the Church ("Martin Luther"). Hillerband said that Luther wrote his 95 Theses not to destroy the Catholic Church…
Download full paperFile format: .doc, available for editing
HIDE THIS PAPERGRAB THE BEST PAPER97.3% of users find it useful 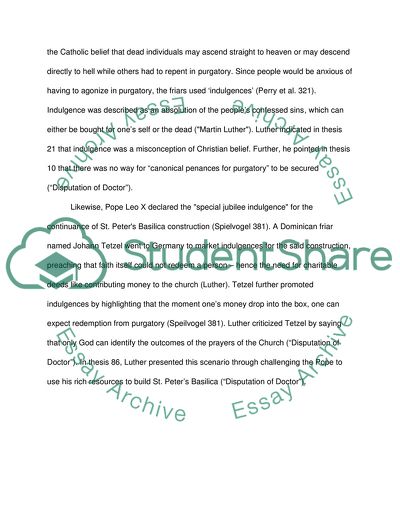 Illustrations of 95 Theses in the Context of Early Church Problems Luthers purpose of writing the “Disputation of Martin Luther on the Power and Efficacy of Indulgence” also known as 95 Theses was to reproach the materialism of the Church ("Martin Luther"). Hillerband said that Luther wrote his 95 Theses not to destroy the Catholic Church but to theoretically contend with Catholic practices and implicitly impose challenges to the church leaders (qtd. in Luther). Luthers writings sprung from his observations of the churchs malpractice of the Bible, which illustrated the selfish ruling of friars during the middle ages.
In most of his thesis statements, Luther compared the true Christian beliefs to the Church practices, especially ‘indulgences’ during his time. It can be observed that most practices contradicted the teachings of the Bible. During those times, the church appeared to be in an insurmountable difficulty as it was filled with leaders whose practices were revolving around low moral standards, profanity, and perversion of beliefs; the church exhausted every Germans money through taxes (Biesinger 20). When he went to Rome in 1510, he observed the unlikely personalities of friars and how they used indulgences for their personal consumption (Bratcher). Church leaders of Europe also lived a wealthy life while neglecting their duties. In addition, churches were designed with unnecessary work of arts and instruments called by Protestants an example of "pagan idolatry" ("Roman Catholic Church").
Another problem Luther pointed out in his 95 Theses was the concept of purgatory and indulgences. Luther highlighted in thesis 17 that purgatory should not be treated as a place of horror but of love (“Disputation of Doctor”). However, friars used the Catholic belief that dead individuals may ascend straight to heaven or may descend directly to hell while others had to repent in purgatory. Since people would be anxious of having to agonize in purgatory, the friars used ‘indulgences’ (Perry et al. 321). Indulgence was described as an absolution of the people’s confessed sins, which can either be bought for one’s self or the dead ("Martin Luther"). Luther indicated in thesis 21 that indulgence was a misconception of Christian belief. Further, he pointed in thesis 10 that there was no way for “canonical penances for purgatory” to be secured (“Disputation of Doctor”).
Likewise, Pope Leo X declared the "special jubilee indulgence" for the continuance of St. Peters Basilica construction (Spielvogel 381). A Dominican friar named Johann Tetzel went to Germany to market indulgences for the said construction, preaching that faith itself could not redeem a person – hence the need for charitable deeds like contributing money to the church (Luther). Tetzel further promoted indulgences by highlighting that the moment one’s money drop into the box, one can expect redemption from purgatory (Speilvogel 381). Luther criticized Tetzel by saying that only God can identify the outcomes of the prayers of the Church (“Disputation of Doctor”). In thesis 86, Luther presented this scenario through challenging the Pope to use his rich resources to build St. Peter’s Basilica (“Disputation of Doctor”).
Works Cited
Biesinger, Joseph. Germany: A Reference Guide from the Renaissance to the Present.
New York: Facts on File, Inc., 2006. Print.
Bratcher, Dennis. Ed. “The 95 Theses of Martin Luther (1517)”. The Voice. Christian
Resource Institute. 11 Nov. 2011. Web. 11 July 2012.
.
“Disputation of Doctor Martin Luther on the Power and Efficacy of Indulgences.”
www.iclnet.org. Internet Christian Library. n.d. Web. 11 July 2012. .
Luther, Martin. The Ninety-Five Theses on the Power and Efficacy of Indulgences (95
Theses). Boston: MobileReference, 2010. Print.
"Martin Luther." Theopedia. Christian Web Foundation. 2010. Web. 11 July 2012.
.
Perry, Marvin, et. al. Western Civilization: Ideas, Politics, and Society. 10 ed. Boston:
Wadsworth Cengage Learning, 2011. Print.
"Roman Catholic Church, Buildings and Religion." theotherside.co.uk. Invicta Media.
2000. Web. 11 July 2012.
.
Spielvogel, Jackson. Western Civilization. 8th Ed. Boston: Wadsworth Cengage
Learning, 2010. Print. Read More
Share:
Tags
Cite this document
(“Disputation of Doctor Martin Luther (Luthers 95 Theses at the Internet Essay”, n.d.)
Retrieved from https://studentshare.org/history/1600067-disputation-of-doctor-martin-luther-luthers-95-theses-at-the-internet-christian-library

“Disputation of Doctor Martin Luther (Luthers 95 Theses at the Internet Essay”, n.d. https://studentshare.org/history/1600067-disputation-of-doctor-martin-luther-luthers-95-theses-at-the-internet-christian-library.
Comments (0)
Click to create a comment or rate a document

...with the Pope and the Church. Martin Luther despite all his sufferings all through his crusade of love for Christ, wrote 95 Theses known as "The Disputation of Doctor Martin Luther on the Power and Efficacy of Indulgences" in 1517. These Theses further enhanced Lutherism or the protest against unjust claims made by Church officials including the Pope. And thus, emerged the Protestant aspect of the Church, first, in entire Europe and then in the world on a much wider scale. Luther's Protestant beliefs spread like a jungle's fire for they hit the hearts...
3 Pages(750 words)Essay

Martin Luther and the 95 Theses

...Martin Luther and the 95 Theses When the history of western civilization is written and the dis revolves around the single most influential human being of the past 1,000 years, Johan Gutenberg is very often the final choice due to the omnipresence of the written word. An equal argument could be made in favor of Martin Luther, however. The justification for this ascension of Luther as the single most influential person in the western world over the past millennium rests less upon what is known than what shall forever remain speculation. The mystery in question is what the world might look like today had the authority...
4 Pages(1000 words)Essay

...Martin Luther: On Christian Liberty Born in 1483, and subsequently a German monk and a scholarly theologian, Martin Luther contributed significantly to the meaning of Christianity and to the Reformation. Though his seminal work was addressed to Pope Leo X, Luther's purpose was to harmonize Christian values by making them accessible to people equally and by attacking religious hierarchies that corrupted what he viewed as the essential nature of Christianity. Indeed, as stated by Witte (2005), "Pope and prince, noble and pauper, man and woman, slave and free -- all persons in Christendom,...
2 Pages(500 words)Essay

...Martin Luther was a German of Theology whose radical ideas about the Church and papal had brought the wrath of the Pope and Church of Europe. Martin Luther was Professor of Theology in the University of Wittenberg from where he later, did his doctorate in Theology. During the fifteenth and sixteenth century, Church had greatly influenced socio-political institutions across Europe. The basic premise of Christianity was the supremacy of God and Bible as the Holy Scripture taught people to be God fearing and repent their sins through repentance. Martin’s views differed dramatically from the Church as he believed that faith...
2 Pages(500 words)Assignment

...church, previously the most sacred of all churches has become the most anarchistic hideout of thieves, hell not even antichrist could come to devise any addition to it wickedness. Concerning Christian liberty, Luther, explains that Christian faith is not easy, and nobody has the wisdom upon it as there is no experiment proof among the social virtues. He describes Christian as the freest lord of all, and subject to none; also as the most dutiful servant of all, and subject to everyone. These are both statements of Paul, who sees. Even if he is free from all people, however, I have made myself servant unto all (cor 9-19). Luther neither despises the...
2 Pages(500 words)Essay

...Module Martin Luther as a Reformist Martin Luther was a Christian reformist who lived between 1483 and 1546 in Germany where he had been a Catholic priest till the beginning of his reforms. His reforms were based on Christian faith and he begun the reforms in 1517 after being outraged by activities of the Catholic Church where he believed that Christian principles and teachings were being manipulated by church leaders (Wengert 328). The main issue which he disputed involves the claim on forgiveness of sins by use money where people were being taught that they could buy freedom from sin and Gods...
2 Pages(500 words)Essay

..., class and race gets blamed for sentimental weakness. Last but importantly, there is a need to develop love, which is a unifying factor for Moslem, Hindu, Buddhist, Jewish, and Christian beliefs. Additionally, fast action is necessary to close the uncertainties and tension while shifting from the use of pain to punish freedom fighters. References King Jr., Martin Luther (1961). "The Quest for Peace and Justice." Norway: University of Oslo.... Summary ENG 1201 Summary Leadership by nobleness awarded him the Nobel peace and justice appreciation. In an addressof gratitude for the identification into one of the rare opportunities, Martin Luther king focused on various areas of interest. The lecture started...
2 Pages(500 words)Essay

...Number] How do the issues Luther present for debate illustrate to the problems in the Church of his day? Martin Luther a theology professor and a priest of Wittenberg wrote his doctrine of “Disputation on power and efficacy of indulges/95 theses” in 1514 to denote the debatable actions of the Catholic Church and its practices. He wrote 95 theses to proclaim erroneous practice of selling indulges to sinners to purchase their salvation. Luther observed that Wittenberg community instead of confessing in the Church was heading to Anhalt or Brandenberg to buy salvation tickets (partial or...
2 Pages(500 words)Essay

...Martin Luther Born on 10th, November, 1483 in Eisleben, Germany, Martin Luther was a renowned Augustinian monk who from theeastern Germany. He is remembered for his efforts that contributed to the modern German language through translations of the Bible. Luther’s rejection for the Roman Catholic Church began when he contradicted Pope Leo X’s decision to build Peter’s Basilica. He placed his arguments on scriptures especially from the New Testament. He was not supportive of the hierarchy of the Roman Catholic Church and the bribery claims he cited for his rejection of the church. He expressed his concerns regarding papacy in the interpretation of...
2 Pages(500 words)Essay

7 Pages(1750 words)Term Paper
sponsored ads
Save Your Time for More Important Things
Let us write or edit the essay on your topic "Disputation of Doctor Martin Luther (Luthers 95 Theses at the Internet Christian Library)" with a personal 20% discount.
GRAB THE BEST PAPER

Let us find you another Essay on topic Disputation of Doctor Martin Luther (Luthers 95 Theses at the Internet Christian Library) for FREE!