Comments (0)
Add to wishlistDelete from wishlist
Cite this document
Summary
As the commander-in-chief of the Navy and the Army, Lincoln passed this Proclamation as a war measure that he deemed a necessity. The emancipation had some effects…
Download full paperFile format: .doc, available for editing
HIDE THIS PAPERGRAB THE BEST PAPER91.3% of users find it useful 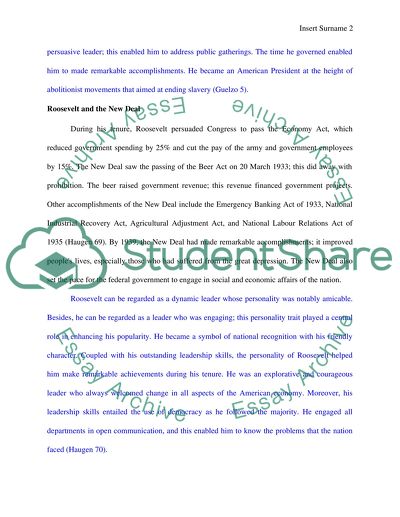 Historical Presidents Lincoln and the Emancipation of slaves President Lincoln made notable achievements with his Emancipation Proclamation, which he issued on January 1, 1863. As the commander-in-chief of the Navy and the Army, Lincoln passed this Proclamation as a war measure that he deemed a necessity. The emancipation had some effects on slavery in the United States (Guelzo 3). First, it led to the disruption of the agricultural economies of the Confederate States; this enabled slaves to flee the plantations. Moreover, it contributed to the collapse of the Confederate States. Lincoln declared that all slaves living in the territory were free; as a result, the slaves rebelled against the federal government. The Emancipation Proclamation played a central role as it freed several slaves (Guelzo 4).
Abraham Lincoln’s personality, leadership skills, communication skills and the time he governed played a central role to his success. First, he was a leader with charisma and unique storytelling ability. He could initiate conversations whenever he saw a group of people gathered. Moreover, he was a hardworking leader who made sure that he strived to succeed in everything and anything he did. His determination enabled him to pass the Emancipation Proclamation that saw an end to slavery in some states. In addition, he can be regarded as an empowering and persuasive leader; this enabled him to address public gatherings. The time he governed enabled him to made remarkable accomplishments. He became an American President at the height of abolitionist movements that aimed at ending slavery (Guelzo 5).
Roosevelt and the New Deal
During his tenure, Roosevelt persuaded Congress to pass the Economy Act, which reduced government spending by 25% and cut the pay of the army and government employees by 15%. The New Deal saw the passing of the Beer Act on 20 March 1933; this did away with prohibition. The beer raised government revenue; this revenue financed government projects. Other accomplishments of the New Deal include the Emergency Banking Act of 1933, National Industrial Recovery Act, Agricultural Adjustment Act, and National Labour Relations Act of 1935 (Haugen 69). By 1939, the New Deal had made remarkable accomplishments; it improved peoples lives, especially those who had suffered from the great depression. The New Deal also set the pace for the federal government to engage in social and economic affairs of the nation.
Roosevelt can be regarded as a dynamic leader whose personality was notably amicable. Besides, he can be regarded as a leader who was engaging; this personality trait played a central role in enhancing his popularity. He became a symbol of national recognition with his friendly character. Coupled with his outstanding leadership skills, the personality of Roosevelt helped him make remarkable achievements during his tenure. He was an explorative and courageous leader who always welcomed change in all aspects of the American economy. Moreover, his leadership skills entailed the use of democracy as he followed the majority. He engaged all departments in open communication, and this enabled him to know the problems that the nation faced (Haugen 70).
Clinton and his welfare Reform
President Clinton signed the Personal Responsibility and Work Opportunity Reconciliation Act on August 22, 1996. He mainly aimed at ending welfare in order to make remarkable transformations in America’s broken welfare system. The primary features of the welfare system included giving incentives and increasing indirect forms of income. Moreover, the welfare reform aimed at stressing job creation and penalizing poor families who depended on welfare for having many more children (Conley 69).
The welfare reform made significant contributions; it helped in balancing the federal budget. It also led to a decline in the levels of poverty since the number of families depending on welfare fell by half. It created jobs for mothers who previously depended on welfare. Because of the Welfare reform, many people realized that welfare could not be taken for granted. As a result, they aimed at securing decent jobs. Thus, the welfare reform can be regarded as one of the significant accomplishments of the Clinton era (Conley 70).
Clinton’s personality can be regarded as that of an ambitious, charming, and self-confident person. These unique qualities contributed immensely to his success during the two terms he served as the United States President. His leadership skills can be regarded as having been charismatic. This enabled him to convince the United States citizens to embrace the changes he proposed. He paid much attention to public demands whenever he addressed the public. His style of communication enabled the involvement of all people in the welfare reform. The time he governed contributed to his success since he was the President at a time when the United States needed changes in the Welfare system (Conley 72).
Works Cited
Conley, Richard. Historical Dictionary of the Clinton Era. Maryland: Scarecrow Press, 2012. Print.
Guelzo, Allen. Lincolns Emancipation Proclamation: The End of Slavery in America. New York: Simon and Schuster, 2006. Print.
Haugen, Brenda. Franklin Delano Roosevelt: The New Deal President. Minneaplois: Compass Point Books, 2006. Print. Read More
Share:
Tags
Cite this document
(“Historical Presidents Research Paper Example | Topics and Well Written Essays - 500 words”, n.d.)
Historical Presidents Research Paper Example | Topics and Well Written Essays - 500 words. Retrieved from https://studentshare.org/history/1594621-historical-presidents

CHECK THESE SAMPLES OF Historical Presidents

...Presidents Day (Alex) Presidents day is celebrated in America on every third Monday of February in order to mark the people’s respect towards George Washington, the first president of America. It is a federal holiday in America and in many states it is also a state holiday. Presidents holiday was implemented initially in the district of Columbia in 1880 by a legislation of the Congress and expanded in 1885 to accommodate all the federal offices. This paper briefly analyses the significance of Presidents day. Till 1971, the actual birth day of Washington (February 22) was selected as the Presidents day. However from January 1, 1971...
3 Pages(750 words)Essay

...?Response Essay II Cold War era Presidents were faced with a number of issues unique to that time period, particularly the sense that the general specter of Soviet-style communism was the single most important issue confronting the United States. Because of this, all other issues were influenced by this larger more supposedly fundamental concern. Issues that we consider to be at the core of the United States democratic experiment, like individual freedom, were trumped by the political realities of the Cold War whenever the two came into conflict. Sadly, they came into conflict more than we might like. On the one hand, we can accept the idea that Soviet-style communism was not a source of or way of providing real freedom....
2 Pages(500 words)Coursework

New 3 Questions on Politics and Administration

...be a better explanation of the activism of the court Harriger (2011). According to this author, the power war is between the congress and the federal government as well as the state governments. Harriger (2011) terms the behaviour of the courts in this case as a model of judicial activism in the sense that they do so against some constitutional values. Separation of powers is then argued to be more centralised towards public affairs in the recent past than it was thirty years ago. The issue of federalism and separation of powers comes in if the party controlling the houses differ from the President’s party. Divided governments have historically been used to show the various historical...
6 Pages(1500 words)Essay

...Introduction Throughout the history of the United s, there have been many great men who have occupied the Oval Office as President of the UnitedStates. Some have led the country through extremely trying periods and crises, some have led it to peace and prosperity, and some have been instrumental in making America the sole remaining Superpower of the world that it is today. The greatness of a President is a matter of opinion, of course; and it depends on a number of possible variables. Thus, ranking the greatest American Presidents in the two-hundred-seventeen year history of the country under its current governmental system requires a establishing a benchmark that can serve as a...
5 Pages(1250 words)Essay

...Introduction President George Bush and his predecessor, former President Bill Clinton, are two vastly different leaders who have led the United s in entirely opposite directions. Clinton balanced the federal budget, presided over the greatest economic expansion in the history of the United States, improved and maintained strong foreign relations, achieved meaningful environmental progress, and utilized the military with discretion and effectiveness. On the other hand, Bush has gotten the U.S. bogged down in a quagmire in Iraq while failing to face an overt nuclear threat from North Korea , blown open the federal budget deficit, presided over economic recession and...
3 Pages(750 words)Essay

The Roles of The Presidents

...The Roles of the Presidents Introduction The United s of America was deeply involved in the Middle East war, specifically the Vietnam War. Her involvement in the war is documented to have been initiated by some of her presidents. Most notably of these presidents dragging the nation into the war are Dwight David Eisenhower, John F. Kennedy, Lyndon B. Johnson and President Nixon. They played their fair share in one way or the other by starting the war, its progression and finally cessation. The discourse below aims to explore the actual roles played by these presidents in the United States of America's entrance, escalation and conclusion of the...
3 Pages(750 words)Essay

All the Presidents Men

...All the President's Men The primary difference between book and film versions of All the President's Men is length. Readers of the book may be shocked to learn that the film comes to a rather brusque end at about the midway point of the book. This decision was obviously made for two reasons, and it does nothing to lessen the intensity of the story. When one thinks of the greatest translations of a book to film, two very often spring immediately to mind. It is not surprising, therefore, that in his glowing review of this film the renowned critic Vincent Canby referred to both when called All the President's Men "an unequivocal smash-hit-the thinking man's Jaws" (1976). Just as the...
4 Pages(1000 words)Movie Review

... College: Visual Arts and Film Studies In Mesopotamia, cultural exchanges influenced the arts of different peoples. The original inhabitants of the land, Sumerians, had their own cultures and arts. However, since the land had no barriers, other communities and cultures moved into Mesopotamia and introduced their cultures, which influenced the original Sumerian culture. Among the early communities that moved into Mesopotamia are the Babylonians and Assyrians. The Babylonians and Assyrians carried with them their cultures, including their arts. Ultimately, these cultures blended with that of the Sumerians. The evidence of this is in the effect of the cultural integration into the original arts of these communities. Before... College: Visual...
1 Pages(250 words)Essay

...Assignment on American presidents Assignment on American presidents This assignment is an analysis of some few facts about theUS Presidents based on the party with which they were elected to office and also their term in office. Q. In the history of American leadership there have been eighteen presidents elected on the Republican Party ticket. Q2 and 3. Out of the eighteen Republican presidents, only three of them were 50 years of age or less while seven presidents were elected on the Democratic party ticket with 50 years or less in age. Q4. The total number of presidents who were 50 years or less at their time of...
1 Pages(250 words)Assignment
sponsored ads
Save Your Time for More Important Things
Let us write or edit the research paper on your topic "Historical Presidents" with a personal 20% discount.
GRAB THE BEST PAPER

Let us find you another Research Paper on topic Historical Presidents for FREE!