Comments (0)
Add to wishlistDelete from wishlist
Cite this document
Summary
The success of the cotton gin facilitated the separation of the South and the North by fostering slavery. Economic differences between the South and the North, which started in 1798 led to…
Download full paperFile format: .doc, available for editing
HIDE THIS PAPERGRAB THE BEST PAPER95.3% of users find it useful 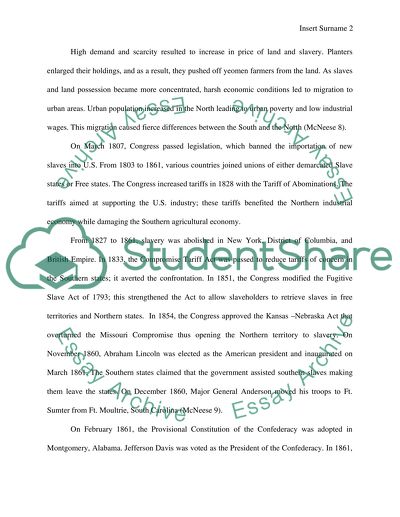 Soil Exhaustion as a Major Contributing Leading to the American Civil War In 1793, Eli Whitney invented the cotton gin, which made cotton extremely profitable. The success of the cotton gin facilitated the separation of the South and the North by fostering slavery. Economic differences between the South and the North, which started in 1798 led to eruption of the civil war in 1861. The Southern economy depended solely on cotton. The Northern industries were buying raw cotton from South and processing it to finished products. Civil war was a war in which industrial strength and technology played a significant role (McNeese 6). The North had developed an increasingly industrialized mixed economy while the South developed the agricultural economy. From 1800 to 1861, there were high percentages of slaves in the South than in the North. During this period, there were slave rebellions; most of the slaves were captured and executed (McNeese 7).
Southern states kept government spending and taxation at low levels due to high debts as compared to the North. Southerners were incapable of supporting education as compared to the Northerners. Illiteracy was widespread in the South; in 1850, 20 percent of all white adults in the Southern states were illiterate. In the North, illiteracy was less than one percent. Though slavery was profitable, it contributed to soil exhaustion, lack of technological innovation and high debts. Soil exhaustion and erosion diminished cotton land availability.
High demand and scarcity resulted to increase in price of land and slavery. Planters enlarged their holdings, and as a result, they pushed off yeomen farmers from the land. As slaves and land possession became more concentrated, harsh economic conditions led to migration to urban areas. Urban population increased in the North leading to urban poverty and low industrial wages. This migration caused fierce differences between the South and the North (McNeese 8).
On March 1807, Congress passed legislation, which banned the importation of new slaves into U.S. From 1803 to 1861, various countries joined unions of either demarcated Slave states or Free states. The Congress increased tariffs in 1828 with the Tariff of Abominations. The tariffs aimed at supporting the U.S. industry; these tariffs benefited the Northern industrial economy while damaging the Southern agricultural economy.
From 1827 to 1861, slavery was abolished in New York, District of Columbia, and British Empire. In 1833, the Compromise Tariff Act was passed to reduce tariffs of concern in the Southern states; it averted the confrontation. In 1851, the Congress modified the Fugitive Slave Act of 1793; this strengthened the Act to allow slaveholders to retrieve slaves in free territories and Northern states. In 1854, the Congress approved the Kansas –Nebraska Act that overturned the Missouri Compromise thus opening the Northern territory to slavery. On November 1860, Abraham Lincoln was elected as the American president and inaugurated on March 1861. The Southern states claimed that the government assisted southern slaves making them leave the states. On December 1860, Major General Anderson moved his troops to Ft. Sumter from Ft. Moultrie, South Carolina (McNeese 9).
On February 1861, the Provisional Constitution of the Confederacy was adopted in Montgomery, Alabama. Jefferson Davis was voted as the President of the Confederacy. In 1861, various states seceded from the Union including Florida, Alabama, Mississippi, and Georgia. On March 1861, the Confederate Congress authorized an army of volunteers. On April 1861, the war began when the Confederates fired South Carolina’s Ft. Sumter. During the civil war allegiance of Mexican Americans, especially those living in Texas were deeply divided. Some Mexican Americans joined the troops for the Confederacy, while others voluntarily joined the Union army. Texas territory contributed to Mexican – American war (McNees 12).

“Discuss Soil Exhaustion As a Major Contributing Factor Leading to the Essay”, n.d. https://studentshare.org/history/1593907-discuss-soil-exhaustion-as-a-major-contributing-factor-leading-to-the-american-civil-war-by-addressing-the-significant-events-from-1798-to-1861.
Comments (0)
Click to create a comment or rate a document

...controversial because gold had been discovered in California and there was a Gold Rush. Henry Clay drafted the Compromise of 1850 that admitted California as one of the free states, and other territories such as Nevada, Utah, Arizona and New Mexico would not have slavery any more. Another development in the Compromise of 1850 was the solution to the Texas border problem. Additionally, in Columbia, the slave trade that was practised in the area was abolished, but slavery was still permitted. The Compromise of 1850 increased the number of free states, causing an imbalance between the states supporting slavery and free states. This contributed to the American Civil War. 2...
6 Pages(1500 words)Assignment

Hospitals and Medicine in the American Civil War 1861-1865

...? Hospitals and Medicine in the American Civil War 1861-1865 Introduction During the period of Civil War, medical technology was limited. As a result, doctors made no attempt of maintaining sterility. Most physicians of this time did not attend any medical school; instead, the doctors trained as apprentices. The few doctors who had attended medical schools received insufficient training. American Civil war had a great effect on almost everybody in the United States. With most men out in the fight, women wanted to show their support by showing an interest in becoming nurses. Many women...
5 Pages(1250 words)Research Paper

...?Full s Teacher’s s American Civil War The South Abraham Lincoln was the president of the Unites s of America in the period when the Civil War took place; between 1860 and 1865. The American public was subject to several forces of division and rebellion that caused tension to a unified country. The United States was composed of states willing to overcome the rebellious calls by the group of nations referred to as the Confederacy. Secession was the theme of the Civil War where the Confederacy that constituted 11 nations, wanted to bring down the Union through their withdrawal. Certain reasons fueling the rebellion charges by the confederate stood out in the Civil War. Among the most conspicuous charges chanted by the rebellion... was the...
5 Pages(1250 words)Essay

... American civil War Introduction The American civil War was fought between 1861 and 1865 and had both economics and politics as the leading causes. A common notion was that the North was no longer willing to continue with slavery as an essential part of American society. The Northern economy was mainly based on factories and wages while the South economy had large cotton plantations. The south needed slaves to work in the cotton plantations and requested for new territories to be admitted in the Union as slave states in order to prevent the slaves from joining the free territories (Arnold and Wiener 17). On the other part, North states were against slavery. The South wanted the new states to be slavery states, but the North wanted... be...
3 Pages(750 words)Term Paper

...armies. More so, they shaped the history of America; and gave a blueprint of its future - the American life. On April 9, 1865, when Lee surrendered at Appomattox Court House, Virginia, the Civil War came to the edge of end. It was a moment in history when a nation was going to be born sans slavery, sans right of succession, and abiding everything 'freedom' and 'equality' meant in essence. However, the constant collision of ideologies that had preceded this conclusion for about five years of Civil War (1861-65) is an interesting phenomenon to observe. Lee and Grant: Two Different Men Lee came from Virginia, and family-values, culture,...
3 Pages(750 words)Essay

...The American civil war remains to be the deadliest and the most destructive of all America’s war, it is considered to be the first modern war on the continent and perhaps the globe and the only conflict in the United States (U.S.) history that was fought on the nation’s soil, with some of the 620.000 0f the 2.4 million soldiers, millions more injured and the territory of the south become devastated4. The American Civil War of 1861 to 1865 and was the most important and worst event in the American history as it was an extremely bloody...
6 Pages(1500 words)Essay

...The American Civil War The American civil war occurred in 1861-1865 due to slavery. The war was aimed at governing the unification and independence of the Confederacy or the south. Seven undiplomatic Southern states claimed their withdrawal from the United States and thus formed Confederacy States of America. In return, the northern states and the southern states split. This paper analyzes the causes and events leading to the American Civil War. One of the causes of American civil...
1 Pages(250 words)Essay
sponsored ads
Save Your Time for More Important Things
Let us write or edit the essay on your topic "Discuss Soil Exhaustion as a major contributing factor leading to the American Civil War by addressing the significant events from 1798 to 1861" with a personal 20% discount.
GRAB THE BEST PAPER

Let us find you another Essay on topic Discuss Soil Exhaustion as a major contributing factor leading to the American Civil War by addressing the significant events from 1798 to 1861 for FREE!