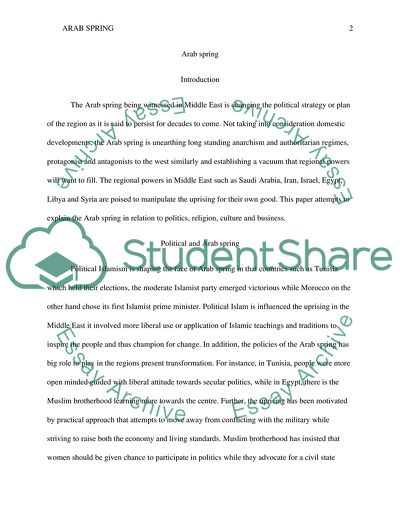 Extract of sample "The Arab Spring"

Arab Spring Arab spring Introduction The Arab spring being witnessed in Middle East is changing the political strategy or plan of the region as it is said to persist for decades to come. Not taking into consideration domestic developments, the Arab spring is unearthing long standing anarchism and authoritarian regimes, protagonist and antagonists to the west similarly and establishing a vacuum that regional powers will want to fill. The regional powers in Middle East such as Saudi Arabia, Iran, Israel, Egypt, Libya and Syria are poised to manipulate the uprising for their own good. This paper attempts to explain the Arab spring in relation to politics, religion, culture and business.
Political and Arab spring
Political Islamism is shaping the face of Arab spring in that countries such as Tunisia which held their elections, the moderate Islamist party emerged victorious while Morocco on the other hand chose its first Islamist prime minister. Political Islam is influenced the uprising in the Middle East it involved more liberal use or application of Islamic teachings and traditions to inspire the people and thus champion for change. In addition, the policies of the Arab spring has big role to play in the regions present transformation. For instance, in Tunisia, people were more open minded guided with liberal attitude towards secular politics, while in Egypt, there is the Muslim brotherhood learning more towards the centre. Further, the uprising has been motivated by practical approach that attempts to move away from conflicting with the military while striving to raise both the economy and living standards. Muslim brotherhood has insisted that women should be given chance to participate in politics while they advocate for a civil state headed by either clerics or military. Political Islamism aimed to bring genuine democracy to the people (Warren, 2012).
Cultural and Arab spring
For the first time in Arab history, the feeling of belonging to one’s own country has grown largely in that masses inspired by their unique cultural resurgence that incorporates dancing on the street and changing old folk songs into revolutionary anthems is common everywhere. Through their culture such as street dancing, people fill the streets asking for freedom. Additionally, the quest for freedom is also manifested in poetry. Initially, women have been barred from publicly expressing themselves but now they are doing without fear that was poised by their strict cultural demands.
Religious and Arab spring
Religion influenced the Arab spring in that the suicide committed by Bouazizi and a series of copycats immolations ignited the revolution. In Islam, suicide is prohibited; therefore, people were angered by conditions that led this man commit suicide. Islam has strict laws in which justice is at the centre of the sharia law, therefore, people wanted to bring justice to the dead man by removing the oppressive regimes from power.
Businesses and Arab spring
Inflation was on rising rapidly in that people from the region had far less money to deposit in their bank accounts, the fear of currency devaluation, and unemployment all sparked the uprising. For instance, it is estimated in Egypt, unemployment among the youth is at least 25%. The Arab spring on the hand has created misery in that tourism has dwindled since most hotels have been closed. More so, foreign investment has been badly affected to an extent that foreign investors have shut up their shops and left (Warren, 2012). In countries such as Libya oil and construction industries have fallen sharply due to unsuitable working conditions.
Conclusion
Summarily, the rise of political Islamism ignited the revolution since people wanted to oust authoritarian regimes and replace them with true democracy. More so, religion influenced the people to revolt in that it advocated for justice and equality in society. Devaluation of currency and rise in inflation also triggered the violence. People presented their grievances via cultural manifestation such as street dancing and poetry. Arab spring will bring new leadership in the region and will see the rise of new regional powers.
Reference
Warren, A. (2012). The battle for the Arab spring: Revolution, counter-revolution and the
making of a new era. New York: Yale University Press. Read More
Share:
Tags
Cite this document
(“The Arab Spring Essay Example | Topics and Well Written Essays - 500 words - 1”, n.d.)
Retrieved from https://studentshare.org/history/1592676-the-arab-spring

CHECK THESE SAMPLES OF The Arab Spring

Nature of The Arab Spring

...Nature of the Arab Spring The essay discusses the Arab Spring, a series of revolutions throughout the Arab world, and its implication for international relations. The role of Islamic sectarianism in the outbreak of these revolutions is examined. Particular emphasis is given to the revolt in Egypt, where conservative religious groups such as the Muslim Brotherhood retain great power. Introduction The 2011 to 2012 Arab uprising was not a surprise to many observers who argue that sustainability of status quo is impossible. The trends witnessed in North Africa through Middle East have led many critics to explore the political trends in these...
12 Pages(3000 words)Research Paper

The Impact of the Arab Spring on Egypt's Energy

...The Impact of the Arab Spring on Egypt's Energy Critics have developed various arguments against the Arab Springs with respect to the impacts that it has on energy sector. Most Arab countries are principal oil and gas producers in the international market. During the Arab Spring, the global oil market experienced price shock, which is a feature of the civil unrest. The production of oil and gas stalled during the civil upheavals thereby influencing the supply of oil and gas in the international market. The economic conditions of these countries changed because of the unfavourable conditions for international trade. It is...
16 Pages(4000 words)Research Paper

...or uprising called The Arab Spring in the Middle East. We all saw it on TV, internet, newspapers and other forms of media but never really cared about. It was a movement of citizens to rise against their governments to have freedom and democracy so that their lives will become better. We may not realize it, but the freedom that our forefathers fought with blood, sweat and tears is not currently enjoyed by many people in other countries. Today, even as this paper is written, there are still a lot of people struggling and fighting for freedom. In the country of Syria, there is now a civil war going on where people have to fight, suffer and die by the thousands, sometimes brutally, just to have freedom. It...
2 Pages(500 words)Essay

Causes behind the Arab Spring

...﻿The entire Middle East has been reeling under internal conflicts and civil war for quite some time now. Many of the so-called dictators in many Arab nations including Egypt, Bahrain, Yemen, and Jordan faced the wrath of the citizens and the streets witnessed bloody clashes between rebels and government troops. However, it is not possible to pinpoint one reason behind the ‘Arab Spring’. In fact, As Ayoob (2012) points out, there are a number of factors behind the uprising; both internal and external. The first one, according to many Arab and other independent thinkers (as cited in Ayoob, 2012), is the suspected role of the US; and it is alleged that the...
2 Pages(500 words)Essay

...﻿The Arab Spring The Arab Spring is the series of events that happened and are still happening in the Arab world when the people of the various Arab nations started mass protests and open revolts against the autocratic regimes ruling over them. These events started taking place in Tunisia and they spread through Egypt, Yemen, Libya, Bahrain, and currently, they are happening in Syria. The Arab Spring has seen the fall of several autocratic regimes whose toppling has surprised many in the world. The coming to an end of some of the most powerful Middle Eastern regimes has provided the opportunity for...
11 Pages(2750 words)Research Paper

...Middle East Conflict Resolution and the Arab Spring! Introduction The land around the eastern and the southern shores of Mediterranean Sea is known as the Middle East region of the world. The region is extended from Morocco to the Arabian Peninsula and Iran or even more than that. The countries falling under this region are known as Middle East countries. Notably, the nations under Middle East region are very poor, including the least developed nations like Gaza and Yemen. However, the countries like United Arab Emirates (UAE) and Qatar are recognized as the two extreme wealthy nations in the modern era. The prime source of national income for these regions can be ascertained as oil and natural gas, which is extensively produced... from...
25 Pages(6250 words)Essay

...THE ARAB SPRING (Causes and Consequences) by: ID Number Presented of the School Location Due on: December 09, 2014 @ 1:11 a.m. Introduction and Summary The so-called “Arab Spring” is the romanticized version of political and social events in North Africa and elsewhere in the Middle East wherein people engaged in mass uprising to demand political and economic reforms. Most of the countries where the “Arab Spring” took place had autocratic governments and people took to the streets in protests against dictatorial or absolutist governments; some of the protests were relatively non-violent protests while in other countries the protesters...
5 Pages(1250 words)Essay

Revolutionary Leadership in Russian Revolution and the Arab Spring

...Throughout the history, rapid revolutionary events had often changed to the core the political systems of seemingly stable countries. Among them, there are some prominent examples (like French Revolution in 1789), which had a direct influence on the future path of the country’s development. In this context, revolutionary events in Russia in 1917 and recent events of the Arab Spring started in 2010 either had already led or are potentially leading to the same dramatic consequences. Although, the diversities of political regimes, peculiarities of social structures, and the driving forces for change are so striking that it is hard to impose any clear classification between different revolutions in all the...
8 Pages(2000 words)Essay

- Assess the extent to which an Arab Winter followed, and was caused by, the Arab Spring

...Your Goes Here John Q. The essay analyses how the Arab Spring led to the advent of the Arab Winter in the Middle East. John Q. Student Professor D. Military Sciences 26-Mar-15 Arab Spring There are various factors that influenced the Arab Spring. Those factors include social, political, technological, economic, cultural and religious aspects. However, the origin of the Arab Spring, a revolution, also has an extended factor of influence – belief. The belief that led to the revolutionary movement was not a singular belief but a collective and multifaceted one, which was not only needed, but...
4 Pages(1000 words)Assignment

Adverse Effects of the Arab Spring

...Adverse Effects of the Arab Spring The Arab Spring relates to the democratic revolts that started in Tunisia in and spread across many Middle East countries. The Arab Spring changed the political landscape of the Middle East by overthrowing despotic regimes in Yemen, Libya, Syria, Egypt, and Tunisia (Schwartz 1). The goal and motivation of the revolts were to initiate a democratization process in the Arab world. However, instead of leading to democratization, the Arab Spring has destabilized existing social identities and states (Rózsa 2-11). Indeed, the post-revolution in the Middle...
4 Pages(1000 words)Essay
sponsored ads
Save Your Time for More Important Things
Let us write or edit the essay on your topic "The Arab Spring" with a personal 20% discount.
GRAB THE BEST PAPER

Let us find you another Essay on topic The Arab Spring for FREE!