Comments (0)
Add to wishlistDelete from wishlist
Cite this document
Summary
He took over office with two main agendas-his campaign promises and the agenda that emerging issues had put on him. Trusted sources and opinion polls have rated…
Download full paperFile format: .doc, available for editing
HIDE THIS PAPERGRAB THE BEST PAPER96.9% of users find it useful 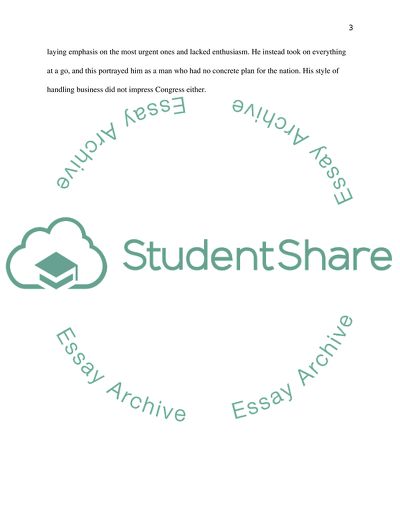 What do you think the likelihood of success will be for President Obama to implement the remaining items of his agenda? President Obama had fairly implemented the promises he made to the country when he was running for president. He took over office with two main agendas-his campaign promises and the agenda that emerging issues had put on him. Trusted sources and opinion polls have rated Obama’s success at a whopping 60%.1 Obama has implemented changes in the American Health care system, energy sector and housing sector not to mention the immensely appreciated stimulus package that saved financial institutions from meltdowns and also created employment for many Americans.
Congress members from both fronts of the political divide all have an input in what is to be implemented and what is not. They exercise their power through voting for or against any policy. For any of these items to be implemented, a majority of the Senate members must vote for the item through persuasion and lobbying. The likelihood of President Obama to implement the items of his agenda that are yet to be done is high. The fulfillment of items in his agenda led to the recent up-surge in his approval ratings.
President Reagan is an excellent example of a president who was able to push his agenda forward despite all odds. His changes especially in the budget and tax reforms cannot go unnoticed.2 Reagan was successful in his bid to implement his agenda because he possessed the self discipline and clarity required to control the agenda. His strategy was to take on an issue a time rather than to have a full plate that neither he nor congress could handle at a time.
President Jimmy Carter, on the other hand, was relatively unsuccessful. This was because the challenge of being president was simply overwhelming. He did not prioritize his agenda laying emphasis on the most urgent ones and lacked enthusiasm. He instead took on everything at a go, and this portrayed him as a man who had no concrete plan for the nation. His style of handling business did not impress Congress either.
Notes
1. Peter Ferrara, President Obamas Future Agenda.(New York: Encounter Books, 2010), 23-30
2. William A. Galston, "The Future of President Obamas Agenda." The Sunday Times. March 18,
2012, http://www.brookings.edu/opinions/2009/0419_obama_galston.aspx (accessed March 18,
2012).
Bibliography
Ferrara, Peter. President Obamas Future Agenda. New York: Encounter Books, 2010.
Galston, William A. "The Future of President Obamas Agenda." The Sunday Times. March 18, 2012.
http://www.brookings.edu/opinions/2009/0419_obama_galston.aspx (accessed March 18, 2012). Read More
Share:
Tags
Cite this document
(“What do you think the likelihood of success will be for President Essay”, n.d.)
Retrieved from https://studentshare.org/history/1591821-what-do-you-think-the-likelihood-of-success-will-be-for-president-obama-to-implement-the-remaining-items-of-his-agenda

(What Do You Think the Likelihood of Success Will Be for President Essay)
https://studentshare.org/history/1591821-what-do-you-think-the-likelihood-of-success-will-be-for-president-obama-to-implement-the-remaining-items-of-his-agenda.

“What Do You Think the Likelihood of Success Will Be for President Essay”, n.d. https://studentshare.org/history/1591821-what-do-you-think-the-likelihood-of-success-will-be-for-president-obama-to-implement-the-remaining-items-of-his-agenda.
Comments (0)
Click to create a comment or rate a document

...Clinton through his exemplary oratory skills and clear vision of things. The key to Obama’s success was the ability to trigger enthusiastic support from youth and running a nationwide grassroots campaign. Moreover Obama effectively used internet for fundraising which made him the only candidate with enough financial resources to challenge Clinton; the candidacy race was ultimately won. Obama went on to beat John McCain, the Republican candidate after three presidential debates in which he presented his strong stance on ending the Iraq War, Energy Independence and Universal Health Care. Obama has done quite a lot of...
5 Pages(1250 words)Research Paper

...Prize. He made history in 2008 when he won the U.S. presidential election. But who is Barack Obama, the individual? Answering that question is much more difficult than it seems. Belonging to a family headed by a Kenyan father and his childhood spent in Jakarta definitely separates him from the long line of presidents hailing, almost exclusively, from the native land. More fruitful for understanding who he is and what he is about is the portrait of a highly ambitious politician with the self-assurance that stems from a stellar Ivy League record, a wife to match and early electoral successes. These are the traits that do not, as an understatement,...
8 Pages(2000 words)Essay

...? Reagan Revolution through President Obama During one of his democratic campaigns in Nevada in 2008, president barrack Obama recognized the achievements of the Regan revolution. Major historical turning points in the Regan regime include, privatization of companies and groups to provide services previously provided by the government and rebuilding of the military. These historical turning points impact on the current America's society, economy, politics, and culture. AIDs was first reported in 1980s, initially the American people lost confidence in the government because it refused to acknowledge it, but as time went by the confidence was restored as the government took measures to address it. Regan’s deregulation movement saw... ...
3 Pages(750 words)Research Paper

...Obama’s works and policies as a president, it becomes evident that his great leadership skills have contributed to his success as a great president and a famous world leader. Obama’s leadership skills and styles have been recognized globally and he has made use of this ability to excel as a great president of the nation. “Obama understands that if you aspire to be a highly effective leader, you must win the trust and confidence of the people you hope to lead.” (Leanne, 2009). Thus, it is fundamental to recognize that Barak...
4 Pages(1000 words)Essay

...﻿President Obama and Agenda for Possible Second Term United States president is elected through a competitive political system, which has only two main parties the Democratic and the republican parties. The presidential candidates in the current elections are Barrack Obama for the Democratic Party and Mitt Romney for the Republican Party (Morgan, 2012). The candidates need to have outstanding communication skills and campaign system, which will successfully sell their ideologies for possible election by the public. The campaign teams need to develop proper strategies to ensure that presidential candidate and party wins the elections with majority votes....
7 Pages(1750 words)Essay

...Running Head: PRESIDENT BUSH'S CRIME CONTROL AGENDA President Bush's Crime Control Agenda In APA Format By University The crime control agenda of President George Bush is often likened to that of President Reagan's as the former served as his vice president for as long as eight years (Marion 1995). Even though Bush cannot be commended for the installation of an extremely strong crime control policy, it becomes notable that during his regime, conservative polices highlight his approach. The crime control agenda of the...
2 Pages(500 words)Essay

...Political Science Introduction Perhaps because of the proximity of their terms the Presidency of Bill Clinton and the current term of President Obama share a number of striking similarities. Clinton was very committed to his vision and it showed throughout his career. Similarly, Obama remained steadfast on his campaign promise to institute substantial health care reform and saw the successful passage of the Health Care Reform Bill in March 2010. Conversely, there are a number of key factors that differentiate the two presidents’ times in office. Few presidents have both raised more questions about the standing of the presidency and simultaneously presided over a longer period of sustained prosperity than President Clinton. Obama... was a...
10 Pages(2500 words)Term Paper

...supersedes all other issues. His election also set the stage for a prolonged era of passionate ideological warfare in the country which illuminated the deep philosophical divide already present. Several of Obama’s policy initiatives the first two years were not popular including the health care bill, auto rescue plan, economic stimulus and the financial bailout started by the Bush administration and completed during Obama’s first year. Obama supported the bailout while Bush’s support of the nearly trillion dollar plan, interestingly, ended after his term ended. Financial regulation reform was popular and the highly successful auto...
7 Pages(1750 words)Research Paper

...incomes, since they would be reduced of the burden of having to repay the loan in full. The president also wanted to get to the students’ voting alliance that was responsible for his winning back in 2008, and told them that he needed their votes again in 2012 elections. The officials of the White House alleged that those students who had one or more federal loans would be allowed to merge their debts, which would reduce interest rates by half of the percentage point. Obama said that this plan was supposed to get rid of those federal subsidies that were taken to the private banks after the loans are merged, and this would help in improving the economy. He believed that if a big percentage...
2 Pages(500 words)Essay

...President Obama When President Obama took over the leadership of the U.S. many people were optimistic. People’s anticipation for positive changes in the country was high. Being the first African American president in the U.S., people also did not exactly know what kind of leadership style he would adopt. At least now he has reigned for more than one term and so people can comment on his leadership. To a great extent, I support the opinion that President Obama is a charismatic and transformational leader who is both extroverted and conscientious as noted by Rubenzer and Faschingbauer (2004). Although it...
1 Pages(250 words)Essay
sponsored ads
Save Your Time for More Important Things
Let us write or edit the essay on your topic "What do you think the likelihood of success will be for President Obama to implement the remaining items of his agenda" with a personal 20% discount.
GRAB THE BEST PAPER

Let us find you another Essay on topic What do you think the likelihood of success will be for President Obama to implement the remaining items of his agenda for FREE!