Comments (0)
Add to wishlistDelete from wishlist
Cite this document
Summary
He was born to a single mother in the West Indies who earned her living as a shopkeeper and she taught Hamilton his first economic principles. He…
Download full paperFile format: .doc, available for editing
HIDE THIS PAPERGRAB THE BEST PAPER95.1% of users find it useful 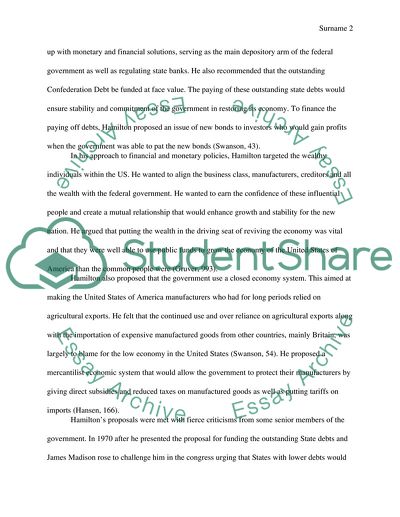 Hamilton’s Fiscal Policies Introduction Alexander Hamilton was an intriguing individual, a self-made man who possessed a kind of ambition that fueled incredible success. He was born to a single mother in the West Indies who earned her living as a shopkeeper and she taught Hamilton his first economic principles. He later went on to a big mercantile firm as an apprentice. These modest beginnings paved way for Hamilton’s becoming the principal activist for a contemporary capitalist economy in the early national US (Ushistory.org, 3). This paper discusses Hamilton’s contributions and proposals to the congress on the fiscal and monetary policies. It also looks at how Alexander Hamilton’s policies wanted to use the wealthy, manufacturers and the US National Bank to turn around the economy that was affected by a series of civil revolutions; as well as why his proposals were criticized. Finally, it discusses the impacts of his policies. Top of Form
Alexander Hamilton was the first treasury secretary of the United States government headed by President Washington (Swanson, 43). When he was appointed the treasury secretary, the United States government was facing hard economic times following the American revolutions. The government was faced with huge debts, inflation and the majority of economic sectors seemed to be doing badly. It is then that President Washington tasked Alexander Hamilton with the duty of stabilizing the United States economy. Alexander Hamilton was to come up with fiscal policies that would revive the economy of the federal government. He advocated for modern capitalism to turn around the United States economy (Hansen, 166).
In his first steps, towards reviving the economy, Hamilton proposed the chartering of the first United States National Bank. The bank’s mandate was assisting the government in coming up with monetary and financial solutions, serving as the main depository arm of the federal government as well as regulating state banks. He also recommended that the outstanding Confederation Debt be funded at face value. The paying of these outstanding state debts would ensure stability and commitment of the government in restoring its economy. To finance the paying off debts, Hamilton proposed an issue of new bonds to investors who would gain profits when the government was able to pat the new bonds (Swanson, 43).
In his approach to financial and monetary policies, Hamilton targeted the wealthy individuals within the US. He wanted to align the business class, manufacturers, creditors and all the wealth with the federal government. He wanted to earn the confidence of these influential people and create a mutual relationship that would enhance growth and stability for the new nation. He argued that putting the wealth in the driving seat of reviving the economy was vital and that they were well able to use public funds to grow the economy of the United States of America than the common people were (Gruver, 993).
Hamilton also proposed that the government use a closed economy system. This aimed at making the United States of America manufacturers who had for long periods relied on agricultural exports. He felt that the continued use and over reliance on agricultural exports along with the importation of expensive manufactured goods from other countries, mainly Britain, was largely to blame for the low economy in the United States (Swanson, 54). He proposed a mercantilist economic system that would allow the government to protect their manufacturers by giving direct subsidies and reduced taxes on manufactured goods as well as putting tariffs on imports (Hansen, 166).
Hamilton’s proposals were met with fierce criticisms from some senior members of the government. In 1970 after he presented the proposal for funding the outstanding State debts and James Madison rose to challenge him in the congress urging that States with lower debts would be disadvantaged by being forced to pay debts for states with higher debts (Robert & Ambrose, 91). Madison and Jefferson also opposed Hamilton’s proposal of opening a bank, with Madison arguing that the formation of the bank was not constitutional and was against the centralization on the government operations. Jefferson on the other hand argued that the starting of a bank was not a prerogative of the congress and hence unconstitutional (Gruver, 993).
Conclusion
Apparently, despite the many criticisms that Hamilton faces, his fiscal and monitory policies of starting a Central Bank, his support for manufacturing industry and his public credit handling mechanisms have become the pillar of many economies other than that of the United States. His policies have lived long after his death – most economies have a central Bank (National Bank), which acts as the depository arm of the government. His proposal on the government supporting manufacturers has also been the backbone for America’s economy ever since. Moreover, his policy on using the wealthy to drive the economy proved very instrumental in having the United States of America clear her debts.
Works Cited
Gruver, Rebecca. An American History. New York: Knopf. 1985. Print.
Hansen, Alvin. Fiscal Policy and Business Cycles. London: Routledge, 2003. Print.
Robert,martin and Ambrose,douglas The Many Faces of Alexander Hamilton : The Life and Legacy of Americas Most Elusive Founding Father. New York: New York University Press, 2006. Print.
Swanson , Donald. The Origins of Hamiltons Fiscal Policies. University of Florida Press. 1963. Print.
Ushistory.org. Hamiltons Financial Plan. 2008. Web. Read More
Share:
Tags
Cite this document
(“History Discussion Research Paper Example | Topics and Well Written Essays - 500 words - 4”, n.d.)
History Discussion Research Paper Example | Topics and Well Written Essays - 500 words - 4. Retrieved from https://studentshare.org/history/1591431-history-discussion

CHECK THESE SAMPLES OF History Discussion

... First of all, I do not agree to the assertion of General Leonard Wood that the Cubans fully believed and considered the U.S. as their liberator that time. One reason is that many of the Cubans during that time were doing protest and resistance movement for their real freedom. The U.S. do not really gave independence to the Cubans from the Spaniards that time. Instead, Cuba became a new territory of U.S. by the very systematic manner of annexation. Also, the Cubans might not agree with Wood’s notion of U.S. as a “their faithful friend” for it has a different agenda behind its actions towards Cuba. The U.S. said that the reason for their action towards Cuba is primarily for humanitarian purposes and to help the country improve... First of all, ...
1 Pages(250 words)Assignment

... Great awakening Introduction The great awakening was a spiritual revival and renewal that was witnessed in the American colonies especially New England in 1730s and 1740s. This movement deemphasized the significance of the church doctrines or teachings and instead emphasized on greater significance on the individual and the spiritual status. In addition, Christians began to deemphasize themselves with the set up approach to worship at a time which resulted to a general sense of resonant and complacency among Christians and instead, they adopted a way comprised of great emotion and fervor in prayer. The great awakening was started by the Wesley brothers, Jonathan Edwards and George Whitefield in England and moved to American... Great...
2 Pages(500 words)Research Paper

... New England, Chesapeake and Middle Colonies Slavery in Chesapeake took preeminence a century after the slavery statute was legalized by law makers. The enslaved, who comprised of women, men and children, toiled to produce grains and tobacco that ultimately led to elegant lifestyle of the gentry. Culture of the native born with main reference to slaves was mainly inclined on both Anglo and African culture. The people enslaved had a good working knowledge on English and this helped them in laborer negotiations with their masters and also to articulate issues of benefits both for them and the families that they emanated from (Berlin 34-35). Puritans and the Pilgrims were the initial settlers of New England. The economy was majorly... New...
1 Pages(250 words)Research Paper

...History Discussion Compare the Strengths and Weaknesses of the Confederation Government. Was It Doomed to Failure? Why? The initial written plan of government for United States is the Articles of Confederation that lasted from the year 1776 to 1781. The confederation government approved every immunities and constitutional rights to every free citizen belonging to different states. Moreover, the government allowed its citizens to be taxed and also delivered a strong amendment process. In addition, the confederation government generates a stronger national government by introducing taxation reforms along with various amendment systems (Richardson, “Social Studies Item Specifications for the Alabama High...
1 Pages(250 words)Research Paper

... Reasons why U. S Declared War on Great Britain The war of 1812 between the U.S and the Great Britain lasted from 1812 to1815 and was mainly fought on land, coasts and waterways of North America. In the year 1812, the United States of America was inexorably headed for war with Britain. The years after the American Revolution had come to an end, France experienced its own revolution in 1789 and that the French society descended into total horror. Great Britain played a part in planning to overthrow the French revolution by organizing coalitions between 1793 and 1815 which was headed by Napoleon Bonaparte (Borneman 56). The events in France shaped the American society in that during this time, American people thought... Reasons why U. S...
2 Pages(500 words)Research Paper

..., and the presidential election in the house when none of the candidates receives a majority in the process. Further, the campaigns were more of the candidate’s regional rivalries and personality than divisive national issue and partisan politics. In fact, candidates did not campaign, but the actual campaigning exercise was carried out by surrogates and mangers, with various partisans speaking and writing in candidates’ favor throughout the year. The presidential election involved three key figures in the History of America, and was decided in the House of Representatives. Here, one man won, the other helped him win, yet another one stormed out of Washington criticizing the whole affair as “ a corrupt bargain” The dubious...
2 Pages(500 words)Research Paper

... with as the officials still held their positions in the government thereby covering up any attempt to uncover their actions. This led to starting of a campaign that was aimed at eliminating all officials that had corruption records but this move was unsuccessful (Brinkley, & Dyer 2004, p. 94). Works Cited Brinkley, Alan, and Davis Dyer. The American History. New York: Houghton Miffin Harcourt, 2004. Print.... President Jackson administration President Jackson administration cannot be said to be successful despite his era being characterized with passing of many bills. The bills that were passed during President Jackson era were many than all the previous presidents bills combined (Brinkley, & Dyer 2004). Despite the president making a tremend...
1 Pages(250 words)Research Paper

...﻿ History Discussion The 1924 Immigration Act is one thing that was a very good step by the government of USA. In my opinion limiting the number of people coming to the country was a thoughtful thing as it could help many people from our own country establish themselves in a much better way. It was just after the wartime period and many people were coming back themselves and they did not have jobs. This jobless situation was the worst thing that could have happened. When there is the scarcity of jobs, people steal, kill and commit heinous crimes. The Immigration Act, in my opinion, was one very effective way to curtail the possible hazards that could occur in the society (Murray, 2008). The...
2 Pages(500 words)Essay
sponsored ads
Save Your Time for More Important Things
Let us write or edit the research paper on your topic "History Discussion" with a personal 20% discount.
GRAB THE BEST PAPER

Let us find you another Research Paper on topic History Discussion for FREE!