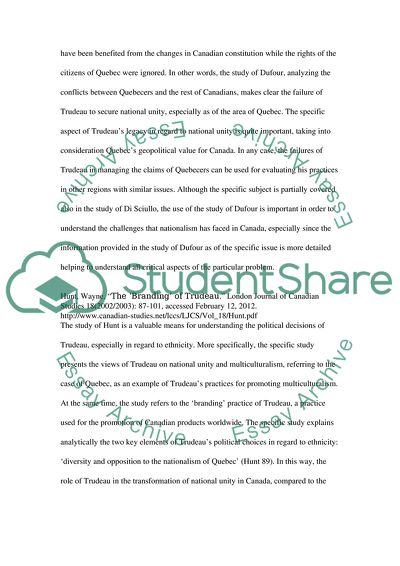 1. Topic: The legacy of Pierre Trudeau on national unity 2. Bibliographical information Di Sciullo, Vincent “Globalization, Ethni and Politics of Identity: Québec’s Resistance to Cultural Homogenization.” McGill International Review 1.1(2011): 27-34, accessed February 12, 2012.
http://www.irsam.ca/wp-content/uploads/2011/05/VincentdiSciullo.pdf
The specific study focuses on the role of ethnicity and identity in the development of local politics. At the next level, the influence of globalization on local politics, especially in regard to ethnicity, is extensively analyzed. This study, which is quite recent published in 2011, has been chosen for this paper for the following reason: Di Sciullo explains the relationship between globalization and local politics, referring to a particular issue: ethnicity. The case of Quebec is used as an example for showing the resistance of a region to globalization using a particular element: the language; in accordance with Di Sciullo the French language has been used by Quebecers as a cause for protecting the region’s identity, even if the region is indispensable part of Quebec. In this way, the political choices of Trudeau in regard to ethnicity and identify of Quebec, as compared to other regions of Canada, can be clearly understood.
Dufour, Christian. “Trudeau’s Canadian Legacy from a Quebec Perspective: New Canadian Nationalism Weakens Canada.” London Journal of Canadian Studies 18(2002/2003): 5-13, accessed February 12, 2012.
http://www.canadian-studies.net/lccs/LJCS/Vol_18/Dufour.pdf
The study of Dufour emphasizes on the role of Trudeau in the misunderstanding caused in regard to the demands of Quebecers, as citizens of a critical Canadian region. Moreover, through the above study it is made clear that the political decisions of Trudeau had led to the following problem: various cultural groups across Canada have been benefited from the changes in Canadian constitution while the rights of the citizens of Quebec were ignored. In other words, the study of Dufour, analyzing the conflicts between Quebecers and the rest of Canadians, makes clear the failure of Trudeau to secure national unity, especially as of the area of Quebec. The specific aspect of Trudeau’s legacy in regard to national unity is quite important, taking into consideration Quebec’s geopolitical value for Canada. In any case, the failures of Trudeau in managing the claims of Quebecers can be used for evaluating his practices in other regions with similar issues. Although the specific subject is partially covered also in the study of Di Sciullo, the use of the study of Dufour is important in order to understand the challenges that nationalism has faced in Canada, especially since the information provided in the study of Dufour as of the specific issue is more detailed helping to understand all critical aspects of the particular problem.
Hunt, Wayne. “The ‘Branding’ of Trudeau.” London Journal of Canadian Studies 18(2002/2003): 87-101, accessed February 12, 2012.
http://www.canadian-studies.net/lccs/LJCS/Vol_18/Hunt.pdf
The study of Hunt is a valuable means for understanding the political decisions of Trudeau, especially in regard to ethnicity. More specifically, the specific study presents the views of Trudeau on national unity and multiculturalism, referring to the case of Quebec, as an example of Trudeau’s practices for promoting multiculturalism. At the same time, the study refers to the ‘branding’ practice of Trudeau, a practice used for the promotion of Canadian products worldwide. The specific study explains analytically the two key elements of Trudeau’s political choices in regard to ethnicity: ‘diversity and opposition to the nationalism of Quebec’ (Hunt 89). In this way, the role of Trudeau in the transformation of national unity in Canada, compared to the past, is made clear; under these terms, the incorporation of this study in the bibliography list has been considered as unavoidable.
Ipperciel, Donald “Where did Trudeau go wrong? On the Question of Nationalism and Charter Patriotism in Canada.” Constitutional Forum constitutionnel 17.2(2008): 39-47, accessed February 12, 2012.
http://www2.csj.ualberta.ca/Ipperciel/PagePersonnelle/textes/WhereDidTrudeauGoWrong.pdf
The study of Ipperciel can be characterized as an analysis of the failures of Trudeau, especially in regard to the issue of nationalism in Canada. Through the above study, the political choices of Trudeau in regard to nationalism and patriotism can be understood. The specific study is differentiated from the other ones, also incorporated in the bibliography, at the particular point: the views of Trudeau on patriotism are compared with those of Habernas, offering a sociological explanation of Trudeau’s political choices. At the same time, the specific study analyzes an important challenge that legislators in Canada had to face when reforming the country’s Constitution: the choice between ‘the union and the division of the country’ (Ipperciel 41).
Rocher, Francois “The Evolving Parameters of Quebec Nationalism.” International Journal on Multicultural Societies 4.1(2002):1-21, accessed February 12, 2012.
http://www.criec.uqam.ca/Page/Document/textes_en_lignes/evolving_parameters.pdf
The study of Rocher also refers to the development of nationalism in Quebec, an activity that had led to the strengthening of the region’s economic and social life. The specific study analyzes the nationalism in Canada, as reflected in the case of Quebec. The difference of this study from the others, also referring to the case of Quebec is the following one: the specific study analyzes the concept of nationalism across Canada, not only in Quebec, and explains the reasons for which the promotion of nationalism in Canada has been strongly opposed, a problem reflected in the failures of constitutional negotiations of 1990 and 1992. Read More
Share:
Tags
Cite this document
(“Bibliography Essay Example | Topics and Well Written Essays - 500 words - 1”, n.d.)
Retrieved from https://studentshare.org/history/1589166-bibliography

CHECK THESE SAMPLES OF Bibliography

...in their children’s education improves the children’s academic performance and increases their cognitive ability. The research questions being studied, therefore, are, 1. What are the effects of parental involvement and control on children education? 2. How are parents involved in their children’s education? 3. Do cultural socialization have any impact on the children’s cognitive abilities and academic performance? 4. Does parental, involvement, control and cultural socialization affect a child’s academic and cognitive performance? Section B: Annotated Bibliography Banerjee, Meeta, Zaje Harrell, and Deborah Johnson. 2011. “Racial/Ethnic Socialization and Parental Involvement in Education as Predictors of Cognitive...
4 Pages(1000 words)Research Paper

... Module Mishari: Stock versus Bonds What are stocks and bonds? Brady, Jason. Income Investing with Bonds, Stocks and Money Markets. New York: McGraw Hill, 2012. The source states that a bond is a type of debit which allows a company’s shareholders to act as its lenders rather than the borrower (Brady, 29). Stocks, on the other hand, are a type of ownership. They are indicators of participation in a corporation’s development. How do they work as investments? Kristof, Kathy. Investing 101 (Bloomberg). New York: Bloomberg Press, 2008. In today’s financial markets, stocks and bonds are the most common types of marketable securities. Investors who are risk-averse and are searching for a recognized periodic payment arrangement usually... Module...
3 Pages(750 words)Essay

... Due Rene Descartes: Life and Times Joachim Descartes, and, his wife, Jeanne Brochard, welcomed their son, Rene, on March 31, 1596. The Descartes family was quite wealthy; the majority of the relatives were in the fields of medicine or law. He had 3 siblings, one of which, a brother, died at birth. After the death of his mother, Rene, when he was just a year old, went with his siblings to be raised by their grandmother; even after their father remarried they remained with their grandmother. Although not a lot of specifics about Rene’s early childhood are known it is known that he was perceived as an intelligent but rather fragile or frail child. At the age of 11, in 1607, he was sent to the boarding school, La Fleche, a Jesuit... Due Rene...
3 Pages(750 words)Essay

...22 November Annotated Bibliography Allen, Michael. “Civil Disobedience and Terrorism Testing the Limits of Deliberative Democracy.” Theoria: A Journal of Social & Political Theory 56.118 (30 Mar. 2009): 15-39.Web. 22 Nov. 2011. Literary Reference Center. Deliberative Democracy concerns open communication among all stakeholders and that opinions are open to discussion and criticism. Allen studies the limitations of the commitment of deliberative democrats to communication and persuasion over threats and intimidation through investigating civil disobedience and terrorism. He argues that deliberative democrats cannot justify restrictions to terrorism. He agrees with Cohrs that fear can impact the acceptance of...
7 Pages(1750 words)Annotated Bibliography

...passed laws that ensured that disabled kids were entitled to fundamental rights like right to education and equal treatment among others that they were initially denied. Therefore, John F Kennedy can only be termed as a legend who made a difference in the human race and as an icon whose image will never fade away. Many people owe him gratification and the American society in general must feel indebted to continue with what he started. Annotated Bibliography Bryant, Nick. The Bystander: John F. Kennedy and the Struggle for Black Equality. New York: Basic Books, 2006. The book by Bryant Nick provides the reader with rather critical view on the Kennedy’s campaign. The author depicts Kennedy as “a manipulator” of blacks...
2 Pages(500 words)Annotated Bibliography

...Annotated Bibliography Gatto, John. Against School. http uncgengtas.wikispaces.com/file/view/Gatto_Against+School.pdf The author, a graduate from Colombia and a teacher by profession uses the education system in America to express how education contributes to the production of incomplete citizens. He begins by explaining about how he pursued teaching profession, a career that he did not life. He further details on how teaching profession made him experience hard times in schools that he taught. First he begins by making his stand that teaching is so boring. He then asserts that teaching denies one the freedom of privacy. From his argument, one can deduce that the main theme of his article is that education offered to...
2 Pages(500 words)Annotated Bibliography
sponsored ads
Save Your Time for More Important Things
Let us write or edit the essay on your topic "Bibliography" with a personal 20% discount.
GRAB THE BEST PAPER

Let us find you another Essay on topic Bibliography for FREE!