Comments (0)
Add to wishlistDelete from wishlist
Cite this document
Summary
The transformation to political stability and equal representation for all members of society took concentrated efforts on the part of the…
Download full paperFile format: .doc, available for editing
HIDE THIS PAPERGRAB THE BEST PAPER94.2% of users find it useful 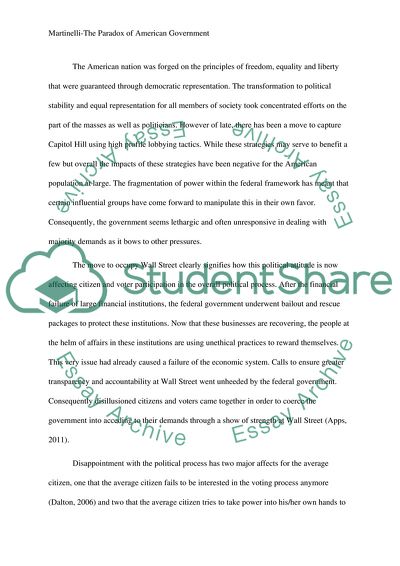 Extract of sample "The Paradox of American Government"

Week 4-Assignment “The Paradox of American Government” Robin Martinelli POL 423-WCO-V2D1 Political Science Jill Legare 27/12 The American nation was forged on the principles of freedom, equality and liberty that were guaranteed through democratic representation. The transformation to political stability and equal representation for all members of society took concentrated efforts on the part of the masses as well as politicians. However of late, there has been a move to capture Capitol Hill using high profile lobbying tactics. While these strategies may serve to benefit a few but overall the impacts of these strategies have been negative for the American population at large. The fragmentation of power within the federal framework has meant that certain influential groups have come forward to manipulate this in their own favor. Consequently, the government seems lethargic and often unresponsive in dealing with majority demands as it bows to other pressures.
The move to occupy Wall Street clearly signifies how this political attitude is now affecting citizen and voter participation in the overall political process. After the financial failure of large financial institutions, the federal government underwent bailout and rescue packages to protect these institutions. Now that these businesses are recovering, the people at the helm of affairs in these institutions are using unethical practices to reward themselves. This very issue had already caused a failure of the economic system. Calls to ensure greater transparency and accountability at Wall Street went unheeded by the federal government. Consequently disillusioned citizens and voters came together in order to coerce the government into acceding to their demands through a show of strength at Wall Street (Apps, 2011).
Disappointment with the political process has two major affects for the average citizen, one that the average citizen fails to be interested in the voting process anymore (Dalton, 2006) and two that the average citizen tries to take power into his/her own hands to defend his interests. The fact that citizens are less and less interested in the political process has been related for a few decades now (Powell, 1986). Overall citizen participation in the voting process has been on the decline progressively as citizens especially from marginalized groups fail to see any point in voting when their demands will not be met with. Already the American democratic process is under threat from large gaps in voter turnout through various factors such as income, length of residence, ethnicity, educational achievement and age (AGTP, 2010). Also there are threats emerging to voter turnout such as attempts to roll back early voting, Election Day Registration, same day voter registration among other efforts. These attempts to ostracize certain groups of citizens from the political process should have been met with stiff resistance in the legislature and on the streets, if citizens and voters were more hopeful of the political machinery. However there is limited response on the part of citizens and voters to reverse these moves. This in turn serves as an indicator to the fact that the average citizen and voter have lost interest in the political process in the United States which is dangerous for the health of the overall political system.
In closing, dissatisfaction of certain groups in society through these means would only further lead citizens and voters to take to protest in order to defend their rights. While normally citizens and voters would proceed to their legislators in order to address their grievances, now citizens and voters are turning to the streets to address their concerns. The Occupy Wall Street movement is a stark reminder to this development. The need of the hour is to ensure active citizen and voter participation in the political process so that dissatisfaction with the political process can be contained before its turns into political contagion. If the situation is allowed to proceed as such, there are chances that simple street protests may eventually transform into violent rioting.
REFERENCES:
AGTP. (2010). Voter Participation in the 2010 Midterm Election. Retrieved January 29,
2012, from Mass Vote: http://massvote.org/wp-content/uploads/2011/11/AGTP-Gaps-Final.pdf
Apps, P. (2011, October 11). Wall Street action part of global "Arab Spring"? Retrieved
January 29, 2012, from Reuters : http://www.reuters.com/article/2011/10/11/uk-global-politics-protest-idUSLNE79A03Z20111011
Dalton, R. J. (2006). Citizenship norms and political participation in America: The good
news is ... the bad news is wrong. CDACS Ocassional paper 2006-01 , 1-14.
Powell, G. B. (1986). American voter turnout in comparative perspective. The American
Political Science Review 80(1) . Read More
Share:
Tags
Cite this document
(“The Paradox of American Government Essay Example | Topics and Well Written Essays - 500 words”, n.d.)
The Paradox of American Government Essay Example | Topics and Well Written Essays - 500 words. Retrieved from https://studentshare.org/history/1588290-the-paradox-of-american-government

CHECK THESE SAMPLES OF The Paradox of American Government

...? The outsourcing policy of the United s Government Outsourcing in the United s began in 1980 because of slow economic growth and high unemployment rate. It was encouraged by excessive U.S. debts, Free Trade Agreements, globalization and the intense desire for profitability. In effect, NAFTA and the World Trade Agreement made outsourcing easier for transnational American companies to operate in Mexico and Canada. Globalization that started in 1970 made IT operations inexpensive for these companies, and soon enough US transnational companies began to transfer its manufacturing operations offshore (Thomas Heffner, 2010). In the United States, according to PLU (n.d.), President Bush has been an advocate of pro-outsourcing policies... per hour....
1 Pages(250 words)Personal Statement

...? (YOUR (THE The Federal Government: Separation of Powers and Checks and Balances The American federal government is one of the most perfect examples of a tripartite sovereign leadership which exhibits the notion of separation of powers. With the separated powers of several ruling individuals, the very idea of American democracy is concretized. The American Constitution states that, “Generally, the legislative branch makes America's laws, the executive branch enforces the laws, and the judicial branch decides cases under the laws.” (The American Constitution cited in Cengage). However, the powers vested upon each of these branches are accordingly limited by checks and balances imposed by each of the three. In this light and upon... . The only...
2 Pages(500 words)Essay

...?Causes of Public Trust and Mistrust to the U.S. Government Nye argues that economic dimension is one of the many factors that affect the general public to trust the United States government (qtd. in Moon 2). This dimension is fundamental because the government --since the time of the New Deal -- has been perceived as an institution that promotes and develops the economic life of the people. It is embedded in the minds of the Americans that one of the essential functions of a government, such as the federal government, is to ameliorate the lives of the masses. The government is tied to the market/economic forces. Further,...
4 Pages(1000 words)Essay

...in the Western frontier. The United States returned to isolationist foreign policy since domestic problems plagued the country. Furthermore, Europe was in chaos itself and the US could not afford to indulge itself in such petty issues. No, the US has embraced the role of being a leader of the globe and is the world’s super power. Does the United States now follow a moral idealist or a political realist approach in international affairs? To what extent? Is it easy for the president and Congress to set a course for foreign policy? What kinds of measures can the United States use to combat terrorism? How can it defend its citizens against chemical and biological weapons? Works Cited Schmidt, Steffen W., Mack C. Shelley, and Barbara A....
1 Pages(250 words)Essay

...American Government The fundamental role played by the government in the United s is undisputable. There is need to have a central governing body that oversees the running of the country prior to the demands of the society for which it is responsible (Jillson 231). The political system is an essential definition of the form of governance in place in the United States. The undertakings of the political system in the context of governance are further enhanced by the U.S Constitution, which is the primary highly regarded document. We the People is a statement is a statement that occurs within the constitution several times. Personally, the...
2 Pages(500 words)Essay

... American Government In order to avoid the abuse of power by the three arms of the government, the judiciary, the legislature and the executive, separation of powers, as a political doctrine is provided for by the USA constitution. This provision is in form of checks and balances, providing for each arm of the government the powers and responsibilities that it should exercise (Kilman and Costello, 12). The idea of separation of powers is found in the first three articles of the American constitution. These articles provides for different duties and powers, with the first article handling the roles of the house and the senate, the second article providing for the powers and responsibilities of the president, the vice president... and the...
2 Pages(500 words)Research Paper

...American Government The American government is welcoming to changes, but also conservative. Same sex marriages and marijuana are not legal on the federal level. Though some states have legalized their use, the federal government has each time overridden their decision through a federal legislation. Despite the fact that states are independent from the federal government with regard to laws not related to federal spending, the opposite is true. The Congress can override or force states to comply with federal decisions, regardless of the state laws, though the US President can find a way to circumvent congressional decisions. History of...
5 Pages(1250 words)Research Paper

...into a shock as the stock markets crashed and the giant financial institutions collapsed or went bankrupted. Even the governments in the wealthiest nations came up with rescue packages to save their financial systems from further worsening. It was soon felt that this global financial meltdown would affect the livelihoods of almost everyone around the world in an increasingly inter-connected world (Shah, 2010). The paper will highlight on various factors of global economic crisis of 2008-2009 with major focus on the US economy and how far the key actors of the American government are successful in curbing the evil effects of the crisis on the US economy. Primal causes and the US...
8 Pages(2000 words)Research Paper

...American Government: Economy and Health Question one: “What should the United States government do, if anything, to improve the current economic situation? How would you measure success?” A countries’ economy refers to the system by which commodities are produced and consumed in the nation. The progress of a nation is based on its ability to use the available resources to produce goods and services as well as create market for the goods in an efficient way. For proper use of resources, a country needs to apply proper economics which involve making smart choices to cope with scarcity. Though United States has had good economic performance, it has experienced a number of shake ups....
2 Pages(500 words)Essay

Let us find you another Essay on topic The Paradox of American Government for FREE!