Comments (0)
Add to wishlistDelete from wishlist
Cite this document
Summary
The author of this essay under the title "Vietnam and the Twentieth Century Experience" comments on the events of Vietnamese history. According to the text, in the 19th century, Vietnam was an integral part of the colony of France called French Indochina. …
Download full paperFile format: .doc, available for editing
HIDE THIS PAPERGRAB THE BEST PAPER94.6% of users find it useful 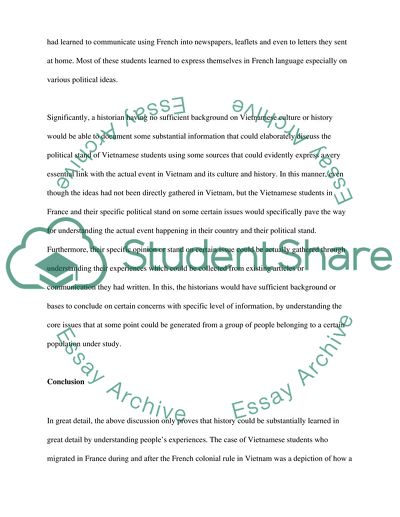 Extract of sample "Vietnam and the Twentieth Century Experience"

﻿Vietnam and the Twentieth Century Experience
Introduction
In 19th century, Vietnam was an integral part of the colony of France called French Indochina. The subjugation process took so long and even for decades but the whole process of French control was completed in 1893. For historians, this event could be generally appreciated or understood in great detail if the Viet people’s experiences will be taken into account.
In this essay, the proponent discusses the importance of studying the experiences of Vietnamese in the course of their history with colonial France in the 19th century for the purpose of understanding what they valued the most. The proponent also discusses the resources that could be helpful to students of history particularly in understanding Vietnam’s culture and history.
In particular, the proponent discusses the case of Vietnamese students in France during and after the colonial role of the French government in Vietnam, and their specific stand on nationalism that could mirror the Vietnamese culture or entire history.
The issue of Vietnamese nationalism
Student migration in France during and after the colonial role of French government in Vietnam was a significant source of information that could elaborately discuss the issue regarding Vietnamese nationalism (McConnell 1989). Vietnamese students at this very moment in time had learned to communicate using French into newspapers, leaflets and even to letters they sent at home. Most of these students learned to express themselves in French language especially on various political ideas.
Significantly, a historian having no sufficient background on Vietnamese culture or history would be able to document some substantial information that could elaborately discuss the political stand of Vietnamese students using some sources that could evidently express a very essential link with the actual event in Vietnam and its culture and history. In this manner, even though the ideas had not been directly gathered in Vietnam, but the Vietnamese students in France and their specific political stand on some certain issues would specifically pave the way for understanding the actual event happening in their country and their political stand. Furthermore, their specific opinion or stand on certain issue could be actually gathered through understanding their experiences which could be collected from existing articles or communication they had written. In this, the historians would have sufficient background or bases to conclude on certain concerns with specific level of information, by understanding the core issues that at some point could be generated from a group of people belonging to a certain population under study.
Conclusion
In great detail, the above discussion only proves that history could be substantially learned in great detail by understanding people’s experiences. The case of Vietnamese students who migrated in France during and after the French colonial rule in Vietnam was a depiction of how a specific group of people with certain experiences could actually represent the entire population’s stand on certain issues, culture and history. In the above example, the bottom line was actually the integration of Vietnamese students’ experiences and understanding their political stand on the current event in the making of their history, which specifically at some point would also pave the way for knowing some important issues on Vietnam’s culture and history. The evidences on the other hand could only be retrieved by collecting some written communications as important resources that were associated with the subjects involved.
References
McConnell, S. (1989). Leftward journey: the education of Vietnamese students in France, 1919-1939. Brunswick, NJ: Transaction Publishers. Read More
Share:
Tags
Cite this document
(“Vietnam and the Twentieth Century Experience Essay”, n.d.)
Retrieved from https://studentshare.org/history/1587397-vietnamese-declaration-of-independence

“Vietnam and the Twentieth Century Experience Essay”, n.d. https://studentshare.org/history/1587397-vietnamese-declaration-of-independence.
Comments (0)
Click to create a comment or rate a document

CHECK THESE SAMPLES OF Vietnam and the Twentieth Century Experience

.... Their main aim was to discredit their enemies morally there were psychological interpretations that encouraged the deal of anti-communism especially in the underdeveloped countries. Vietnam was a victim and this would signal rise in communism marking capitalism’s end as a world order marking out America no longer the country under which the worlds of civilization were to be based. (Kinnard 1991) 4Legacy had various aspects and among them were sensitivity and vulnerability of the democratic administrations on the issues of the Far East. These new administrations would inherit a linked perception of China’s numbers, vastness, and its belligellance and revived senses of the golden horde. Macpherson Marya weighs the...
5 Pages(1250 words)Essay

...?Wilfred Owen’s poem, “Dulce Et Decrum Est” and Tim O’Brien’s “The Things They Carried” deal with two different wars—World War One and the Viet Nam War. While these wars seem to have little in common, Owen and O’Brien are both critical of the notion that war is honourable. The main theme that dominates both works is as follows: the realities of war that soldiers on the ground experience contradicts the idealistic view of war promoted by governments / the military. Compare/contrast the approaches and strategies these writers use to explore this theme. The most painful episodes of twentieth century history are its wars. Starting with the losses of the First World War in 1914 the Second...
4 Pages(1000 words)Research Paper

... Full Twentieth-Century in America (History and Political Science) 08 July (estimated word count = 971) Introduction The twentieth century spans the period starting from the years 1901 to 2000 and this period coincides with some of the most momentous events in human history. Some events had a major impact on the course of world history and it takes a great insight and knowledge to know how these events helped shape the world today. America in the two centuries since its birth and independence from mother country Great Britain had been a powerful global force to reckon with, as it embarked on a robust expansionist strategy in acquiring new territories to expand its markets and hegemony. Its militarism snared for it various colonies... such as...
3 Pages(750 words)Essay

...Using examples from the major Twentieth Century conflicts, discuss the significance of the 3 main levels of analysis in the causes of wars There were several wars within the span of the twentieth century. These wars included World War 1, World War II, Korean Conflict (War), Desert Storm, Iraq War. Each of the wars included major and minor battles. They had varying and distinct reasons behind them. Allies and foes were distinctly different in each case. Each of the wars had a level of analysis. These levels were individual state, and system. The levels of war analysis form a hierarchy. The responsibilities of the hierarchy rely on the scale and nature of the...
8 Pages(2000 words)Essay

..., the central theme is twin: to endeavor and engage the reader to the prominent literary icons of Turkey and also functions as a standpoint and a nibble in the domains of Turkish fiction as well as short story, that could be instrumental to illuminate light to Turkish identity in addition to its links to Europe mores. Petite chronicle submit to an exertion of narrative that in most cases is documented in text arrangement. In this arrangement or medium happens to be more than longer works of fiction, this include novellas (with reference to twentieth century) as well as novels or books. There exists a wider margin flanking expert writers with respect to illustrating petite chronicling and how far it...
6 Pages(1500 words)Assignment

Music in the Twentieth Century

...Expressionism is a term inured to indicate the apply of 'dissonance' and "chromatics" for touching results, which first floated up in the artistic text of the early on 20th century (Norman 1985). When used in an arty sense, a propos particularly to the employ of powerful colors, stirred up brushstrokes, and rambling space. Relatively than a solitary mode, it was an ambiance that had effects on not only the sculptures but also dance, movies, prose and the drama (Norman 1985). Expressionism is an arty approach wherein the artiste endeavors to portray not object realism but moderately the skewed sensations and reactions that issues and actions stimulate in him. An artiste achieves his goals through distortion,...
6 Pages(1500 words)Case Study

...JOYCE`S THE DEAD James Joyce’s story “The Dead” is similar to many of the other stories in the collection Dubliners in which the dead figuratively haunt living people. In one story, “The Sisters,” a boy is haunted by a person who has influenced his life. Many other stories feature narratives about the dead that do not disappear from our lives, but are present in them sometimes for good and sometimes for ill. This story in particular shows us how the dead continue to colour the lives of the living, no matter how much they might try to blot them out.             At the beginning of this story Gabriel Conroy and his wife, Gretta, go to an annual dance hosted by Kate and Julian Morkan. During the course of the evening, Gretta... THE DEAD James...
4 Pages(1000 words)Essay

...The Twentieth Century KATHE KOLLWITZ You will find the Käthe Kollwitz Museum in Berlin. If you are uncomfortable with German, click either the English or the French buttons at the bottom of the page. Write about Kollwitz’s background. Answer- Kathe Kollwitz comes from a very humbling background. She was born in East Prussia. From birth, Kathe has traveled to many different areas in pursuit of her passion for art. Despite her passion for art, Kathe takes on the role of a wife and a mother of two. She does not let her passion for art become interrupted by being a wife and mother, as she continues to teach about art. Not only does Kathe continue to teach art, she also explores different forms of art such as...
2 Pages(500 words)Essay

The Causes of the Vietnam War

...The Causes of the Vietnam War Introduction The Vietnam War, as it unfolded and drew to a bloody end with the emergence of detente, was one of the most important wars that the world has ever seen. Although it is small in regard to the limited geographic involvement and the force used, there lies the fact that over two million Vietnamese and 58, 219 Americans lost their lives.1 This number is staggering in itself for a war that primarily involved three countries. In addition, the consequence of the war and its result over the political development in the region and further conflicts made it the most significant conflict in the twentieth century. After World War II, Ho Chi Minh launched a guerilla movement in Indochina to counter... . This...
16 Pages(4000 words)Research Paper
sponsored ads
Save Your Time for More Important Things
Let us write or edit the essay on your topic "Vietnam and the Twentieth Century Experience" with a personal 20% discount.
GRAB THE BEST PAPER

Let us find you another Essay on topic Vietnam and the Twentieth Century Experience for FREE!