(research on why) John Quincy Adams was consider the best Secretary of State in U.S. History - Essay Example

Comments (0)
Add to wishlistDelete from wishlist
Cite this document
Summary
Throughout the history of United States, John Quincy Adams’s service as a Secretary of State in the Cabinet of President James Monroe (1817-1825) was believed to be the greatest (Herring, 2008: 129). In fact, Adams was regarded as the best Secretary of State of all times. His…
Download full paperFile format: .doc, available for editing
HIDE THIS PAPERGRAB THE BEST PAPER92.9% of users find it useful 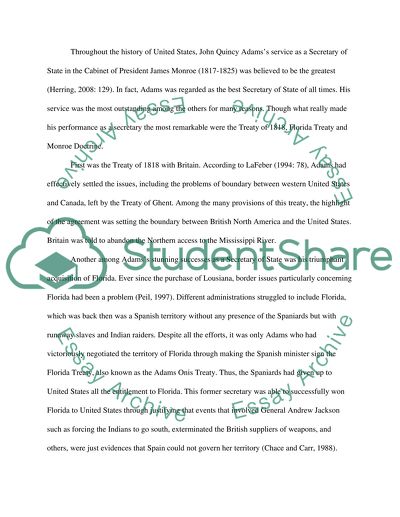 Extract of sample "(research on why) John Quincy Adams was consider the best Secretary of State in U.S. History"

John Quincy Adams: The Greatest Secretary of in United s Outline Paragraph John Quincy Adams as the Greatest Secretary of in U.S.
Paragraph 2: The Treaty of 1818
Paragraph 3: Florida Treaty
Paragraph 4: Monroe Doctrine
Paragraph 5: Conclusion
Throughout the history of United States, John Quincy Adams’s service as a Secretary of State in the Cabinet of President James Monroe (1817-1825) was believed to be the greatest (Herring, 2008: 129). In fact, Adams was regarded as the best Secretary of State of all times. His service was the most outstanding among the others for many reasons. Though what really made his performance as a secretary the most remarkable were the Treaty of 1818, Florida Treaty and Monroe Doctrine.
First was the Treaty of 1818 with Britain. According to LaFeber (1994: 78), Adams had effectively settled the issues, including the problems of boundary between western United States and Canada, left by the Treaty of Ghent. Among the many provisions of this treaty, the highlight of the agreement was setting the boundary between British North America and the United States. Britain was told to abandon the Northern access to the Mississippi River.
Another among Adams’s stunning successes as a Secretary of State was his triumphant acquisition of Florida. Ever since the purchase of Lousiana, border issues particularly concerning Florida had been a problem (Peil, 1997). Different administrations struggled to include Florida, which was back then was a Spanish territory without any presence of the Spaniards but with runaway slaves and Indian raiders. Despite all the efforts, it was only Adams who had victoriously negotiated the territory of Florida through making the Spanish minister sign the Florida Treaty, also known as the Adams Onis Treaty. Thus, the Spaniards had given up to United States all the entitlement to Florida. This former secretary was able to successfully won Florida to United States through justifying that events that involved General Andrew Jackson such as forcing the Indians to go south, exterminated the British suppliers of weapons, and others, were just evidences that Spain could not govern her territory (Chace and Carr, 1988).
Moreover, another striking achievement of Adams was the Monroe Doctrine in 1823. Indeed, this doctrine had the name of the president on it but Adams was primarily the author of the said policy. According to LaFeber (1994) and Tremblay (2004: 133-134) , the Monroe Doctrine stated that the United States of America would consider all efforts of the European powers to colonize or interfere with the states inside the boundaries of America as forms of offense. Thus, the United States should intervene in all the kinds of invasion by the European countries. This policy was a mechanism serving as prevention from any attempts of the European worlds of taking over the Spanish colonies. For Adams (1821), this doctrine only showed that America was never for armed interference but for a principled support for independent movements. In this regard, Adams designed a doctrine which had been a very significant strategy in the foreign policy of the United States. His strategic planning on addressing the issues of boundaries did not only benefit Monroe’s supremacy but also his administration when he had become the president, and as well as those of the several presidents of United States that came after him.
Indeed, John Quincy Adams, during his service as a Secretary of State in the Monroe Administration, had achieved the most notable accomplishments which were not even exceeded by the other Secretaries of States throughout the history of United States. He, being a great thinker as well as a great leader, had definitely contributed advantageous approaches that greatly assisted the welfare of America. He was just a Secretary of State that time but his major achievements had gone beyond the other secretaries’ and even those of the presidents.
References:
Adams, John Quincy (1821) Speech to the U.S. House of Representatives on foreign policy, Miller Center of Public Affairs, University of Virginia. Available: http://millercenter.org/scripps/archive/speeches/detail/3484 [7 Jan 2011]
Chace, James and Carr, Caleb (1988) The odd couple who won Florida and half the West. (Andrew Jackson and John Quincy Adams) Smithsonian. Available: http://www.accessmylibrary.com/coms2/summary_0286-5452955_ITM [7 Jan 2011]
Herring, George C. (2008). From colony to superpower: U.S. foreign relations since 1776, 1st edition, Oxford University Press.
LaFeber, Walter (1994) The American age: U.S. foreign policy at home and abroad 1750 to the present, 2nd edition, New York: W.W. Norton & Company.
Peil, Michael (1997) Biography of John Quincy Adams. Available: http://www.law.cornell.edu/background/amistad/adamsbio.html [7 Jan 2011]
Tremblay, Rodrigue (2004) The new American empire, Infinity Publishing. Read More
Share:
Tags
Cite this document
(“(research on why) John Quincy Adams was consider the best Secretary of Essay”, n.d.)
(research on why) John Quincy Adams was consider the best Secretary of Essay. Retrieved from https://studentshare.org/history/1587354-research-on-why-john-quincy-adams-was-consider-the-best-secretary-of-state-in-us-history

“(research on Why) John Quincy Adams Was Consider the Best Secretary of Essay”, n.d. https://studentshare.org/history/1587354-research-on-why-john-quincy-adams-was-consider-the-best-secretary-of-state-in-us-history.
Comments (0)
Click to create a comment or rate a document

CHECK THESE SAMPLES OF (research on why) John Quincy Adams was consider the best Secretary of State in U.S. History

...?John Quincy Adams In his desire to impart to humanity a type of governance or philosophy which bore principles and execution patterned after those of his father, John Quincy Adams strove to master himself and surpass the weaker side of his nature as he more than dutifully served the U.S. nation. President John F. Kennedy did highlight his prominence on being a Federalist for the Massachusetts Legislature and the U.S. Senate and a president with a profound sense of independence besides his vast experience as a minister, an emissary, and a member in congress, yet these achievements had not been sufficient for J.Q....
2 Pages(500 words)Article

... U.S. History 28 April John Adams John Adams never managed to match the popularity of such leaders of American Revolution as Benjamin Franklin, George Washington, and Thomas Jefferson. During his political career, he was regarded by the contemporaries as vain politician who, despite his patriotism, lacked political tact and charisma (Wood 177). The accomplishments of Adams will be reviewed in this essay, but in order to understand his political and philosophical development, a brief outline of his general background will be necessary. John Adams was born in Quincy, Massachusetts on 30 October 1735, in the family of a farmer, John Adams, who was a town councillor. His family was rather modest, and his simple habits were typical... of the...
3 Pages(750 words)Research Paper

Who was the best secretary of state and why

...?Who was the best secretary of and why America was blessed with the services of eminent and capable personalities as the secretary of forthe last few centuries. The challenges faced by these secretaries of states were of different kinds and most of them demonstrated their capabilities when they faced challenging situations. It is difficult to rate any one above others because of the diversity of problems faced and managed by these secretaries in the past. John Quincy Adams, William Seward John Hay, Henry Kissinger, Collin Powel and Medline Albright were...
3 Pages(750 words)Research Paper

The Life of John Adams

...managed to enter Harvard in 1755. He started his career as school teacher and switched to study law under James Putnam. He served as successful lawyer in Boston for a decade. John Adams married Abigail Smith (1744-1818) and fathered four, the eldest of whom is John Quincy Adams, the sixth President of the United States of America. The couple shared a unique intellectual companionship and the letters exchanged between them are preserved till date as a strong proof for lovable camaraderie. Contribution to the American Revolution John Adam plunged into politics angered by the oppressive acts of the British...
3 Pages(750 words)Research Paper

...? John Adams and Abigail Adams John Adams was the second president of United s who made efforts in the revolution. It will not be incorrect to state that he was one of the most important personalities among founding fathers of United States. He has played a number of roles in the revolution for United States including diplomat, lawyer, statesman etc. The reason behind his contribution to United States was the support he got from his family. It should be noted that John Adams family was also involved in fighting for revolution. This is evident from the contributions made by Abigail Adams, wife of John Adams. John Adams and Abigail Adams, as a couple, have been researches upon in the past because of their tremendous duo performance... ...
5 Pages(1250 words)Essay

Secretary of State for Defence

...enacted to deport the foreign-born people living in the presidency of the Adams. Opponents of Adams were concerned with the reputation of Adams, and tried to bring him out of the office. This kind of problems is not created when all people who are authorized to approve the laws with consultation of all members. However, Adams the successor of the Washington asserted a prime example of the presidency and shaped the history. John Adams had to fight with different forces. There was a divisive, political environment, and Federalists adopted an anti Adams agenda. Adams had to fight a quasi...
3 Pages(750 words)Essay

..., 2005). Work citied Greenberg, Brian, and Linda S. Watts. Social History of the United States. Santa Barbara, Calif: ABC-CLIO, 2009. print. Hamilton, Neil A. The 1970s. New York: Facts On File, 2006. Internet resource. Horowitz, Daniel. Jimmy Carter and the Energy Crisis of the 1970s: The "crisis of Confidence" Speech of July 15, 1979 ; a Brief History with Documents. New York, NY [u.a.: Bedford/St. Martins, 2005. Print.... judiciary, welfare and cold war. He put the country on a fundamentally different path, as the country was ready for it advocating for accountability of the government operations. He focused into the people feelings by enhancing an optimism. The vision was an accurate portrayal. Liberal Americans lament the Reagans...
2 Pages(500 words)Admission/Application Essay

...Secretary of the Treasury Alexander Hamilton Alexander Hamilton was appointed the Secretary of the Treasury in 1789and he initiated the creation of the first American bank to manage issues surrounding credit money. Low collection of taxes among the 13 states forced the U.S. Secretary of State to create a system that allowed the states to access funds by selling debt to Americans (Sharma 29). The concept increased the quantity of money in circulation as lenders would benefit from interests and borrowers would easily access credit in a proportioned manner. Thus, Hamilton created a system that allowed public and private to access credit by...
1 Pages(250 words)Essay
sponsored ads
Save Your Time for More Important Things
Let us write or edit the essay on your topic "(research on why) John Quincy Adams was consider the best Secretary of State in U.S. History" with a personal 20% discount.
GRAB THE BEST PAPER

Let us find you another Essay on topic (research on why) John Quincy Adams was consider the best Secretary of State in U.S. History for FREE!