Describe the interplay between British actions&colonial responses that led up to the American Revolutionary War. Whydidn't war erupt in the ten years prior to 1775 Once independent, what central issue did the new US face&how did they deal with it - Essay Example

Comments (0)
Add to wishlistDelete from wishlist
Cite this document
Summary
This paper looks at the scenes that developed the revolution war that led to America’s independence in 1776 and the successive events that followed. In particular, this article does look at the events that made the war to begin, scenarios that made the war stall for nearly 20…
Download full paperFile format: .doc, available for editing
HIDE THIS PAPERGRAB THE BEST PAPER98.9% of users find it useful 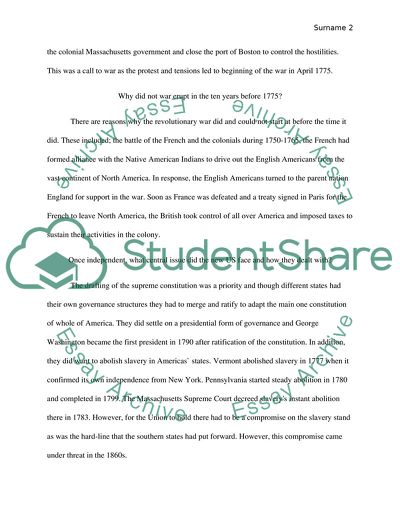 Extract of sample "Describe the interplay between British actions&colonial responses that led up to the American Revolutionary War. Whydidn't war erupt in the ten years prior to 1775 Once independent, what central issue did the new US face&how did they deal with it"

Task Colonial Actions and Responses Leading to War and Immediate Issue Addressed In the US. This paper looks at the scenes that developed the revolution war that led to America’s independence in 1776 and the successive events that followed. In particular, this article does look at the events that made the war to begin, scenarios that made the war stall for nearly 20 years before it could begin, and the main issue that was of concern soon after attainment of independence.
British actions & colonial responses that led up to the American Revolutionary War
There are various actions that the British colonial masters carried out and imposed towards the colonies that led to the uprising from the colonials in America. These actions mostly were taxed based, example the Stamp and Townshend Acts in 1765 and 1767 respectively tried to tap colonial business by requiring authorized stamps on transactions. Though it led to protest the British masters did repeal it in 1766 to quell the protesters but they did try to find a way to finance their troops and governance inside the colony but they never succeeded. Years of increasingly virulent protests forced England to repeal the taxes in 1771. The passing of a new Tea Act in December 1773, made a group of Boston activists dump 342 casks of English tea into Boston Harbor. This led to the English parliament passing a series of "Coercive Acts" to weaken the colonial Massachusetts government and close the port of Boston to control the hostilities. This was a call to war as the protest and tensions led to beginning of the war in April 1775.
Why did not war erupt in the ten years before 1775?
There are reasons why the revolutionary war did and could not start at before the time it did. These included; the battle of the French and the colonials during 1750-1765, the French had formed alliance with the Native American Indians to drive out the English Americans from the vast continent of North America. In response, the English Americans turned to the parent nation England for support in the war. Soon as France was defeated and a treaty signed in Paris for the French to leave North America, the British took control of all over America and imposed taxes to sustain their activities in the colony.
Once independent, what central issue did the new US face and how they dealt with?
The drafting of the supreme constitution was a priority and though different states had their own governance structures they had to merge and ratify to adapt the main one constitution of whole of America. They did settle on a presidential form of governance and George Washington became the first president in 1790 after ratification of the constitution. In addition, they did want to abolish slavery in Americas` states. Vermont abolished slavery in 1777 when it confirmed its own independence from New York. Pennsylvania started steady abolition in 1780 and completed in 1799. The Massachusetts Supreme Court decreed slaverys instant abolition there in 1783. However, for the Union to hold there had to be a compromise on the slavery stand as was the hard-line that the southern states had put forward. However, this compromise came under threat in the 1860s.
Works Cited
Bailyn, Bernard. The Ideological Origins of the American Revolution. Cambridge, Mass:
Harvard University Press, 1967. Print
Calloway, Colin. The American Revolution in Indian Country: Crisis and Diversity in Native American Communities. Cambridge, U.K.: Cambridge University Press, 1995.Print
Wood, Gordon S. The Radicalism of the American Revolution. New York: Vintage Books, 1993. Print
Young, Alfred F. The Shoemaker and the Tea Party: Memory and the American Revolution. Boston: Beacon Press, 1999. Print Read More
Share:
Tags
Cite this document
(“Describe the interplay between British actions&colonial responses that Essay”, n.d.)
Retrieved de https://studentshare.org/history/1587224-describe-the-interplay-between-british-actionscolonial-responses-that-led-up-to-the-american-revolutionary-war-whydidnt-war-erupt-in-the-ten-years-prior-to-1775-once-independent-what-central-issue-did-the-new-us-facehow-did-they-deal-with-it

(Describe the Interplay Between British actions&Colonial Responses That Essay)
https://studentshare.org/history/1587224-describe-the-interplay-between-british-actionscolonial-responses-that-led-up-to-the-american-revolutionary-war-whydidnt-war-erupt-in-the-ten-years-prior-to-1775-once-independent-what-central-issue-did-the-new-us-facehow-did-they-deal-with-it.

“Describe the Interplay Between British actions&Colonial Responses That Essay”, n.d. https://studentshare.org/history/1587224-describe-the-interplay-between-british-actionscolonial-responses-that-led-up-to-the-american-revolutionary-war-whydidnt-war-erupt-in-the-ten-years-prior-to-1775-once-independent-what-central-issue-did-the-new-us-facehow-did-they-deal-with-it.
Comments (0)
Click to create a comment or rate a document

CHECK THESE SAMPLES OF Describe the interplay between British actions&colonial responses that led up to the American Revolutionary War. Whydidn't war erupt in the ten years prior to 1775 Once independent, what central issue did the new US face&how did they deal with it

...of 1766, that it had the authority to tax the colonies (Bobrick 15). This paper is a critical evaluation of the economic factors, which pushed the colonies to rebel against Great Britain and demand for independence. Economic Factors that Led to the American War of Independence (1775-1783) The War of Independence, or the American Revolutionary War, is a war, which was fought between Great Britain and 13 American colonies between the...
8 Pages(2000 words)Research Paper

...Task American Revolutionary War Introduction American Revolutionary War commenced in the year 1775, due to various issues that emerged in various countries. It involved a union of 13 colonies and Great Britain. Conflicting subjects concerning the manner in which Great Britain conducted its activities inside the colonies that it had managed to capture triggered the warfare. This is because the colonies contemplated on being treated in a better manner that portrayed humanity. The feelings of having privileges similar to those of Englishmen...
5 Pages(1250 words)Research Paper

'Human security should be seen as a higher priority in international politics than state/national security'. Do you agree

...? Yorktown-American Revolutionary War Yorktown-American Revolutionary War Part Yorktown 1781- Overview of Campaign The battle of Yorktown was all about America’s revolution in a bid to become an independent state. The battle is said to have began in 1775 and ended in 1783 following the surrender of British troops and German allies1. The actual war was is said to have begun on September 28 when American forces under the leadership of General George Washington together with its French-allied forces led by Comte de Rochambeau hatched a plan...
3 Pages(750 words)Essay

...as traitors. The public wrath against the loyalists declined in the 1790s and they could again reenter the American mainstream society. Violence against them ceased, although laws against them remained unchanged till the War of 1812.3 The British faced many military limitations to retain the loyalist’s support like they could not use harsh measures to suppress rebellions. This was an advantage for the patriots, although many neutral colonists were forced to join the ranks of the Revolutionaries. II. What role did women and Native Americans play in the Revolution? The American...
8 Pages(2000 words)Essay

The US-led war in Iraq

... by the United Nation. This led to the Iraq war between the United States and Iraq. Iraq’s dictator was overthrown in this war after the invasion had taken place. The country was left under the control of Coalition Provisional Authority (CPA) that handled the governmental affairs of the country, which later led to the formation of the government (Serena, 81). The Iraqi interim Government took over after the CPA was disbanded in June 2004. The transitional government later took over after the election was held in January 2005 and in September the countries constitution was completed. December of the same year marked another election that initiated a four-year government, which took over power in March 2006, and was in accordance... ...
3 Pages(750 words)Essay

...and throwing off the bounds of British colonialism. Through understanding this group and the mechanisms by which it spread and sought to create a newfound colonial identity, the reader can come to a more informed understanding with regards to the way in which the Sons of Liberty, and groups like it, were absolutely pivotal in determining the course of action that would take place leading up to and including the Revolutionary War period. Firstly, in seeking to understand the Sons of Liberty, it must be understood that this particular group of patriots were ultimately formed as a means of seeking to promote an understanding an...
4 Pages(1000 words)Essay

Ruins of the Second Gilded Age

...Major Issues and Events That Led To the Outbreak of the American Revolution According to Tindall and Shi (213-214), the signing of the Declaration of Independence made the America colonialists to be rebellious. In contrast, the colonists wanted to know the main purpose of the revolt. Revolution made Americans to be able to make choices for themselves. As a result, Americans became enemies of Great Britain which was the colonists after being declared an independent state. America became independent from the hands of British authority on the battlefield. In contrast, a few of the...
2 Pages(500 words)Essay

...﻿The American Revolutionary War Introduction The American Revolutionary War was of significance because its conclusion marked the beginning of a new country that would eventually become the greatest economic and military force in human history. The outcome was nothing less than miraculous given the overwhelming advantage of the British military, from the Expeditionary to the Parliament Forces, enjoyed at the outset of the war. Because of this, the war was of great historical significance from a military perspective. This discussion will examine the causes that initiated Britain’s War with the Colonies and question how could a group of colonies spread out over a vast region with no central government or treasury and an army... of these...
8 Pages(2000 words)Research Paper
sponsored ads
Save Your Time for More Important Things
Let us write or edit the essay on your topic "Describe the interplay between British actions&colonial responses that led up to the American Revolutionary War. Whydidn't war erupt in the ten years prior to 1775 Once independent, what central issue did the new US face&how did they deal with it" with a personal 20% discount.
GRAB THE BEST PAPER

Let us find you another Essay on topic Describe the interplay between British actions&colonial responses that led up to the American Revolutionary War. Whydidn't war erupt in the ten years prior to 1775 Once independent, what central issue did the new US face&how did they deal with it for FREE!