Comments (0)
Add to wishlistDelete from wishlist
Cite this document
Summary
So the creation of a self regulating market in copyrighted goods requires state intervention to create and maintain that market, Polanyi and Karl (1944). Self-regulating market…
Download full paperFile format: .doc, available for editing
HIDE THIS PAPERGRAB THE BEST PAPER95.1% of users find it useful 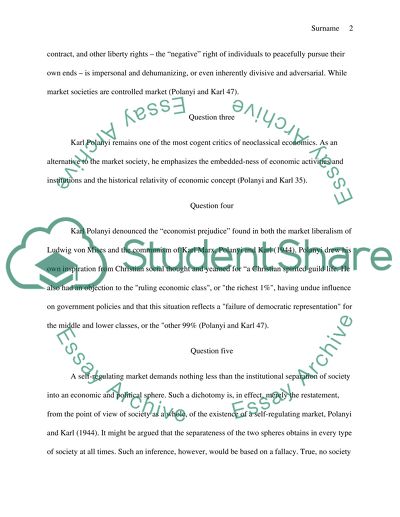 CHECK THESE SAMPLES OF Adam Smith and Karl Polanyi

...?Running Head: ADAM SMITH Inserts His/Her Inserts Grade Inserts Adam Smith Economics has been a prominent subject and a school of thought in practical as well as theoretical viewpoint. The subject is the field of social science which pertains to the analysis of the distribution, production and consumption of services and goods. The behaviour of the economy and its interaction with the agents and actors of the economic system of a particular country has been noted and studied by various economists. This paper shall discuss one of the most noted and prominent economists, along with his contribution, background, and school of thought for the subject. Adam...
4 Pages(1000 words)Term Paper

...? Topic: Lecturer: Presentation: Introduction Economic deals with study of human nature hence most theories ineconomic are based on the nature of humans. Adam Smith and Karl Marx are considered as the greatest economists of their time, in fact Smith is regarded as the father of modern economics (Skousen, 3). Most of the theories in economics today are based on the ideas of Smith as well as Marx and Keynes. These individuals have different ideas on how the economy works and the best economic system that would ensure the good of all people in the society. They also differ on the role the government is supposed to take to drive the economy to prosperity. All...
4 Pages(1000 words)Essay

Who was Adam Smith

... of the Adam Smith is an economist and a of a number of prominent books, such as The Nature and Causes of the Wealth of Nations written in 1776. He theorized a system, which fixed essential principles of economics and its operations (Smith (a), n. d.).  His book explicates the relation of supply and demand and the ideation of division of labour forces in the industrial period, which accorded him such distinction that catapulted him to the Board of Customs in Scotland. This historic distinction later became an anthropological and historical interest for those who would visit Edinburgh (Smith (b), n. d.). Smith was born in Scotland and got education in Glasgow. He also spent his academic life in Oxford and gained extensive knowledge... on...
4 Pages(1000 words)Essay

...always been embedded in the society (Polanyi 13). The embed concept expresses the idea that the economy is never autonomous, but subordinated to religion, politics and social relations, which is synonymous with Machiavelli. Polanyi also believes that the state has a significant role in the economy; even though the market is supposed to self-regulating, the state has to be involved in ongoing role in order to avoid the dangers of inflation and deflation (Polanyi 16). Works cited Fitzgibbons, Athol. Adam Smith's System of Liberty, Wealth, and Virtue: The Moral and Political Foundations of the Wealth of Nations. Oxford: Clarendon Press, 1995. Print. Gudz,...
3 Pages(750 words)Essay

...? Adam Smith vs. Samuel Smiles Adam Smith was an 18th Century of logic and philosophy who had immense interests in the workings of economies all over the world, and their impact on people’s lives. Smith’s best works are exhibited in his 1776 publication followed by Wealth of Nations, which rightly addresses the notion of economic liberalism. According to Smith, this entailed a non-interference or hands-off approach by authorities/governments towards private enterprise. His postulates were geared towards advocacy for the establishment of a laissez faire trade policy both on the local and international scene. Samuel Smiles is another free...
4 Pages(1000 words)Essay

Markets As A Form Of Production, Use And Consumption.The Meaning Of Property And Water Rights

...is closely aligned with the concept of reciprocation and redistribution as viewed by Polanyi and Heilbroner though the latter two are not primarily against private ownership of land and other resources. Works Cited Marx, Karl. Selected writings. Ed. David McLellan, Oxford University Press , (Provided by the customer). Polanyi, Karl, The Great Transformation. Beacon Press: Boston (Provided by the customer). Heilbroner, Robert L. The Worldly Philosophers. 6th Edition. Simon & Schuster: New York (Provided by the customer). Smith, Adam. An inquiry into the nature and causes of the wealth of nations. T. Nelson: Original from...
8 Pages(2000 words)Article

...Adam Smith & John Maynard Keynes. Adam Smith and John Maynard Keynes are great economists. Their economic theories did not have much in common, however, no one can deny the impressive influence Smith and Keynes had on the policies of their times and even on the theoretical positions of their most vocal opponents. What is more, John Maynard Keynes and Adam Smith offered more than economic theory; they proposed policy solutions to the existing economic problems. These solutions were developed in order to improve macroeconomic performance and national prosperity. As Wesley Mitchell put it, Smith sought to convince people that "the wealth of a nation would be promoted with vastly greater effectiveness by the ‘obvious and simple system... of...
10 Pages(2500 words)Literature review

...Adam Smith Today Adam Smith is recognized as one of the foremost economist of the modern world. In his text the Wealth of Nations, Smith established a view of economic structures that has since come to be recognized and adopted by world nations as capitalism. While Smith’s theories proved widely prescient, in some regards they clung to an overly idealistic articulation of world processes. This essay examines Smith’s understanding of capitalism and demonstrates why his ideals cannot entirely be followed in the modern world. In the Wealth of Nations Smith established a pure view of capitalism. Perhaps...
2 Pages(500 words)Essay

...DVISION OF LABOR: ADAM SMITH By Division of Labor: Adam Smith Division of labor has, to a great extent, improved production levels and efficiency of organizational structures. Division of labor enables specialization hence better performance from the workforce due to experience gained over recurrence of the same tasks. However, efficiency of division of labor is dependent on several factors. With division of labor, each department has increased dexterity, more time is saved and advancements in technology hence improving departmental production and consequently production of the entire organization. Several factors such as necessity can be attributed as the driving forces...
5 Pages(1250 words)Essay
sponsored ads
Save Your Time for More Important Things
Let us write or edit the essay on your topic "Adam Smith and Karl Polanyi" with a personal 20% discount.
GRAB THE BEST PAPER

Let us find you another Essay on topic Adam Smith and Karl Polanyi for FREE!