Comments (0)
Add to wishlistDelete from wishlist
Cite this document
Summary
He was the ruler of the Huns from 434 until his death in 453. Attila became well-known as one of the most ruthless rulers that the world had ever seen, a man who refused to let…
Download full paperFile format: .doc, available for editing
HIDE THIS PAPERGRAB THE BEST PAPER92.9% of users find it useful 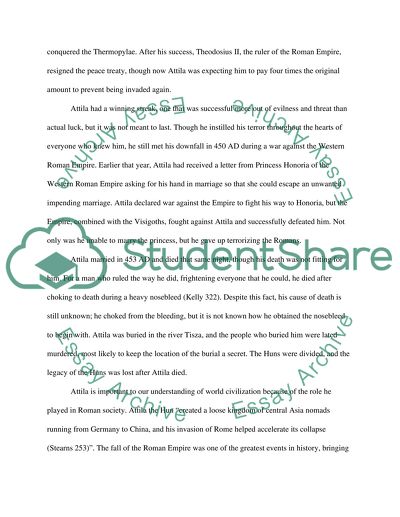 Extract of sample "Attila the Hun"

The Life and Times of Attila the Hun Attila, though more commonly referred to as Attila the Hun, was born in 406 AD in Central Asia. He was the ruler of the Huns from 434 until his death in 453. Attila became well-known as one of the most ruthless rulers that the world had ever seen, a man who refused to let anything or anyone get in his way. Attila’s threatening countenance towards the Romans, as well as to those close to him, is what set Attila in the history books. He left behind a never-ending legacy of heartlessness and viciousness, taking down everyone that stood in the way of his personal victory.
Very little is known about Attila’s childhood except that, at the young age of twelve, he was sent to the Roman Court as a child hostage (Matyszak 14). A child of the Romans was sent to the Huns in Attila’s place. When he was twenty-seven years old, Attila’s uncle, Rugila, died and left Attila and Attila’s brother, Breda, the Empire of the Huns. Prior to Rugila’s death, to prevent the Huns from invading, Rugila made it a requirement of the Romans to annually pay the Huns money. When Attila and Breda took over the empire after Rugila’s death, the Romans ceased paying the money, prompting Attila to invade the Eastern Roman Empire. Attila’s fierceness motivated the Romans to never miss a payment again, though they had to start paying double the original amount.
After Attila’s success in making it clear to the Romans that he was the man in charge, he then decided that the same should also apply to his brother. Tired of sharing his rule, Attila and his allies murder Breda. With nobody standing in his way of being the emperor, Attila had no problem taking complete charge of his empire and the surrounding areas. To make his strength known among others, Attila raided the Eastern Roman Empire once again, in 447 AD and conquered the Thermopylae. After his success, Theodosius II, the ruler of the Roman Empire, resigned the peace treaty, though now Attila was expecting him to pay four times the original amount to prevent being invaded again.
Attila had a winning streak, one that was successful more out of evilness and threat than actual luck, but it was not meant to last. Though he instilled his terror throughout the hearts of everyone who knew him, he still met his downfall in 450 AD during a war against the Western Roman Empire. Earlier that year, Attila had received a letter from Princess Honoria of the Western Roman Empire asking for his hand in marriage so that she could escape an unwanted impending marriage. Attila declared war against the Empire to fight his way to Honoria, but the Empire, combined with the Visigoths, fought against Attila and successfully defeated him. Not only was he unable to marry the princess, but he gave up terrorizing the Romans.
Attila married in 453 AD and died that same night, though his death was not fitting for him. For a man who ruled the way he did, frightening everyone that he could, he died after choking to death during a heavy nosebleed (Kelly 322). Despite this fact, his cause of death is still unknown; he choked from the bleeding, but it is not known how he obtained the nosebleed to begin with. Attila was buried in the river Tisza, and the people who buried him were lated murdered, most likely to keep the location of the burial a secret. The Huns were divided, and the legacy of the Huns was lost after Attila died.
Attila is important to our understanding of world civilization because of the role he played in Roman society. Attila the Hun “created a loose kingdom of central Asia nomads running from Germany to China, and his invasion of Rome helped accelerate its collapse (Stearns 253)”. The fall of the Roman Empire was one of the greatest events in history, bringing about many important changes to that part of the world. To understand Attila and his atrocious rule is to understand what aided the Roman Empire in its collapse.
Works Cited
Kelly, Christopher. The End of Empire: Attila the Hun and the Fall of Rome. New York: W.W. Norton & Co., 2009. Print.
Matyszak, Philip. The Enemies of Rome: From Hannibal to Attila the Hun. New York: Thames & Hudson, 2009. Print.
Stearns, Peter N.. World Civilizations: The Global Experience. 4th ed. New York: Pearson Longman, 2004. Print. Read More
Share:
Tags
Cite this document
(“Attila the Hun Term Paper Example | Topics and Well Written Essays - 500 words”, n.d.)
Retrieved from https://studentshare.org/history/1581852-attila-the-hun

CHECK THESE SAMPLES OF Attila the Hun

.... One important conclusion of the study is the lesson that ethics, leadership, and irrational behaviors can be categorized as positive factors that can help a leader continuously improve himself, his performance and the performance of the organization by looking at the mistakes as challenges. Works Cited Brafman, O. and Brafman, R. (2009). Sway: The Irresistable Pull of Irrational Behavior. Doubleday. Caldwell, C., Hayes, L.A., Karri, R. and Bernal, P. (2008). Ethical Stewardship – Implications for Leadership and Trust. Journal of Business Ethics 78(1) 2008, 153-164. Heine, S. (2008). From Art of War to Attila the Hun: A Critical Survey of Recent Works on Philosophy/Spirituality and Business Leadership....
6 Pages(1500 words)Essay

....” (Bitel, 2009, pp. 69-70) Reading between the lines of the Vita Genovefa it seems that she had many followers but that she also made many enemies. When Germanius returns a second time on the same route towards his pastoral duties in Britain, he asks after her and hears some unflattering comments about her. He locates her in her private cell and points out that she has turned the ground to mud with her tears, implying that she is much too good for this ungrateful people who do not recognize her spiritual stature. One of the feats for which Genovefa is most fondly remembered is that of prayer. When the feared Attila the Hun is rumoured to be approaching the city, Genovefa gathers the older women of the...
8 Pages(2000 words)Essay

Political, Social and Economic Reasons for the Decline of the Western Roman Empire

..., and economic factors for the decline of the mighty Western Roman Empire. The political reasons surround the Barbarians, wars with Germanic tribes, City of God, growing power of Attila the Hun and the Hunnic Empire, and eventually the fall of the Western Roman Empire. In 15 AD the army of Garmanicus Caesar marched to Teutobergensis Saltus, where six years ago three whole Roman legions of about twenty thousand men were killed in the battle of antiquity (Heather 46). The massacre had been performed by the joint coalition of German warriors. The Germanic groups spread all the way from Rhine in the west to River Vistula in the east and from Danube in the north to the Baltic seas in the south (Heather 49)....
4 Pages(1000 words)Essay

Defining heroes: The whats, whos and whys of heroism

...the dictum: 'I will give you the keys of the kingdom of Heaven. What you forbid on earth shall be forbidden in heaven, and what you allow on earth shall be allowed in heaven." In 410 came the sack of Rome by Alaric and his Visigoths while Emperor Honorius and Pope Innocent I were at Ravenna. Buildings were not destroyed and Alaric was happy with the booty. Huns, Vandals and Visigoths continued to undermine the royal power and slowly the power diminished giving an opportunity to Ambrose in Milan to almost control the imperial authority. In 452, Attila the Hun was the biggest threat to Christianity and Papacy and Gaiseric the Vandal was not far behind. Leo had to take diplomatic steps to...
5 Pages(1250 words)Essay

Lessons of the Cold War

The rise of Christianity was important to the growth of the late Roman period. How did the Church help continue civilization after the fall of the Western Empire

..., Beethoven, and Verdi. The government of the Catholic Church was critically involved in the political system of Europe. This was when Pope Leo the Great and Attila the Hun met in 452 and the Pope insisted him to turn his Italy invasion back. Pope Leo III made Charlemagne the King of the Romans when the Holy Roman Empire was founded, Pope Clement VII refused to terminate Henry VIII’s marriage, and Pope John Paul II accelerated the Europe Collapse of Communism. These conflicts between the popes and princes have been greatly seen in the Western politics but the Church government had a stand to act as a peace broker. There have also been critics who criticized the effect that the church had on the...
5 Pages(1250 words)Research Paper

1 Pages(250 words)Essay
sponsored ads
Save Your Time for More Important Things
Let us write or edit the term paper on your topic "Attila the Hun" with a personal 20% discount.
GRAB THE BEST PAPER

Let us find you another Term Paper on topic Attila the Hun for FREE!