What issues were resolved by the Compromise of 1850 Who benefited more from its terms, the North or the South Why - Research Paper Example

Comments (0)
Add to wishlistDelete from wishlist
Cite this document
Summary
Slavery became the most significant point of division between the Northern States, and those in the South and the Compromise of 1850 was intended to resolve this issue, and thus also other potential sources of potential conflict between North and South.
In 1787, slavery was…
Download full paperFile format: .doc, available for editing
HIDE THIS PAPERGRAB THE BEST PAPER94.3% of users find it useful 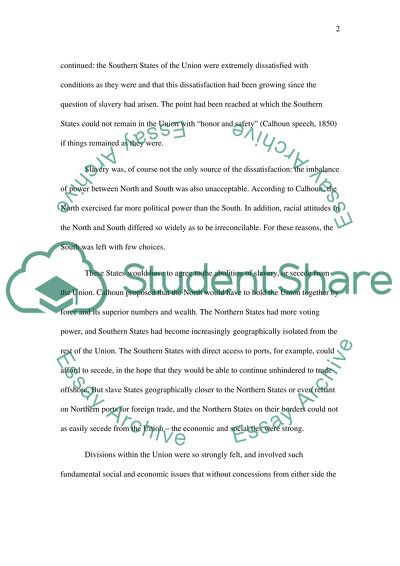 Extract of sample "What issues were resolved by the Compromise of 1850 Who benefited more from its terms, the North or the South Why"

ID What issues were resolved by the Compromise of 1850? Who benefited more from its terms, the North or the South? Why? Slavery became the most significant point of division between the Northern States, and those in the South and the Compromise of 1850 was intended to resolve this issue, and thus also other potential sources of potential conflict between North and South.
In 1787, slavery was recognized in the Constitution (General History of the United Sates Supreme Court, 2011). Slavery was not regulated within States through Congress. Slavery was, then, accepted as a fact which existed within States, and the Federal Government restricted its involvement in the affairs of individual States.
By 1847, however, the Courts of the United States were declaring that the Constitution was ultimate, and that slavery was a political, not a legal issue (Jones v. Van Zandt, 1847: General History of the United Sates Supreme Court, 2011)). The Missouri Compromise – which declared that Congress could exclude slavery from Missouri Territory north of the 36-degree, 30-minute line – meant that the political, rather than the legal battle about slavery had started.
The Southern States, represented in the feelings of John Calhoun, felt as if they had been disadvantaged: “… the fact that the equilibrium between the two sections in the government as it stood when the Constitution was ratified and the government put in action has been destroyed.” (Calhoun speech, 1850). He continued: the Southern States of the Union were extremely dissatisfied with conditions as they were and that this dissatisfaction had been growing since the question of slavery had arisen. The point had been reached at which the Southern States could not remain in the Union with “honor and safety” (Calhoun speech, 1850) if things remained as they were.
Slavery was, of course not the only source of the dissatisfaction: the imbalance of power between North and South was also unacceptable. According to Calhoun, the North exercised far more political power than the South. In addition, racial attitudes in the North and South differed so widely as to be irreconcilable. For these reasons, the South was left with few choices.
These States would have to agree to the abolition of slavery, or secede from the Union. Calhoun proposed that the North would have to hold the Union together by force and its superior numbers and wealth. The Northern States had more voting power, and Southern States had become increasingly geographically isolated from the rest of the Union. The Southern States with direct access to ports, for example, could afford to secede, in the hope that they would be able to continue unhindered to trade offshore. But slave States geographically closer to the Northern States or even reliant on Northern ports for foreign trade, and the Northern States on their borders could not as easily secede from the Union – the economic and social ties were strong.
Divisions within the Union were so strongly felt, and involved such fundamental social and economic issues that without concessions from either side the Civil War was indeed inevitable. In fact, the Compromise of 1850 had not resolved anything.
References
Calhoun, J.C. (1850) Speech delivered during the great debate over the Compromise of 1850 available online at http://avalon.law.yale.edu/20th_century/warpower.asp accessed September 6, 2011
General History of the United Sates Supreme Court and overview available online at http://www.supremecourt.gov/ accessed September 6, 2011
The Constitution of the United States of America: Overview available online at http://www.supremecourt.gov/ accessed September 6, 2011
Prescribed Reading available at:
https://online.apus.edu/educator/student/viewsite.cgi?td1766*4235448*mpos=4&spos=0&slt=GASSt1NQJPAbs*hist101i029sum11*0025*1
https://online.apus.edu/educator/student/viewsite.cgi?td1766*4235448*mpos=4&spos=0&slt=GASSt1NQJPAbs*hist101i029sum11*0025*2
https://online.apus.edu/educator/student/viewsite.cgi?td1766*4235448*mpos=4&spos=0&slt=GASSt1NQJPAbs*hist101i029sum11*0025*3
and accessed September 7, 2011 Read More
Share:
Tags
Cite this document
(“What issues were resolved by the Compromise of 1850 Who benefited more Research Paper”, n.d.)
Retrieved from https://studentshare.org/history/1579749-what-issues-were-resolved-by-the-compromise-of-1850-who-benefited-more-from-its-terms-the-north-or-the-south-why

(What Issues Were Resolved by the Compromise of 1850 Who Benefited More Research Paper)
https://studentshare.org/history/1579749-what-issues-were-resolved-by-the-compromise-of-1850-who-benefited-more-from-its-terms-the-north-or-the-south-why.

“What Issues Were Resolved by the Compromise of 1850 Who Benefited More Research Paper”, n.d. https://studentshare.org/history/1579749-what-issues-were-resolved-by-the-compromise-of-1850-who-benefited-more-from-its-terms-the-north-or-the-south-why.
Comments (0)
Click to create a comment or rate a document

CHECK THESE SAMPLES OF What issues were resolved by the Compromise of 1850 Who benefited more from its terms, the North or the South Why

...of the North and South, is still the issue of deep political argument and inconsistency between concerned groups, who take account of South and North Korea, United States, Russia, China and Japan (Cha, p. 102). A number of political analysts think that the procedure of ‘reunion’ has started already, even though on an extremely slow rate, by the existing procedure of understanding as well as financial collaboration between the North and South Korea. 1.1 Division of Korea The division of Korea into North and South Korea was the result of 1945 Allied triumph in second world...
12 Pages(3000 words)Research Paper

...different interpretations placed upon it, the Compromise of 1850, in part, would seek to address the issue of slavery. As for its definition, "The Compromise of 1850 was a series of five bills that were intended to stave off sectional strife. Its goal was to deal with the spread of slavery to territories in order to keep northern and southern interests in balance," (Kelly, p.1). For the young nation, the hope would be to equalize the relations between both the northern region, as well as the south and enable both sides to come to the same respective unity. The discussion over slavery,...
2 Pages(500 words)Essay

...Emotional perception of the characters from "North and South" by Elizabeth Gaskell Nowadays, the 19th century novels are being re-considered and re-evaluated from contemporary reader's position, which allows avoiding prejudiced attitude towards characters and even achieve a sort of emotional discourse between the reader and the protagonist. Furthermore, modern values allow the reader understand characters more profoundly, so that he/she even begins to live their lives and imagine him/herself in the setting the characters are prone to. "Gaskell's fourth novel, North and South,was also a social consciousness work, although less alarming than the first two....
6 Pages(1500 words)Book Report/Review

... 26 July 2007 Comparison Essay When I lived in Korea about three years ago, communism was familiar not only to me but also to peers whom I grew up with. My country is divided into two parts, North Korea and South Korea. During early 1950's, North Korea joined China and Russia to become a communist country while South Korea separated from America to be a democratic country. Even though I live in South Korea, I still become curious on what's going on between the two countries. Both of them can be traced from the same origin and speaks the same language, yet it is irrefutable that their people's lines of thought are different. Communism is a political movement that believes in an economic system in which the state controls the means... Muji...
4 Pages(1000 words)Essay

The Debate on the Compromise of 1850

..., as the central issue. But beyond the simple notion of slavery, both men agreed that the tensions were being promoted by abolitionists geared toward arousing anti-slavery feelings in the south. Webster was politically bound to show some public support for the Whig slave owners that he was courting for national support, while Calhoun needed anti-abolitionist support at home. Though the main issue of the Compromise of 1850 was the problem of the Texas territory and it's claim on New Mexico, neither man chose to highlight it in their speech. Another critical issue, the Fugitive Slave Act, was detailed by Webster but Calhoun...
3 Pages(750 words)Essay

The Compromise of 1850: the South and the North

Let us find you another Research Paper on topic What issues were resolved by the Compromise of 1850 Who benefited more from its terms, the North or the South Why for FREE!