Comments (0)
Add to wishlistDelete from wishlist
Cite this document
Summary
In principle, the statements made become the framework of the respective sides. The statements of the lawyers from each side though are not to be considered as…
Download full paperFile format: .doc, available for editing
HIDE THIS PAPERGRAB THE BEST PAPER97.7% of users find it useful 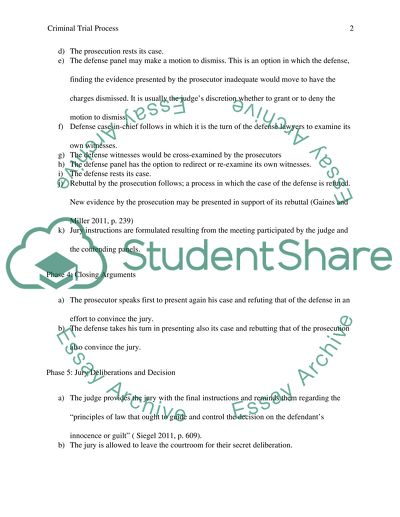 The Criminal Trial Process A criminal trial process can be divided into five major phases. The details and options in each phase are as follows: Phase 1: Choice between Judge or Jury Trial and Jury Selection
a) A choice is to be made whether to have a judge or jury trial. Provided with the right to do so, the defense would often choose a jury trial.
b) The jury would consist of 12 members if the criminal case is serious and as less as six if it is not.
c) The jury selection process is conducted with the participation of the defense and prosecution panels. Voir dire, the question and answer process used for the selection takes effect.
d) Motions in limine are forwarded to the court. These are requests from the opposing panels to include or exclude evidences.
Phase 2: Opening Statements
a) It is in this stage that the prosecution and defense present their cases in front of the judge and the jury. In principle, the statements made become the framework of the respective sides. The statements of the lawyers from each side though are not to be considered as evidences
Phase 3: Presentation of Evidence and Trial Proper
a) The prosecution case-in-chief is the where the prosecution panel expresses its principal case. It is here that the prosecution witnesses are directly examined by the prosecutors.
b) Cross-examination by the defense on the prosecution witness is carried out.
c) The option to redirect follows, in which the prosecutors may examine again its witnesses.
d) The prosecution rests its case.
e) The defense panel may make a motion to dismiss. This is an option in which the defense, finding the evidence presented by the prosecutor inadequate would move to have the charges dismissed. It is usually the judge’s discretion whether to grant or to deny the motion to dismiss.
f) Defense case-in-chief follows in which it is the turn of the defense lawyers to examine its own witnesses.
g) The defense witnesses would be cross-examined by the prosecutors
h) The defense panel has the option to redirect or re-examine its own witnesses.
i) The defense rests its case.
j) Rebuttal by the prosecution follows; a process in which the case of the defense is refuted. New evidence by the prosecution may be presented in support of its rebuttal (Gaines and Miller 2011, p. 239)
k) Jury instructions are formulated resulting from the meeting participated by the judge and the contending panels.
Phase 4: Closing Arguments
a) The prosecutor speaks first to present again his case and refuting that of the defense in an effort to convince the jury.
b) The defense takes his turn in presenting also its case and rebutting that of the prosecution also convince the jury.
Phase 5: Jury Deliberations and Decision
a) The judge provides the jury with the final instructions and reminds them regarding the “principles of law that ought to guide and control the decision on the defendant’s innocence or guilt” ( Siegel 2011, p. 609).
b) The jury is allowed to leave the courtroom for their secret deliberation.
c) Once a verdict is reached, the jury foreman tells the deputy sheriff that they already have one.
d) With the jury back in the courtroom, the decision is then read to the parties involved and everyone present.
List of References
Gaines, L., and Miller, R. (2011). Criminal Justice in Action: The Core. Belmont, CA: Wadsworth Publishing.
Siegel, L. (2011). Criminology 11th Edition. Florence, KY: Wadsworth Publishing. Read More
Share:
Tags
Cite this document
(“Criminal trial process Essay Example | Topics and Well Written Essays - 500 words”, n.d.)
Retrieved from https://studentshare.org/history/1578704-criminal-trial-process

...? Sentencing Stage in Criminal Trial Once discovery has been done where the prosecuting and defense attorneys have gone over documents, they come back to the court room where the judge ask if they have any extra information they want to bring to light. If not the judge sends the jury to mitigate a guilty or non guilty verdict. A case was chosen from Los Angeles of a drunken driver. According to Fisher (2011), the driver had killed an elderly man. In the case chosen, he had no jury as he pleaded "no contest to one count of vehicular manslaughter", which means he admitted that he killed the man without the intention of doing so. The choice of this paper is in the case of a admitting a guilty verdict and the...
1 Pages(250 words)Essay

How to Speed Criminal Trial

...in the country’s criminal law, as is the establishment of the Saudi Commission for Investigation and Prosecution. These developments, which took place in a short period of time, are a welcome change but pose new problems as well. My research would concentrate on delays in criminal trials and seek new ways to manage this problem in the Saudi legal system by incorporating and adapting methods from other jurisdictions. Some other jurisdictions may also have problems with delays, but it is more evident in Saudi Arabia. This issue not only goes against the public interest and the interest of the accused, it also violates human rights conventions. Thus, this research will concentrate on a...
11 Pages(2750 words)Dissertation

...The trial process The legal trial process involves various components, set as a procedure that is systematically followed from the time the trial starts up to when a verdict on such a case is given. The actual procedure starts when an individual is arrested, or when charges are filled for a warrant (Zuckerman, 2012). The initial procedure of the trial is the offer of opening statement, where the jury and the attorney are afforded an opportunity to engage. The necessity for making an opening statement is for the juries to be speedily briefed about the case. During the opening statement, all the evidence and the argument that the two sides...
3 Pages(750 words)Essay

...The Criminal Trial November 22, The Criminal Trial The process of a criminal trial begins with the selection of a jury. The jury is selected by the defense and prosecution by the means of a question and answer procedure known as “voir dire.” In federal courts and most state courts, the judge is the one that does the question and answer procedure, though the attorneys help to suggest the questions to be asked. Before the trial commences, the defense and prosecution are able to request that the court admit or omit certain pieces of evidence, especially those that have been proven to be irrelevant to the...
2 Pages(500 words)Essay

Stages of a Criminal Trial

...Stages of a Criminal Trial The American legal system has a number of interlocking stages that form a comprehensive judicial process. This essay examines each of these stages and considers any potential challenges. These stages are also considered in terms of how they were reflected in the seminal O.J. Simpson murder trial. The first stage of the criminal trial is the arrest. The arrest occurs as the state believes it has significant evidence indicating that the defendant committed a crime. An arrest warrant is issued, the accused is read their rights, and they are then taken into custody ("Criminal law stages," 2011)....
2 Pages(500 words)Essay

Stages of a criminal trial

...Running head: STAGES OF A CRIMINAL TRIAL Stages of a Criminal Trial College: Stages of a Criminal Trial One of the most vital aspects fora criminal case is the trial. A trial is defined to as the process in which two or more parties in a dispute, settle their matters in court before a judge or a jury (Felman, 2002). It is important to realize that most criminal cases never get to the trial stage because of things such as plea to dismiss the cases and motions of bargains. The state, in a criminal case brings the suit...
1 Pages(250 words)Essay

...was charged with murder, but pleaded not guilty. However, Caylee’s skeletons were found on a wooden area next to their home on December 11. At the time her body was found, there was also a tape found next to the skull just next to the mouth. A medical report indicated that Caylee might have been killed using the tape. The trial continued for six from May to July 5, 2011 when the jury acquitted her of murder charges, but convicted of a misdemeanor for lying to the police officers during investigations (Shahani, 2011). Analysis of the case Burden of proof One of the issues that played out in Casey’s trial was the burden of proof, which refers to the duty placed upon a party to a dispute in a civil or...
6 Pages(1500 words)Essay

...for public defenders appointment (Griffiths & Pritchard, 2010, p. 224). This has the implication that, each individual person arrested for a crime, in spite of his or her status, is legally unrestricted to have an independent and a free legal representative present, prior to the commencement of police interviews. The Crown Prosecution Service will focus on criticism while at the same time identifying and evaluating CPS’s functions, as well as, its applicability in defence during criminal trials. In addition, the paper will also focus on identifying and discussing sentencing powers as well as limitations that are accessible by a Judge during a particular criminal case. Prior to...
7 Pages(1750 words)Essay

...The paper critcally evaluates the Crown Prosecution Service (CPS) and the role that CPS plays. Also, reforms and recommendations are offeredregarding the role of CPS. Introduction The time is changed for the English criminal trials. The methods of criminal trials have changed today compared to what it was during the time frame of late 17th to early 20th century. The trials were quick; lawyers were rarely present and even the judges, jurors and prosecutors used to exercise considerable discretion on their interpretation about the law. The changes in the criminal justice systems and procedures started during the 18th century and the most...
7 Pages(1750 words)Essay

...is normally represented in the court all through the process from the first court hearing all the way to actual the sentencing, and in some situations to the appeal of unsatisfactory cases. All the prosecutions have to be reviewed and halted if the evidence and the public interest tests are no longer satisfied or were never satisfied in the beginning of the prosecution process (Samuels, A. 2001). Mishandling of a case, for example, failure to disclose material evidence may lead to the court acquitting a defendant or dismissing the appeal of the conviction. Mishandling therefore results to denial of justice to the defendants or the criminal upon conviction as he may be denied an appeal....
8 Pages(2000 words)Admission/Application Essay
sponsored ads
Save Your Time for More Important Things
Let us write or edit the essay on your topic "Criminal trial process" with a personal 20% discount.
GRAB THE BEST PAPER

Let us find you another Essay on topic Criminal trial process for FREE!