Comments (1)
Add to wishlistDelete from wishlist
Cite this document
Summary
This essay focused on the aspects of World War 1 focusing on two different centers- The Soldiers and The Civilians. It is natural to wars that the entire society suffers from mental trauma of losing the loved ones, the economy suffers a downturn and the social order is uprooted. …
Download full paperFile format: .doc, available for editing
HIDE THIS PAPERGRAB THE BEST PAPER97.2% of users find it useful 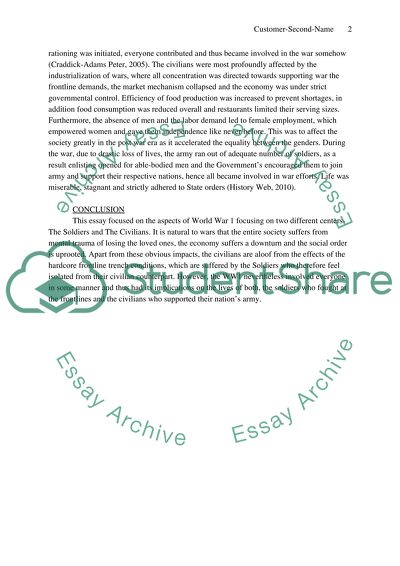 and Section # of First World War INTRODUCTION The World War of 1914 is the cause of major changes throughout the world, and is often referred to as the First Total War due its nature of involving almost all the nations around the globe in an orgy of hatred, bloodshed and a battle for survival. It did not only impact the soldiers at the battle front, but also had profound effects on the citizens at home, and hence it managed to involve the entire society into the devastating warfare or other related activities (Mayson, 2009). The WW1 had drastic implications on the psychological condition of the soldiers and the citizens alike, where everyone was struck by loss of life of family, friends and relatives, leaving the mind in a state of mental trauma, which made readjustment into the post-war society extremely difficult for all, making their lives unstable, socially, physically and mentally (Mayson, 2009).
LIFE OF SOLDIERS
The soldiers in the WW1 were ensnared in an environment entirely cut off from their daily lives, an alien atmosphere which was a self contained nightmare for all, obliged to adhere to duties, and following of orders that certainly led to death, but yet the traditional notions of patriotism, duty, honor and submission to authority instigated them to proceed with due endurance. In the trenches where death was illogical and uninvited, the soldiers were aloof from the real world and clutched in the dull insanity where everything was lost in the sheer vagueness of life, and some sunk deep into depression due to the prevailing conditions- inhumane, unhygienic and hopeless. Soldiers felt isolated and believed that those who were not at warfront do not understand its implications on the human mind, and at times believe that the civilians do not care and hence the soldiers became bitter (Ellis, 1989, 192 – 193). The trenches were full of smell, of rotten bodies and men who haven’t washed for a long time, there were no facilities, just the odor of poison gas, rotting sandbags, stale mud and meat, cigarettes and food, in addition the rats devoured on the grotesquely disfigured bodies of dead soldiers. Diseases spread, such as Trench fever, caused by lice which were a constant problem in the trenches. Furthermore, the men suffered from shell shock, simply known as mental breakdowns due to constant bombardment (HubPages, 2010).
LIFE OF CIVILIANS
The First Great War is usually regarded as a war between the soldiers at the warfront, but since it harnessed the resources of every nation, regardless of their ownership, it was vastly considered as a war that affected all. Civilians contributed by working in factories which produced ammunition, uniforms, guns, tanks and other war related substances. Almost all families had members fighting at war fronts, thus leading to mental involvement and fear of losing the member. The journalists and clergymen had the role of opinion formers hence they were affected by the stories of the aggrieved. Furthermore, when raids occurred and food rationing was initiated, everyone contributed and thus became involved in the war somehow (Craddick-Adams Peter, 2005). The civilians were most profoundly affected by the industrialization of wars, where all concentration was directed towards supporting war the frontline demands, the market mechanism collapsed and the economy was under strict governmental control. Efficiency of food production was increased to prevent shortages, in addition food consumption was reduced overall and restaurants limited their serving sizes. Furthermore, the absence of men and the labor demand led to female employment, which empowered women and gave them independence like never before. This was to affect the society greatly in the post war era as it accelerated the equality between the genders. During the war, due to drastic loss of lives, the army ran out of adequate number of soldiers, as a result enlisting opened for able-bodied men and the Government’s encouraged them to join army and support their respective nations, hence all became involved in war efforts. Life was miserable, stagnant and strictly adhered to State orders (History Web, 2010).
CONCLUSION
This essay focused on the aspects of World War 1 focusing on two different centers- The Soldiers and The Civilians. It is natural to wars that the entire society suffers from mental trauma of losing the loved ones, the economy suffers a downturn and the social order is uprooted. Apart from these obvious impacts, the civilians are aloof from the effects of the hardcore frontline trench conditions, which are suffered by the Soldiers who therefore feel isolated from their civilian counterpart. However, the WW1 nevertheless involved everyone in some manner and thus had its implications on the lives of both, the soldiers who fought at the frontlines and the civilians who supported their nation’s army.

cz
czboncak added comment 9 months ago
Student rated this paper as
The topic of "First World War" was hard to find. I spent ages to find it. Here at StudentShare, I got the most decent sample. Many thanks!

US and the first World War

...US and the First World War Isolationism is a policy doctrine employable by any country that needs to restrain from interfering with the affairs of other countries, or engaging in alliances that force them to take sides in case of a conflict. Isolationist state cites the need to focus on its internal development and structuring of the local production forces towards advancement of its economy. This policy became clearer during the World War I when America sought to isolate itself from participating in war or appearing to support any side of the conflicting parties in Europe (Morreta and Kearney 133). The reason why America had to employ...
5 Pages(1250 words)Essay

...The First World War History is replete with many battles and wars. But the First World War was the kind of war which sharply polarized the world community. It was the first big war which saw the use of modern day warfare technology and strategies in a big way. Large scale use of machine guns, battle tanks, air force power, Gaseous material etc. resulted in millions of casualties in the war. Events prior to World War-I, appear quite intriguing to historians with Sir Winston Churchill, recalling in 1920s,...
10 Pages(2500 words)Essay

...World War One 2007 World War One The First World War was one of the most important turning points in the history of modern civilisation.The enormous military conflict dramatically changed the face of Europe producing seven new states (Czechoslovakia, Finland, Lithuania, Estonia, Latvia, Poland and Yugoslavia), ended the epoch of huge empires such as Austro-Hungary and Ottoman Empire and brought serious changes to the colonial territories in Africa and Asia. The war also provided a brilliant example of the danger involved in the uncontrolled use of modern devastating weapons for resolving contradictions...
10 Pages(2500 words)Essay

...Assess the Extent of Popular Enthusiasm for the War in the Summer and Early Autumn of 1914 The First World War, commonly called the Great War, was the first war which involved large portions of the population, and while there was a lesser death toll than the terrible Influenza which followed in its wake, the loss of life made it shocking to all those who participated in it. The War memorials which now decorate most British towns are a lasting testament to the disaster which overtook many of those who signed up at the beginning of the war. By 1919, the numbers of widows below 45 was more...
10 Pages(2500 words)Essay

...Pre First World War: 1914 Until 1914, a woman’s hair was her crowning glory. In the early 1900s, pads and frames of false hair were common with womenwho wanted their hair to appear full and soft. This pompadour style was achieved by supports and back combing. Back combing involved pulling all the back hair into a plait or flat coil and drawing the hair into the crown of the head. In 1902, a pompadour style called the transformation was widely used (Conway 2004). The transformation product was made of natural hair that could be waved and it transformed any hair style into one with an abundant amount of waves. This transformation product was supported by a pompadour frame that was easily...
4 Pages(1000 words)Essay

...The First World War The First World War was allegedly caused by the assassination of the Austrian Archduke Franz Ferdinand and his wife by a Serbiannationalist radical by the name of Gavrilo Princip. This gave the Austro-Hungarian the pre-text to go to war with Serbia. In response, the Russian Empire went to the aid of Serbia since Russia looks to it as a fellow Slavic neighbor. This led the German Empire to take the side of its Austro-Hungarian neighbor. The British would also go to war in case Germany joined the Austro-Hungarian Empire, while the French would go to war with Germany in...
1 Pages(250 words)Essay

...The First World War Introduction There is no doubt that the First World War was one of the greatestevents of the twentieth century. The war led to the death of over 9 million people, most of whom were the combatants. Historians argue that such large number of casualties could be attributed to rapid technological advancements that were taking place at the time (Robbins 2002). The technological advancements enhanced the lethality of the weapons and thereby the death of many people and destruction of property. The war began in 1914 and ended in 1918 and was mainly centered in Europe. While various...
6 Pages(1500 words)Research Paper
sponsored ads
Save Your Time for More Important Things
Let us write or edit the essay on your topic "First World War" with a personal 20% discount.
GRAB THE BEST PAPER

Let us find you another Essay on topic First World War for FREE!