The balance between freedom and truth- a dialogue - Essay Example

Comments (0)
Add to wishlistDelete from wishlist
Cite this document
Summary
On November 06, 2009, God arranged for a discussion or dialogue among five randomly chosen individuals (long dead) to be telecast live by practically every TV network in the United States and the rest of the world. …
Download full paperFile format: .doc, available for editing
HIDE THIS PAPERGRAB THE BEST PAPER98.4% of users find it useful 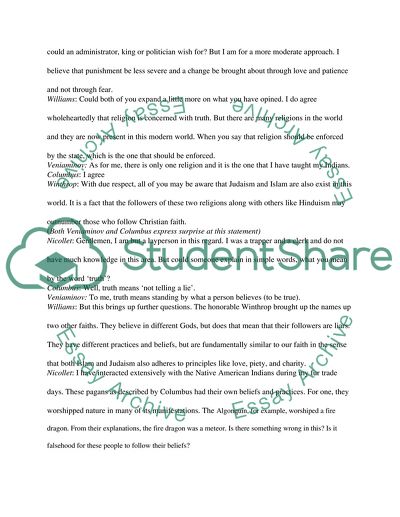 Extract of sample "The balance between freedom and truth- a dialogue"

“The Balance Between Freedom and Truth- a Dialogue Essay”, n.d. https://studentshare.org/history/1559344-the-balance-between-freedom-and-truth-a-dialogue.
Comments (0)
Click to create a comment or rate a document

Political Dialogue between Hitler and Stalin

...? Political Dialogue between Hitler and Stalin Adolf Hitler, the notorious dictator of Germany, represents the darker side of Nazism which dragged the whole world towards the World War II. On the other side, Joseph Stalin represents the dark side of Communist ideology, which dragged the whole world towards the Cold War and it’s far reaching consequences. In Germany, the Nazi Party was under the authority of Adolf Hitler represented Nazism. On the other side, in 1922, The Communist Party of the Soviet Union became totally under the control of Joseph Stalin. The theoretical parts of both these political ideologies were similar but the practical side led the whole world to calamity and bloodshed. Thesis...
8 Pages(2000 words)Essay

..., and Griffiths, 2006: 143). Sometimes a show of unity, friendship and teamwork does not in reality, symbolize that the involved are actually friend. This paper will represent a dialogue in the form of a script, between two theorists, Michael Foucault, and Anthony Giddens. The dialogue will actually, be based on the theorists’ theoretical views on friendship. Anthony Giddens: In fact, friendship between people rewards many individuals, but to others, who lose it take it as punishment. It is a fact that, many people repeatedly find agreement with views of their own to be really rewarding. Michael Foucault: Yeah…! Anthony Giddens: This reward indeed, favors sentiments...
11 Pages(2750 words)Essay

Balance Between Good for Society vs. Individual Freedom

...﻿Balance Between good for society vs. individual freedom Safety is one of the main problems and concerns investigated and controlled by the society and the government. The main health-care problems that the government is obliged to tackle is proliferation of diseases (namely pandemics and viruses). In contrast with traditional viruses such as smallpox and poliomyelitis, new viruses of fearful scope have now appeared. HIV/AIDS and avian influenza are the main threats to safety and existence of mankind. The threat can be explained by the fact that the alterations of mutation, reassortment, and recombination, viruses could have evolved their own genetic structure. According to statistical...
2 Pages(500 words)Essay

Freedom and the Art of Balance

...Ethics. In this Aristotle pointed out the virtue ethics which demarcated the proper functioning of every article of thing. He said that what is fact is truth for e.g. an eye is only a good eye as long as it can see as the proper function of eye is sight. Also, he identified the best activity of the soul as eudaimonia (a sense of happiness that suffuses the good life) and in order to attain the good life one must live a balanced life and avoid anything in excess. This excess could hold different meaning for different people and also for different situations and exists as a golden mean between the two vices- one is an excess while other is a deficiency (Nichomachean Ethics). This is...
2 Pages(500 words)Essay

Balance Between Work and Family

...Sociology Essay Order Number: 125192 Many Australian s have undergone significant changes, work and family, in particular, have been forced to alter dramatically to cope with the demands of modernity. The aim of this essay is twofold; how are the roles of men and women adapting to changes in work and family life in Australia? And are we moving towards more gender equality in the balance between work and family, or something else? The major changes examined here are attitudes to work and family, the creation of new occupational categories and how this facilitated greater female participation in the workforce. Increased female participation and how this has changed the very nature of the family. Labor...
6 Pages(1500 words)Essay

... exists. Rather it is replaced by an acquaintance, colleague or a person one does not know. Along with this change, there is another change that relates to the replacement of certain emotions. Excuse me from elaborating, but I believe that in today’s world, honor takes the place of loyalty; loyalty is only seconded by personal affection. Furthermore, sincerity takes the place of authenticity, which refers to the notion that the other person be open and a well-wisher. Therefore a friend may not be expected to deliver the truth at all times. Conversely, a friend is someone who safeguards the emotional prosperity of the other person. In the olden times, people used to define a good and sincere friend as someone who is willing to help... the...
10 Pages(2500 words)Essay

...Dialogue between Walter Benjamin and Myself Me: The concept of Aura is among the most famous theoretical by WalterBenjamin. However, first describe who is Walter Benjamin is? Benjamin: Walter Bendix Schonflies Benjamin is a German-Jewish essayist, literary critic, translator, broadcaster, and social critic. I am famous for combining Romanticism, Jewish mysticism, and historical materialism to make the influential contributions to Western Marxism and aesthetic theory. Within the communication realms, Benjamin is known for the ‘aura’ concept (Benjamin 19). Me: That is a very amazing description. So what is the ‘aura’ concept? Benjamin: In recent times, the concept of aura has had many definitions...
2 Pages(500 words)Assignment

Imaginary dialogue between Parmenides and Heraclitus

...is fundamentally changing. The universe is the same now as it always has been and as how it always will be. Heraclitus: That is absurd how is it possible for the universe to be the same now as it was a hundred years ago, clearly things have changed? Parmenides: No that is only an illusion. Time is also an illusion. I promise you Heraclitus, the universe does not change. Heraclitus: But what about my memory? I have no recollection of the future, thus it has not occurred. The difference between the present and the future then demonstrates that the universe is changing. Parmenides: I recognize that you make a strong argument Heraclitus. I agree with you that humans have no understanding of the future. However, this...
2 Pages(500 words)Essay

One major difference between the two centuries is the industrial revolution that changed the whole social dynamics of the world. Flora: But it has changed. Nowadays seeking a profession for a woman is not taboo. But most of the professions that women get areas housemaids or if they are good at reading and writing, they can be teachers or they can become novelists like me. Jane: Well, that sounds nice, even though your century seems more open, but still women are not equal to men in social dynamics. I don’t know about the specific roles in your society but here in the eighteenth century, we women, usually after the age of 23, wait for their prince charming to knock at their doorstep. We have to show shyness and have to act de...
3 Pages(750 words)Essay

...Dialogue It is often that some people do not possess the ability to converse topics that are important to them without getting into a dispute. This can get even worse when people are holding onto their personal interests. It’s often that positional versus interest-based communications will result into a conflict due to such individual stands. Personal stand is where one party holds on a particular opinion of an issue often conflicting with a common underlying interest whereas interest-based communications’ focus is on utilizing the common interests with an aim of benefitting the resolution process (Furlong, 2005,). Dialogue is a way of conversation in which conflicting parties relate and converse in search of for an understanding... . In this...
2 Pages(500 words)Essay
sponsored ads
Save Your Time for More Important Things
Let us write or edit the essay on your topic "The balance between freedom and truth- a dialogue" with a personal 20% discount.
GRAB THE BEST PAPER

Let us find you another Essay on topic The balance between freedom and truth- a dialogue for FREE!