Comments (0)
Add to wishlistDelete from wishlist
Cite this document
Summary
Before the mid-fifteenth century, the North American continent was home only to native Americans or Indians as the Europeans came to call them. From 1450 to 1750, European explorers and later European settlers who came to America transformed the lands and used the natural wealth of the country. …
Download full paperFile format: .doc, available for editing
HIDE THIS PAPERGRAB THE BEST PAPER95.3% of users find it useful 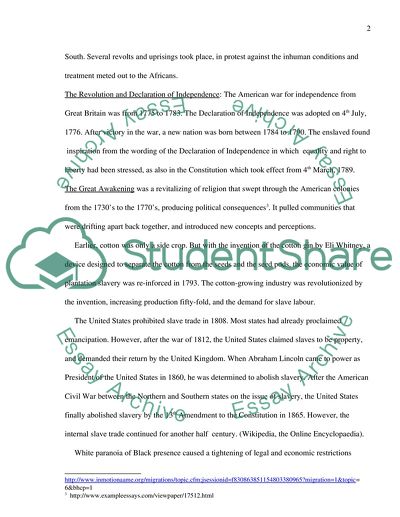 SLAVERY 1790 – 1820’s American View of Slavery from 1790 to 1820’s. Introduction: Before the mid-fifteenth century, the North American continent was home only to
native Americans or Indians as the Europeans came to call them. From 1450 to 1750, European
explorers and later European settlers who came to America transformed the lands and used the
natural wealth of the country. They also travelled to Africa where they began a trans-Atlantic
slave trade, that would bring millions of Africans to the Americas as well. This slave trade was
to lead to a new social and economic system, where the colour of one’s skin would determine
whether one would lead a life of enslavement or freedom1.

Slave Trade: The Europeans justified the slave trade by proclaiming that they were providing
an opportunity for Africans to become Christians. By the 17th century the removal of slaves from
Africa became a holy cause that had the full support of the Christian church.(Walvin 1983).
Also, race and racism provided the excuse slave owners needed to allow themselves to own
slaves without feeling guilty. “Slavery was not a side show in American history”, says Dr. James
Horton of George Washington University; “It was the main event”.
In his book American Slavery – American Freedom, Edmund S. Morgan makes a searching
study of the tragic contradiction which was at the core of America, as seen in Virginia. It was the
first state to start the freedom struggle through the Revolution and was also the largest slave
holder in the country. The labor of enslaved Africans proved crucial in the development of South
Carolina, Georgia, and Maryland, and contributed indirectly through commerce to the fortunes of
New York, Massachussetts, and Pennsylvania. The Africans were made to work on fields to
grow rice, cotton, indigo, sugarcane, tobacco, etc.They also worked in the commercial economy
and as domestic servants2. Slavery took deepest root in Louisiana and other territories in the
South. Several revolts and uprisings took place, in protest against the inhuman conditions and
treatment meted out to the Africans.
The Revolution and Declaration of Independence: The American war for independence from
Great Britain was from 1775 to 1783. The Declaration of Independence was adopted on 4th July,
1776. After victory in the war, a new nation was born between 1784 to 1790. The enslaved found
inspiration from the wording of the Declaration of Independence in which equality and right to
liberty had been stressed, as also in the Constitution which took effect from 4th March, 1789.
The Great Awakening was a revitalizing of religion that swept through the American colonies
from the 1730’s to the 1770’s, producing political consequences3. It pulled communities that
were drifting apart back together, and introduced new concepts and perceptions.
Earlier, cotton was only a side crop. But with the invention of the cotton gin by Eli Whitney, a
device designed to separate the cotton from the seeds and the seed pods, the economic value of
plantation slavery was re-inforced in 1793. The cotton-growing industry was revolutionized by
the invention, increasing production fifty-fold, and the demand for slave labour.
The United States prohibited slave trade in 1808. Most states had already proclaimed
emancipation. However, after the war of 1812, the United States claimed slaves to be property,
and demanded their return by the United Kingdom. When Abraham Lincoln came to power as
President of the United States in 1860, he was determined to abolish slavery. After the American
Civil War between the Northern and Southern states on the issue of slavery, the United States
finally abolished slavery by the 13th Amendment to the Constitution in 1865. However, the
internal slave trade continued for another half century. (Wikipedia, the Online Encyclopaedia).
White paranoia of Black presence caused a tightening of legal and economic restrictions
against blacks, from 1815 onwards. The Africans had to face a lot of discrimination4.
Conclusion: In the period between 1790 to 1820’s , we see that slavery is revived and continued
although abolition of human bondage as a concept takes root, both politically and from religious enlightenment. The nation is transformed by the economic advantage of slavery.
REFERENCES
Morgan, Edmund S. 1995. American Slavery – American Freedom. W.W. Norton & Co.
http://www.wwnorton.com/catalog/spring95/031288.htm
Walvin, James. March 1983. Slavery and the Slave Trade. Palgrave Macmillan
http://www.spartacus.schoolnet.co.uk/usaslavery.htm Read More
Share:
Tags
Cite this document
(“American View of Slavery from 1790 to 1820s Essay”, n.d.)
Retrieved from https://studentshare.org/history/1537401-american-view-of-slavery-from-1790-to-1820s

...Thomas Jefferson's View on Slavery Thomas Jefferson was the third American president. His term lasted from 1801 to 1809. Born in 1743, he grew up in Virginia at a period when slavery had existed for almost 75 years. Jefferson grew up in a plantation in Virginia with enslaved workers. As an adult, he owned slaves. Although he owned slaves, Jefferson opposed slavery. His views on slavery remain contradicted since at one point he considered blacks inferior to other races while at the same time calling for an end to slavery. Historians have always debated on the contradictions between his words and actions...
10 Pages(2500 words)Research Paper

Slavery in the American Colonies

...to the addition of several free states. An anti-slavery president was also appointed. The political issue that ultimately took the nation towards the war was nothing but slavery in the western territories acquired during the Mexican-American War. The same case was earlier considered in 1820, when slavery was permitted in the Southern border of Missouri. Rep. David Wilmot tried to prevent slavery as he brought the Wilmot Proviso in Congress. After long debate it got defeated. Attempts were made to solve the issue, but failed. The issue appeared again in 1854 with the Kansas-Nebraska Act. Kansas-Nebraska Act resulted in an arrival of pro-...
4 Pages(1000 words)Essay

...? BUILDING OF A NATION: 1790-1877 First September 30, After the Declaration of Independence (from English rule) in 1776, the United States grew in leaps and bounds from a culmination many crucial events, discoveries, and movements over the following century. The period from 1790 to 1877 saw great governmental, social, economic, and geographic changes – from changing political groups, to the abolition of slavery, to Reconstruction, to expansionism and the addition of 25 states. These formative years of America are crucial to understand if one is to truly grasp how this country came to be what it is today. Just 14 years after the founding of our nation in 1790, many changes...
3 Pages(750 words)Term Paper

...Slavery and American Revolution Introduction It is an undeniable fact that the non-European citizens of America encountered long periods of suffering under their perceived superior masters. The first frustration of non-Europeans started immediately after the arrival of Columbus at the Baham Islands occupied by Arawaks. Upon docking in the waters of Baham Islands, the Arawaks provided warm welcomes to the newly arrived visitors whom they accommodated and offered security. Zinn (1) reports that the Arawaks were harmless community who did not how to bear weapons against their transgressors. The Arawaks also provided food, gifts and water to Christopher Columbus and his crew upon arrival in the territories...
3 Pages(750 words)Essay

Slavery and the American Revolution

...? Slavery and the American Revolution First Slavery and the American Revolution Slaves, mainly fromthe African continent and some others from the Caribbean began to arrive in the United States from the early 1700s. In that year there were 25,000 slaves that arrived. The number of slaves that were brought to America continued to grow rapidly through the years such that they were well over 567,000 slaves owned by the Americans by 1775. By that time the numbers of slaves had grown to such a number that they outgrew the number of white convict labor, their only real competition in terms of being free labor that didn’t have to be paid for. There were however major regional variations in the numbers of slaves held in the United States... the...
6 Pages(1500 words)Research Paper

...Slavery As is indicated by the importance of foreign aid in the outcome of the Revolutionary War, the United States and those who helped bring it about were strongly dependent upon the products produced by slaves. “They desperately need the assistance of other countries, especially France, and their single most valuable product with which to purchase assistance was tobacco, produced mainly by slave labor.”1 This need and dependence seems to indicate that a large reason for slavery in the North American colonies was to produce tradable goods that would purchase the aid and support they required to make themselves free at the expense of someone else’s freedom. However, this also...
4 Pages(1000 words)Essay

...Describe the basic aspects of American slavery. Slavery in America was a major challenge or an issue of contention in the 19th century. It was controversial because many of the white people enslaved black people because they believed that black people were lesser. They convinced the black that working as a slave was one of the best they could achieve in life. This contributed to various problems handling the issue. The basics aspect of American slavery was that many Americans were incredibly divided about the idea of slavery. The North fought towards the abolition of slavery while the Southern economy...
2 Pages(500 words)Essay

...﻿Abraham Lincoln View of slavery Abraham Lincoln was Americas 16th president who ruled in 1869 before he being assassinated in the year 1865. He is well known through the legacy he left in the United States Lincoln was at the forefront of guiding the American Nation through the Civil War that claimed the lives of many. He also led America through the constitutional and political calamity. Abraham Lincoln ensured that the union was preserved and as a result, he participated in abolishing slavery in the United States. Besides, he also modernized the economy and strengthened the federal government. Abraham Lincoln leadership campaigned against the expansion of...
2 Pages(500 words)Essay
sponsored ads
Save Your Time for More Important Things
Let us write or edit the essay on your topic "American View of Slavery from 1790 to 1820s" with a personal 20% discount.
GRAB THE BEST PAPER

Let us find you another Essay on topic American View of Slavery from 1790 to 1820s for FREE!