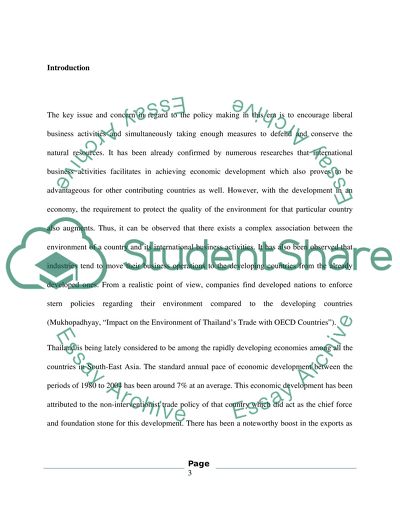 Download file to see previous pages However, with the development in an economy, the requirement to protect the quality of the environment for that particular country also augments. Thus, it can be observed that there exists a complex association between the environment of a country and its international business activities. It has also been observed that industries tend to move their business operations to the developing countries from the already developed ones. From a realistic point of view, companies find developed nations to enforce stern policies regarding their environment compared to the developing countries (Mukhopadhyay, “Impact on the Environment of Thailand’s Trade with OECD Countries”). Thailand is being lately considered to be among the rapidly developing economies among all the countries in South-East Asia. The standard annual pace of economic development between the periods of 1980 to 2004 has been around 7% at an average. This economic development has been attributed to the non-interventionist trade policy of that country which did act as the chief force and foundation stone for this development. There has been a noteworthy boost in the exports as well as in the imports of the country (Mukhopadhyay, “Impact on the Environment of Thailand’s Trade with OECD Countries”). Long-Established and Continuing Bilateral Relationships The issue of environmental pollution is becoming a vital concern and is developing to be a problem especially in the city areas of Thailand. The history of amicable relation and exchange of traditions between Japan and Thailand dates back to above 600 years. Therefore, it becomes apparent that there exists a strong relationship of trading activities between these two countries. The mutual association between them is getting stronger and closer over the years, especially in the economic front. This can be attributed to the flourishing business of Japan and its extended investments as well as the continuous shifting of technological skill and expertise into Thailand. Japan is also said to be the largest provider of Official Development Assistance (ODA) towards Thailand. In regard to direct foreign investment in Thailand, Japan continues remaining to be the biggest foreign contributor in that country. However, a dip in the quantity of invested capital was recorded owing to the Asian economic as well as currency crisis in the year 1997. This close association among the two countries has also triggered the increase in the amount of visitors from Japan to Thailand. The intention of travel has surpassed the commercial requirement and expanded into exploring places of interest in the country of Thailand. Due to this reason, quite a significant amount of Japanese residents can be found in the various parts of Thailand, majority of who are supposed to be the employees of Japanese organizations. All the above mentioned factors are escalating the population of that country as a result of which there has been a significant boost in the modes of transportation in that country. This augmentation in the transportation forms is triggering the ...Download file to see next pagesRead More
Share:
Tags
Cite this document
(“Environmental Issues (Environmental Protection, Specific Industries, Research Paper”, n.d.)
Environmental Issues (Environmental Protection, Specific Industries, Research Paper. Retrieved from https://studentshare.org/history/1436128-environmental-issues-environmental-protection
(Environmental Issues (Environmental Protection, Specific Industries, Research Paper)
Environmental Issues (Environmental Protection, Specific Industries, Research Paper. https://studentshare.org/history/1436128-environmental-issues-environmental-protection.
“Environmental Issues (Environmental Protection, Specific Industries, Research Paper”, n.d. https://studentshare.org/history/1436128-environmental-issues-environmental-protection.
Comments (0)
Click to create a comment or rate a document

In terms of the drawbacks, one of the main issues is the needed resources and expenses which continuously increase due to the i...
6 Pages(1500 words)Assignment
sponsored ads
Save Your Time for More Important Things
Let us write or edit the research paper on your topic "Environmental Issues (Environmental Protection, Specific Industries, etc.) of Southeast Asia" with a personal 20% discount.
GRAB THE BEST PAPER