Comments (0)
Add to wishlistDelete from wishlist
Cite this document
Summary
Cardiac health is one of the most urgent concerns in medicine. It has become such a concern that the United Nations (UN), through the World Health Organization (WHO) is now approaching the fifteenth year of its efforts to promote better cardiac health care and rehabilitation (1993)…
Download full paperFile format: .doc, available for editing
HIDE THIS PAPERGRAB THE BEST PAPER94.3% of users find it useful 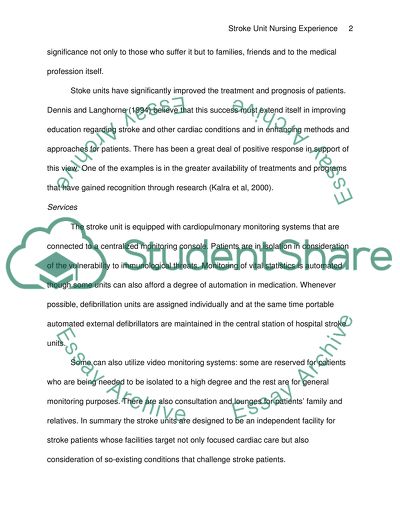 Download file to see previous pages According to Susan Mayor (2005), the success of cardiac care programs such as the establishment of stroke units have been very encouraging and. This, together with the rising demand of services is prompting the National Health Service (NHS) to study options for their deployment. Cathy Jackson (2005) however also points out that the process will be slow because of the financial and manpower costs of services. Thus, the focus of developing stroke units must not only be in developing the centers themselves but also in developing the skills of health care professional delivering care for patients.
Strokes or cerebrovascular accident are arterial and venous acute neurological conditions that results to the reduction of blood supply to the brain which then leads to a loss of neuronal function because of cerebral perfusion (Thomson et al, 1997). However, the reality of the condition does not give a hint to its true impact and significance not only to those who suffer it but to families, friends and to the medical profession itself.
Stoke units have significantly improved the treatment and prognosis of patients. Dennis and Langhorne (1994) believe that this success must extend itself in improving education regarding stroke and other cardiac conditions and in enhancing methods and approaches for patients. There has been a great deal of positive response in support of this view. One of the examples is in the greater availability of treatments and programs that have gained recognition through research (Kalra et al, 2000).
Services
The stroke unit is equipped with cardiopulmonary monitoring systems that are connected to a centralized monitoring console. Patients are in isolation in consideration of the vulnerability to immunological threats. Monitoring of vital statistics is automated though some units can also afford a degree of automation in medication. Whenever possible, defibrillation units are assigned individually and at the same time portable automated external defibrillators are maintained in the central station of hospital stroke units.
Some can also utilize video monitoring systems: some are reserved for patients who are being needed to be isolated to a high degree and the rest are for general monitoring purposes. There are also consultation and lounges for patients' family and relatives. In summary the stroke units are designed to be an independent facility for stroke patients whose facilities target not only focused cardiac care but also consideration of so-existing conditions that challenge stroke patients.
Admissions
The numbers of patients accommodated are only those that need the highest level of cardiac care. The main constraint is the number of patients the stroke unit can accommodate. Prioritizations of patients depend on the severity of the case. Whenever possible, patients who can be transferred out to less intensive care programs promptly to ensure that at least a unit of accommodation is available in case of a patient suddenly being admitted for an extreme condition.
Patient screening is also done to determine risk of exposure of the subject patient from and to other patients. Even if a patient has a stroke or a resultant condition that should afford him admittance to the stroke unit, if there is an indication of mental health problems or immunological considerations, admission to the stoke unit can be limited and channeled to other ...Download file to see next pagesRead More
Share:
Tags
Cite this document
(“Cardiac Care Assignment Example | Topics and Well Written Essays - 2000 words”, n.d.)
Cardiac Care Assignment Example | Topics and Well Written Essays - 2000 words. Retrieved from https://studentshare.org/health-sciences-medicine/1528350-cardiac-care

CHECK THESE SAMPLES OF Cardiac Care

This is also the position Stone (2007) takes in the quote under discussion.
Furthermore, Stone goes on to declare that Australia has been very slow to implement this practice as compared with other countries and government agencies. One of the primary reasons is that the public policy system in Australia is quite complex and the decision-makers have not come into agreement on where to place it in the policy matrix. This leaves Interprofessional Practice and Education in the dark (or the cold) as far as strategic planning for implementation as well as placing itself within the funding cycles of the government disbursements. (Stone, 2007)
Policies are created in order to put in place how politicians and government official...
6 Pages(1500 words)Assignment
sponsored ads
Save Your Time for More Important Things
Let us write or edit the assignment on your topic "Cardiac Care" with a personal 20% discount.
GRAB THE BEST PAPER

Let us find you another Assignment on topic Cardiac Care for FREE!