Comments (0)
Add to wishlist Delete from wishlist
Cite this document
Summary
The world is changing rapidly and with every new treatment found for a disease, another new disease sprouts to haunt people. The importance of epidemiology now is increasing by leaps and bounds in identifying a causal inference for these diseases.
Epidemiology is the study of factors affecting the health and illness of populations, and serves as the foundation and logic of interventions made in the interest of public health and preventive medicine…
Download full paper File format: .doc, available for editing
HIDE THIS PAPERGRAB THE BEST PAPER91.7% of users find it useful 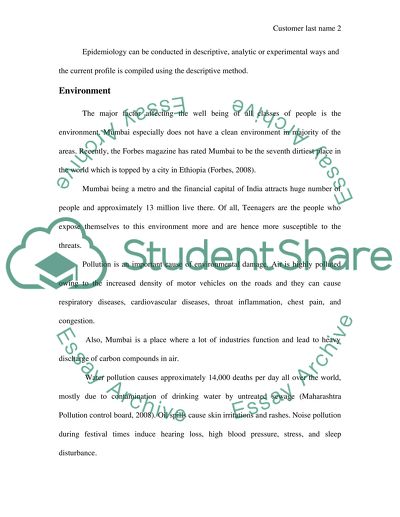 Download file to see previous pages While the general public can be categorized into different age groups, it is those who are in relatively very young and very old stages of life who are more vulnerable to attacks on health and well being. So, the analysis in this paper pertains to the former group (teenagers - aged between 13 and 19) and particularly on a city called Mumbai when I visited India.
Although teenagers all over the world get affected on health aspects, it is those in Mumbai who are more prone to such effects because of three main factors namely, environment, education and on how they spend their leisure time.
The major factor affecting the well being of all classes of people is the environment. Mumbai especially does not have a clean environment in majority of the areas. Recently, the Forbes magazine has rated Mumbai to be the seventh dirtiest place in the world which is topped by a city in Ethiopia (Forbes, 2008).
Mumbai being a metro and the financial capital of India attracts huge number of people and approximately 13 million live there. Of all, Teenagers are the people who expose themselves to this environment more and are hence more susceptible to the threats.
Pollution is an important cause of environmental damage. Air is highly polluted owing to the increased density of motor vehicles on the roads and they can cause respiratory diseases, cardiovascular diseases, throat inflammation, chest pain, and congestion.
Also, Mumbai is a place where a lot of industries function and lead to heavy discharge of carbon compounds in air.
Water pollution causes approximately 14,000 deaths per day all over the world, mostly due to contamination of drinking water by untreated sewage (Maharashtra Pollution control board, 2008). Oil spills cause skin irritations and rashes. Noise pollution during festival times induce hearing loss, high blood pressure, stress, and sleep disturbance.
In 2000 Mumbai moved to switch highly polluting vehicles to natural gas, and this likely contributed to a reduction in ambient particulate matter levels in the city (Mumbai Environmental Social Network, 2008). The movement of some industry outside of the city also presumably contributed as well.
Other factors, such as increased population, have tended to increase ambient particulate matter levels (Benmap, 2006). The net effect appears to be that ambient levels of particulate matter less than 10 microns in diameter (PM10) have held steady or in some cases declined over time(Study of Air Quality Trends, 2007).
"Cleanliness is next to Godliness" is a famous saying and such is its importance on health and well being. Mumbai's unclean environment derives from garbage dumping by houses and lack of moral responsibility from other commercial establishments.
A good number of Mumbai population live in slums and no proper maintenance are done in such places. Diseases like elephantiasis, leprosy, etc are frequently reported to affect people of all ages.
Waste management is an issue that needs to be ...Download file to see next pages Read More
Share:
Tags
Cite this document
(“Epidemiology project Essay Example | Topics and Well Written Essays - 3000 words”, n.d.)
Epidemiology project Essay Example | Topics and Well Written Essays - 3000 words. Retrieved from https://studentshare.org/health-sciences-medicine/1510338-epidemiology-project

CHECK THESE SAMPLES OF Epidemiology project

However, apart from the general comments of Durkheim regarding the potential causes of suicide, the researcher proceeds to an extensive analysis of suicide as a sociocultural phenomenon. In this context, according to Durkheim, the main types of suicide are the following four (as they are presented in Figure 1 below): a) Anomic suicide, b) Fatalistic suicide, c) Altruistic suicide and d) Egoistic suicide. The above 4 types of suicide refer to different social conditions. More specifically, the Anomic suicide is linked with ‘the moral dimension anomie which occurs when there is an imbalance of means and needs, a de-regulation in peoples’ lives, a loss of moral certainty, a loss of control or a loss of group support&rsquo...
6 Pages (1500 words) Assignment

A collage is something that speaks of one particular situation or theme and yet it is composed of many parts.  Thus, an artist doesn’t only take one good shot of a particular scene but of many several scenes because he still has to put it together to make a new harmonious picture. The title of my collage is Desolation; which means something that is unhappy, ugly or deserted. So to start my college I went to different places to take the perfect pictures. I went to Alba, to a power plant, to Sitra, and to many other places. I had fun traveling but it could also be tiring at times. The excitement is always there, however, it could also be frustrating as I always had to explain why I am taking pictures. People tend to becom...
12 Pages (3000 words) Assignment

Only four known strains of avian influenza viruses have been found to affect humans among them H5N1, H7N3, H7N7, and H9N2. Among the four, H5N1 is the most highly pathogenic. It is the greatest source of alarm due to two primary reasons. The first reason...
7 Pages (1750 words) Report

On the other hand, the subjects in cohort studies are selected on the basis of whether they have a certain risk factor/exposure or not and are then followed over time to observe for the development of the outcome/disease (Mann, 2003). Cohort studies can either be prospective or retrospective and can be used to calculate the incidence of a disease and the relative risk of developing a disease.
As compared to observational studies, such as case-control and cohort studies, in interventional studies such as a randomised control trial, the investigator assigns the exposure. In other words, the investigators introduce an intervention and the study objective is to determine the effect of that intervention on the study population. Such...
7 Pages (1750 words) Assignment
sponsored ads
Save Your Time for More Important Things
Let us write or edit the essay on your topic "Epidemiology project" with a personal 20% discount.
GRAB THE BEST PAPER

Let us find you another Essay on topic Epidemiology project for FREE!