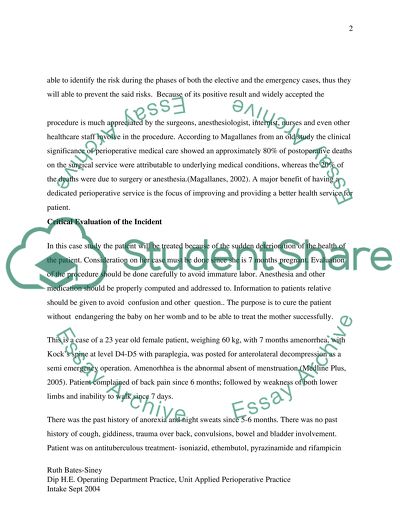 Download file to see previous pages This includes the study of applied perioperative care in abdominal aortic aneurysm (AAA) in patient with coronary heart disease. It will prove the success of perioperative care in both the non-scheduled and elective surgery. It will describe the interaction of the patient with the perioperative staff and nurses through out the procedure.
A Perioperative medicine addresses the medical care of the surgical patient and focuses on the patient's status before, during and after the actual surgical procedure. Perioperative medicince is not a sub specialty of medicine but rather a body of medical knowledge that enables physicians to manage medical illness during the perioperative period, assesses operative risk, and respond to complications. (Magallanes, 2002). Perioperative surgery is classified according to the severity of the situations or case; the elective and the emergency surgery. In the elective surgery a patient were prepared for the procedure and is scheduled and is given a certain time of waiting not unless the case becomes severe. The emergency surgery is the one that needs to be done right away. It maybe an accident or a result of trauma. The injury maybe life threatening and therefore procedure will be done within 1-2 hours from admission. In this case it is important that the perioperative team will coordinate to each other in order to deliver safe patient care during the potentially traumatic situation the patient is into. The perioperative procedure was
able to identify the risk during the phases of both the elective and the emergency cases, thus they will able to prevent the said risks. Because of its positive result and widely accepted the
procedure is much appreciated by the surgeons, anesthesiologist, internist, nurses and even other healthcare staff involve in the procedure. According to Magallanes from an old study the clinical
significance of perioperative medical care showed an approximately 80% of postoperative deaths on the surgical service were attributable to underlying medical conditions, whereas the 20% of the deaths were due to surgery or anesthesia.(Magallanes, 2002). A major benefit of having a dedicated perioperative service is the focus of improving and providing a better health service for patient.
Critical Evaluation of the Incident
In this case study the patient will be treated because of the sudden deterioration of the health of the patient. Consideration on her case must be done since she is 7 months pregnant. Evaluation of the procedure should be done carefully to avoid immature labor. Anesthesia and other medication should be properly computed and addressed to. Information to patients relative should be given to avoid confusion and other question.. The purpose is to cure the patient without endangering the baby on her womb and to be able to treat the mother successfully.
This is a case of a 23 year old female patient, weighing 60 kg, with 7 months amenorrhea, with Kock's spine at level D4-D5 with paraplegia, was posted for anterolateral decompression as a semi emergency operation. Amenorhhea is the abnormal absent of menstruation.(Medline Plus, 2005). Patient complained of back pain since 6 months; followed by weakness of both lower limbs and inability to walk since 7 days.
There was the past history of anorexia ...Download file to see next pages Read More
Share:
Tags
Cite this document
(“Non-Scheduled Perioperative Care Essay Example | Topics and Well Written Essays - 2000 words”, n.d.)
Non-Scheduled Perioperative Care Essay Example | Topics and Well Written Essays - 2000 words. Retrieved from https://studentshare.org/health-sciences-medicine/1510106-non-scheduled-perioperative-care

In accordance with a survey published by the U.S. General Services Administration in 2004 ‘the number of elderly people residing alone without living children or siblings is expected to reach 1.2 million in 2020 — up from about 600,000 just a decade ago’ (U.S. General Services Administration, 2004, online article). Apart from the elderly, people with disabilities – as well as those with severe problems of health - also require continuous assistance in all their activities. The care of people belonging in the above categories is likely to last for quite a long (in most cases for the rest of their lives); for this reason, appropriate changes in existing legislation are made periodically in order to meet the n...
7 Pages (1750 words) Report

Prior to 1945, there was no unified international prohibition on a unilateral resort to force and the UN Charter sought to radicalize international politics through a general prohibition on the use of unilateral force by member states. The prohibition was officially enshrined in Article 2(4) of the Charter, which provides that:
“All member states shall refrain in their international relations from the threat or use of force against the territorial integrity or political independence of any state, or in any other manner inconsistent with the Purposes of the United Nations”(UN Charter Article 2(4) 1945).
Despite the purported ban on the unilateral use of force, the parameters of Article 2(4)’s applicabili...
15 Pages (3750 words) Assignment

Hiring another company or the third party to man the operations of the fleet of vehicles can put the company down. That would be like dealing with new employees who are not really working for the company, and who do not know our products. It will also be tantamount to revealing the secrets of our products and company that we have treasured all through the years. The best option is to work on the fleet of vehicles and get the right people to handle the operations.
There are doubts as to the exact number of vehicles we have to purchase since these are all plans and some hypotheses. But we tried to scale down our output, made some estimates and inside surveys, and come out to some numbers, which were reached by calculating...
8 Pages (2000 words) Assignment

Consumer sovereignty principle illustrates the fact that in a free market economy the consumer is free to consume what he wants. However, the consumer’s sovereignty does not have meaning if he/she is unable to buy what he/she wants. This paradox is solved through government intervention in the provision of those merit goods such as health care and education. On the other hand, agency theory indicates that conflicts between principals (e.g. shareholders or owners) and agents (e.g. managers) occur as a result of the latter misrepresenting facts and misinterpreting information so that resources can be diverted to uses which they regard as more lucrative. Since principals cannot themselves carry out the task of managing the busi...
8 Pages (2000 words) Case Study

Even so, we particularly think of scientists as the ones responsible for the destruction caused during World War II. In spite of the uses of atomic physics in improving our daily life most usually associate it with Hiroshima and Nagasaki and the atomic bombings that changed the way, people think about science.
Rhodes describes that the development of atomic physics began with Rutherford’s experiment on gold sheets which lead to the idea of what an atom is like. This model of the atom was not perfect but even so, it did provide a basic idea about the arrangement of sub-atomic particles within an atom. Rutherford’s model was supported by the discovery of the neutron by Chadwick. This model was further improved later...
7 Pages (1750 words) Essay

This is also the position Stone (2007) takes in the quote under discussion.
Furthermore, Stone goes on to declare that Australia has been very slow to implement this practice as compared with other countries and government agencies. One of the primary reasons is that the public policy system in Australia is quite complex and the decision-makers have not come into agreement on where to place it in the policy matrix. This leaves Interprofessional Practice and Education in the dark (or the cold) as far as strategic planning for implementation as well as placing itself within the funding cycles of the government disbursements. (Stone, 2007)
Policies are created in order to put in place how politicians and government official...
6 Pages (1500 words) Assignment
sponsored ads
Save Your Time for More Important Things
Let us write or edit the essay on your topic "Non-Scheduled Perioperative Care" with a personal 20% discount.
GRAB THE BEST PAPER

Let us find you another Essay on topic Non-Scheduled Perioperative Care for FREE!