The Conflict Between Medical Research and Medical Ethics - Essay Example

Comments (0)
Add to wishlistDelete from wishlist
Cite this document
Summary
The paper "The Conflict Between Medical Research and Medical Ethics" states that the use of humans as subjects of medical research experimentation cannot be avoided if we want the world to be rid of viruses and other maladies that threaten to exterminate man from the face of the earth…
Download full paperFile format: .doc, available for editing
HIDE THIS PAPERGRAB THE BEST PAPER94% of users find it useful 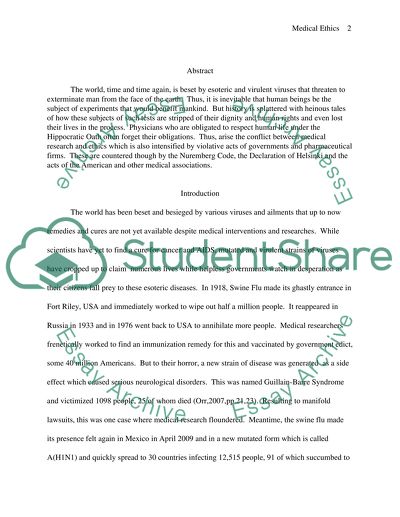 Extract of sample "The Conflict Between Medical Research and Medical Ethics"

Download file to see previous pages The world has been beset and besieged by various viruses and ailments that up to now remedies and cures are not yet available despite medical interventions and researches. While scientists have yet to find a cure for cancer and AIDS, mutated and virulent strains of viruses have cropped up to claim numerous lives while helpless governments watch in desperation as their citizens fall prey to these esoteric diseases. In 1918, Swine Flu made its ghastly entrance in Fort Riley, USA and immediately worked to wipe out half a million people. It reappeared in Russia in 1933 and in 1976 went back to the USA to annihilate more people. Medical researchers frenetically worked to find an immunization remedy for this and vaccinated by government edict, some 40 million Americans. But to their horror, a new strain of the disease was generated as a side effect that caused serious neurological disorders. This was named Guillain-Barre Syndrome and victimized 1098 people, 25 of whom died (Orr,2007,pp.21,23). Resulting in manifold lawsuits, this was one case where medical research floundered. Meantime, the swine flu made its presence felt again in Mexico in April 2009 and in a new mutated form which is called A(H1N1) and quickly spread to 30 countries infecting 12,515 people, 91 of which succumbed to death (Reuters, http://http://h1n1virus.us). In most of these cases, governments, in their desire to contain the disease, forcibly vaccinate those afflicted with the antiviral drug Tamiflu or Relenza which medical researchers had come up with to fight the mutated swine flu disease
(Reuters, http://h1n1virus.us). Other virulent viruses that made medical researchers work against time to halt them before they bring down more people were the Asian Flu which originated in China in 1957 and killed some 70,000 Americans and 2 million people globally (Orr,2007,p.21); the Ebola Virus which internal and external hemorrhagic symptoms were truly frightening but which was contained only within Zaire and Sudan where it wiped out 400 people (Williams & Wilkins,2008,p.1010); the Avian flu in 1997; SARS in 2003(Friedlander,2009,pp.111-7) and HIV/AIDS virus, first identified in 1981 but which up to now continues to rage and has already killed 2.1 million people while infecting 33.2 million people worldwide (UNAIDS, WHO,2007).
The Role of Modern Medical Research
Hereinabove, it is clear that medical research has to be maximized in order to save lives from all these virulent strains of viruses that threaten to wipe out humanity from the face of the earth. Only the efforts of medical researchers can save humanity from life-threatening devastation of the magnitude of bubonic plague which once wiped out of existence 1/3 of Europe or 25 million people from 1346-50 alone. The pioneering efforts of medical researchers to discover drugs such as streptomycin, gentamicin, tetracyclines and chloramphenicol in order to put to stoppage the havoc of devastation inflicted by The Black Death all over the world from 542 to 1950, was credited with putting to end that plague after it immolated 137 million lives. ...Download file to see next pagesRead More
Share:
Tags
Cite this document
(Conflict Between Research and Ethics Essay Example | Topics and Well Written Essays - 2250 words, n.d.)
Conflict Between Research and Ethics Essay Example | Topics and Well Written Essays - 2250 words. https://studentshare.org/health-sciences-medicine/1506351-conflict-between-research-and-ethics
(Conflict Between Research and Ethics Essay Example | Topics and Well Written Essays - 2250 Words)
Conflict Between Research and Ethics Essay Example | Topics and Well Written Essays - 2250 Words. https://studentshare.org/health-sciences-medicine/1506351-conflict-between-research-and-ethics.
“Conflict Between Research and Ethics Essay Example | Topics and Well Written Essays - 2250 Words”. https://studentshare.org/health-sciences-medicine/1506351-conflict-between-research-and-ethics.
Comments (0)
Click to create a comment or rate a document

Conflict Between Research and Ethics Paper

7 Pages(1750 words)Essay
sponsored ads
Save Your Time for More Important Things
Let us write or edit the essay on your topic "The Conflict Between Medical Research and Medical Ethics" with a personal 20% discount.
GRAB THE BEST PAPER

Let us find you another Essay on topic The Conflict Between Medical Research and Medical Ethics for FREE!