Comments (0)
Add to wishlistDelete from wishlist
Cite this document
Summary
Mental health issues have been around us as long as there has been a semblance of civilisation. While many of the stigmas and social issues connected with mental health have been overcome by society, a lot remains to be done before we can arrive at a position that provides optimal care for mental health patients without stigmatising them or lowering their worth…
Download full paperFile format: .doc, available for editing
HIDE THIS PAPERGRAB THE BEST PAPER96.5% of users find it useful 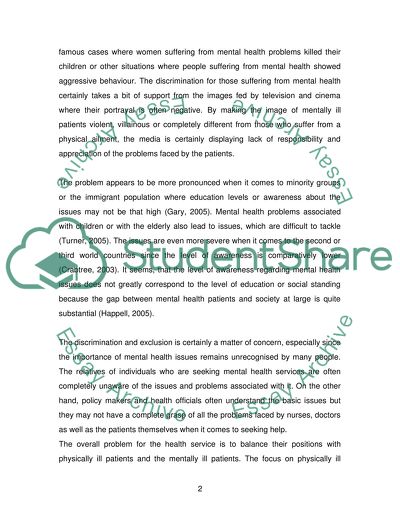 Download file to see previous pages Happell (2005) describes an incident, during which she experienced a derogatory remark for a patient suffering from mental health issues. She reports that, "The remark, which was made in an official capacity, questioned, perhaps even refuted, one of the most basic human rights for people diagnosed with a mental illness" (Happell, 2005) and that the remark infuriated her. Considering that the words were coming from a nurse, who had been involved with handling mental health patients, it prompted an examination of how negative stereotypes and stigmatisation of mental health patients continued despite legal barriers.
The indignation of mental health professionals and nurses over the discrimination and stigma attached to their patients is certainly well placed but the reasons for the stigma itself are many and complex. It is a matter of concern and some disappointment that in spite of all the progress made by our society, there are still problems which remain when it comes to dealing with and presenting patients, who have mental health problems. Wherever the blame for the stigma associated with mental health patient lies, it has to be accepted, that there is a problem which needs to be dealt with. Harris (2004) suggests that the representation of mental health patients in the media takes a large part of this blame along with the famous cases where women suffering from mental health problems killed their children or other situations where people suffering from mental health showed aggressive behaviour. The discrimination for those suffering from mental health certainly takes a bit of support from the images fed by television and cinema where their portrayal is often negative. By making the image of mentally ill patients violent, villainous or completely different from those who suffer from a physical ailment, the media is certainly displaying lack of responsibility and appreciation of the problems faced by the patients.
The problem appears to be more pronounced when it comes to minority groups or the immigrant population where education levels or awareness about the issues may not be that high (Gary, 2005). Mental health problems associated with children or with the elderly also lead to issues, which are difficult to tackle (Turner, 2005). The issues are even more severe when it comes to the second or third world countries since the level of awareness is comparatively lower (Crabtree, 2003). It seems, that the level of awareness regarding mental health issues does not greatly correspond to the level of education or social standing because the gap between mental health patients and society at large is quite substantial (Happell, 2005).
The discrimination and exclusion is certainly a matter of concern, especially since the importance of mental health issues remains unrecognised by many people. The relatives of individuals who are seeking mental health services are often completely unaware of the issues and problems associated with it. On the other hand, policy makers and health officials often understand the basic issues but they may not have a complete grasp of all the problems faced by nurses, doctors as well as the patients themselves when it comes to seeking help.
The overall problem for the health service is to balance their positions with physically ill patients and the mentally ill patients. The focus on physically ill pa ...Download file to see next pagesRead More
Share:
Tags
Cite this document
(“Mental Health Care Essay Example | Topics and Well Written Essays - 3750 words”, n.d.)
Retrieved from https://studentshare.org/health-sciences-medicine/1505201-mental-health-care

Worse, because the family sometimes cannot afford to cover their medical expenses, these mentally ill patients end up with no medical care at all; they are forced to suffer the debilitating symptoms of their mental illness and to be subjected to worsening mental and general health conditions.
This paper shall discuss the lack of insurance among mentally ill patients. It shall first describe the mental health issue and the student’s position on such an issue. This paper shall also explain why this position is important and the relevance of the position to nursing practice, the mentally ill, and society. The rationale of this position shall be clearly explained and two factors that contribute to this issue shall be identi...
8 Pages(2000 words)Assignment
sponsored ads
Save Your Time for More Important Things
Let us write or edit the essay on your topic "Mental Health Care" with a personal 20% discount.
GRAB THE BEST PAPER

Let us find you another Essay on topic Mental Health Care for FREE!