Comments (0)
Add to wishlistDelete from wishlist
Cite this document
Summary
The respiratory system is composed mainly of the lungs, airways, diaphragm, windpipe, throat, mouth, and nasal passages. The portal of entry of air is in the nasal cavity. The primary function of the respiratory system is to supply the blood with oxygen in order for the blood to deliver oxygen to all parts of the body…
Download full paperFile format: .doc, available for editing
HIDE THIS PAPERGRAB THE BEST PAPER97.1% of users find it useful 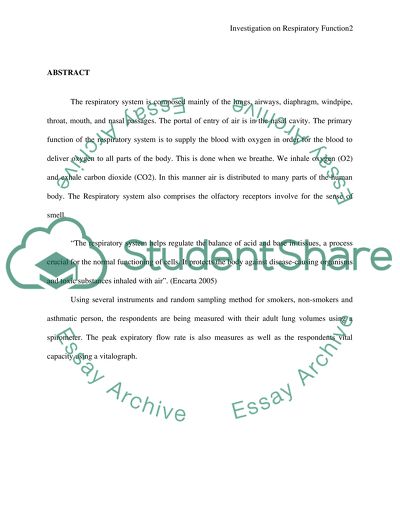 Download file to see previous pages It protects the body against disease-causing organisms and toxic substances inhaled with air". (Encarta 2005)
Using several instruments and random sampling method for smokers, non-smokers and asthmatic person, the respondents are being measured with their adult lung volumes using a spirometer. The peak expiratory flow rate is also measures as well as the respondents vital capacity using a vitalograph.
The aim of this practical is to introduce the student to measuring human lung volumes, together with observing the control of respiration. Respiration refers to the overall gaseous exchange between the atmosphere, blood and body cells. In this context, respiration is taken to mean the movement of air into (inspiration) and out of (expiration) of the lungs. More accurately, inspiration and expiration is termed ventilation. An inspiration followed by expiration is called one respiration. The number of respirations per minute gives the respiratory rate (RR). A healthy adult averages a respiratory rate of between 12 to 18 respirations per minute. During this respiratory process, various amounts of air are exchanged between the lungs and the atmosphere. These amounts of air are referred to as lung volumes, which can be recorded using a spirometer, or a peak flow meter which is a measuring instrument used to know the vital capacity of lungs.
Respiration is controlled by the levels of carbon dioxide (CO2) in the blood. Chemoreceptors within the arterial system detect CO2 levels and this information is relayed via afferent nerves to the central nervous system. High CO2 levels in the blood (hypercapnia) leads to increased respiratory rates (hyperventilation). Low CO2 levels (hypocapnia) leads to respiration rates which are slow and shallow. This is termed hypoventilation.
Spirometric tests and peak expiratory flow are the tests used primarily to assess lung function (Laszlo 1991, p311). There are many other tests involved in assessing lung function, some of which will be undertaken during this practical session, along with consideration of the homeostatic control of respiration.
METHODOLOGY
This study is conducted randomly by examining smokers, non smokers and asthmatics. Vitalograph and spirometer are the instruments used to measure the Forced vital capacity, Forced expiratory volume and Peak Expiratory Flow and Vital capacity of the respondents.
RESULTS AND DISCUSSION
Effects on smokers and non smokers:
It was observed that both women who are non smokers have low readings in Forced vital capacity, Forced expiratory volume and Peak Expiratory Flow.
In checking the inspiratory reserve volume and expiratory reserve volume, normally, the volume of air that comes out is almost similar to what a person exhales.
Table 3 shows the result of each person's Predicted PEF, Vitalograph PEF and Peak flow rate. Rob being the youngest attained the highest measurement of the three key result areas.
When the respondents were checked with regards to the amount of poison that they are carrying from their blood, it was expected and observed that non smokers have lesser findings compared to smokers. Significantly, the presence of poison that is ...Download file to see next pagesRead More
Share:
Tags
Cite this document
(“Respiratory Function Lab Report Example | Topics and Well Written Essays - 1500 words”, n.d.)
Respiratory Function Lab Report Example | Topics and Well Written Essays - 1500 words. Retrieved from https://studentshare.org/health-sciences-medicine/1500221-respiratory-function

CHECK THESE SAMPLES OF Respiratory Function

...? Respiratory - Chronic Obstructive Pulmonary Disease - Number and Number Number of Words: 536 Introduction Chronic obstructive pulmonary disease (COPD) is a clinical case wherein the patient is experiencing airflow obstruction (NICE, 2004, p. 5). In relation to NICE guidelines, this study will examine and evaluate the treatment guidelines when treating patients with COPD. Based on the evaluation report, whether or not the NICE guidelines on COPD are valid and worth reproducing will be explained in details. Evaluation of the Treatment Guidelines of NICE The NICE guidelines with regards to the treatment and care for patients with COPD is very informative in the sense that the NICE guidelines provided a clear explanation...
2 Pages(500 words)Dissertation

...?Introduction Respiratory protection is required in a number of different work situations where the personnel are exposed to harmful substances that may be inhaled or ingested. Such situations involve work areas where there is harmful dust, smoke, gases, sprays, fogs, mists and vapors. In case that these hazards are not protected against, there are chances that the personnel exposed to these things may suffer from lung impairment, cancer as well as other diseases. The use of respiratory protection ensures that millions of workers escape damage to their respiratory systems. (OSHA, 2011) However the kind of respiratory protection required for each situation is different and...
3 Pages(750 words)Essay

Form and Function of Respiratory System

...﻿Form and Function of Respiratory System Every cell in the body requires a steady and continuous supply of oxygen to function and survive. This is accomplished by the respiratory system. The respiratory system is a system of organs, which is involved in carrying out the process of respiration. The latter involves the inhalation of air for the oxygen component, and its exhalation to expel carbon dioxide. As the body does not store oxygen, it is very important for this system to function precisely, and any disruption for more than a few minutes could lead to death (Britannica Concise Encyclopedia). Form and Function The...
4 Pages(1000 words)Essay

...?Topic: Respiratory Respiratory system proves to be one of the most essential parts of human bodies since it involved the inhale and exhaleof air thereby allowing oxygen to enter the body and carbon dioxide to exhale out of the body. Thus an understanding of the system and its functions is also necessary. This is primary because there are several factors that may affect the properties and functioning of the system. This particular study focuses on such an understanding and focuses on the structure and function of the respiratory system and the associated diseases and diagnosis as well. Introduction: In terms of physiology, the process of...
7 Pages(1750 words)Essay

...Respiratory Therapy This is a soap S is for ive how the patient feels o is observation of the patient an assessment of the patient p planof treatment for the patient This report is about a 79 year old man admitted to the hospital because of the "cough, fever and right lobe infiltrate." He smoked about 2 packs of cigarettes per day since he was 14, and drank alcohol when out of duty. His health at 65 when he retired was good. At 63 he was admitted to the hospital due to a myocardial infarction where he was treated and recovered well. Nevertheless he continued to drink 4 to 6 bottles of beer a day; he exercised every day by power walking and in his yard S: Before his admission to the hospital, the patient reported "flu...
2 Pages(500 words)Essay

...Management Service: The functions of the Respiratory Specialist will include the provision of specialist inputs for COPD. The job description and the service specifications of the Practitioner are provided in Appendix I. As the first step consultations will be offered by the practitioner to the patients referred to the Respiratory Service followed by the construction of a Patient Care Plan. The next step will be that the patients will be oriented to the practice for a day to day management of the illness and a periodic review of the practice of the patients will be undertaken to monitor the improvements. However the clinical responsibility of the patients' treatment would still be that...
18 Pages(4500 words)Research Paper

...thus resulting into the destabilization of the appropriate checks and balances necessary for normal growth and functioning of body organs and organ systems. While doctors professionally explain why people develop diseases, and others don’t, researchers have particular singled out specific risk factors that increase individual’s vulnerability to developing certain types of diseases or conditions. The effects of cigarette smoking, alcohol abuse and high fat diet on the development of respiratory and cardiovascular diseases are well documented. It is however difficult to disentangle the effects of smoking and alcohol since the two tends to be correlated because many smokers are also heavy alcohol abusers....
12 Pages(3000 words)Essay

...Respiratory therapy/Radiology There are numerous standards that govern the care that is given to patients are every given level. These standards areset to ensure that every client receives the highest level of medical care in cases of emergencies as well as other cases. As such, it is mandatory that medical professionals observe these standards to avoid casualties as well as other conditions that may affect the health of the patients due to negligence. In the case study under analysis, there are several breaches to the standards of care that were either due to negligence of inactivity of the professionals that were responsible for the health of the plaintiff. There are several standards and guidelines that dictate the...
2 Pages(500 words)Essay
sponsored ads
Save Your Time for More Important Things
Let us write or edit the lab report on your topic "Respiratory Function" with a personal 20% discount.
GRAB THE BEST PAPER

Let us find you another Lab Report on topic Respiratory Function for FREE!